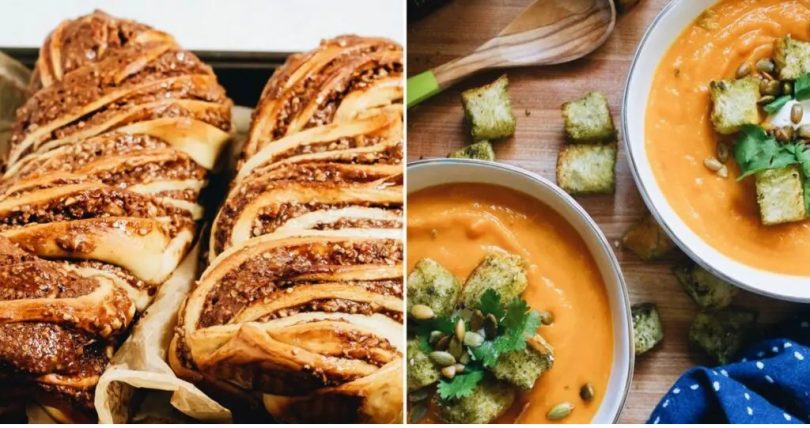 Need some vegan Rosh Hashanah recipes? We’ve got you covered!

The annual holiday, which is also known as the Jewish New Year, literally translates to “head [of] the year.” It is the first of the Jewish High Holy Days and is widely regarded as time to celebrate and enjoy festive meals with your friends and loved ones.

While Rosh Hashanah falls on different days every year because observance is based on the Hebrew calendar, it typically occurs in late summer or early fall. In 2021, Rosh Hashanah will be observed beginning at sunset on September 6, and will conclude on the evening of September 8.

In addition to the celebratory meals, Rosh Hashanah is also observed by praying in synagogue, engaging in personal reflection, and the sounding of the shofar. The shofar, which is a ram’s horn, is typically sounded by a male member of a given congregation approximately 100 times. Each one of the loud blasts, or teruah, is part of a special sequence.

Though there isn’t one succinct reason why the shofar is blown on Rosh Hashanah, it is mentioned in the Torah several times. Some modern scholars believe that the sounding of the shofar is meant to inspire a reverence toward God, while others see it as a trust in God’s plan for the year ahead.

What foods are eaten during Rosh Hashanah?

Unlike some other Jewish holidays (such as Passover) that include rules for what observers cannot eat, on Rosh Hashanah there is an emphasis on what people can and should eat in order to have a happy and successful new year. Generally speaking, this includes many sweet foods, as they are thought to usher in a sweet start to the year.

Apple slices dipped in honey are probably the most symbolic food of the holiday, as they represent our hopes for a sweet and fruitful year. In ancient times, apples became a symbol of the Jewish people in relationship to God, while honey (plant-based or otherwise) was the most accessible sweetener in the Jewish world. With that in mind, honey is also commonly used to glaze vegetables or protein on Rosh Hashanah, and it is also used to bake honey cakes, which are typically eaten for dessert.

Additional foods often eaten during Rosh Hashanah include challah, which is often shaped into spirals or rounds to symbolize continuity and also dipped in honey, as well as other sweet treats such as raisins and pomegranate seeds.

Leeks are also often consumed on Rosh Hashanah thanks to the etymology of the word in Hebrew, which sounds a lot like the word “karet”, and translates to “cut.” Thus, eating leeks is supposed to mean that those who wish ill on us will be cut off.

Last but not least, since Rosh Hashanah often coincides with the start of fall, it’s not uncommon to eat autumnal foods to celebrate the holiday, such as squash and carrots.

Sephardic Jews often hold a Rosh Hashanah seder that is similar to a Passover seder because a series of symbolic foods are eaten prior to the meal. Typically this includes a pomegranate, date, string bean, beet, pumpkin, leek, and fish head. Each food symbolizes a wish for prosperity and health in the year ahead.

How to be vegan during Rosh Hashanah

While honey is a commonly used ingredient during Rosh Hashanah because of its aforementioned symbolism related to the new year, it can often easily be replaced with vegan honey or plant-based sweeteners like agave nectar and maple syrup.

Since the holiday places an emphasis on fresh fruits and vegetables, it’s not difficult to prepare a vegan Rosh Hashanah meal. In fact, eating a vegan meal is especially easy for Jews who keep kosher, since following a kosher diet means (among other things) that meat and dairy cannot be consumed as part of the same meal. This is why many Jewish dishes are made with naturally vegan foods including grains, vegetables, and nuts.

LIVEKINDLY reached out to food bloggers of Jewish faith for some of their favorite vegan Rosh Hashanah dishes. Each blogger included personal details about what the dish means to them.

“It’s hard to imagine a Rosh Hashanah celebration without challah. Vegans might wonder how to make this traditional bread without eggs, but fortunately, it’s surprisingly easy to make egg-free challah,” explains Nava Atlas. “My secret ingredient is pureed butternut squash, which makes the bread as tender and golden as the original.”

Atlas continues: “There’s something about this challah that, for me, feels specific to Rosh Hashanah’s symbolic rituals of renewal and the arrival of fall, my favorite season. That being said, this challah is perfect for vegan Shabbat dinners, so feel free to make it any time of year!”

“Carrots are traditional for Rosh Hashanah as they symbolize our hope that our merits will increase in the year to come. Carrot harissa soup with za’atar challah croutons is the perfect way to enjoy them,” notes Amy Kritzer Becker. “It’s vegan, hearty, healthy, and even gluten-free if you leave off the croutons. Harissa adds the perfect amount of spice that balances out the naturally sweet carrots.”

“Rosh Hashanah has many symbolic foods, and this recipe for three sisters stuffed squash includes several of them—squash, leeks, and small beans or peas,” says Yael Cohen. “I love how hearty and satisfying the squash is, and how easy it is to prepare and serve to a large or small group.”

She adds: “The ingredients celebrate the autumn harvest and have several flavor and textural contrasts. What lovelier a symbol for a hopefully new year than a dish stuffed full of promise and brimming with goodness?”

“This sweet basmati rice with carrots and raisins is so reminiscent of Rosh Hashanah for us.  Our mom made it every year for the holidays and we always looked forward to it,” note sisters Vicky Cohen and Ruth Fox. “This dish brings us straight to our childhood home in Barcelona.”

The siblings add: “We also discovered from some of our blog readers that Persian and Afghan cuisines have dishes that are very similar, which we find very fascinating since our family has no tie to those countries.”

“Kugel is a good dish for the high holidays because you can make it in advance and it’s a delicious crowd pleaser,” says Kenden Alfond. This meat-free dish is made with an array of vegetables such as mushrooms and onions, and it gets its heartiness thanks to silken tofu, vegan eggs, and breadcrumbs.

“This vegan kugel is pareve [made without meat or milk] so you can add it to any meat or dairy meal,” Alfond adds.

“Babka, a swirly braided bread originating in Poland and the Ukraine, is usually made with nuts, cinnamon, and sometimes chocolate, like this one,” explains Elizabeth Madsen. “My grandparents were Polish (and Lithuanian) Jews, and made babka often. This vegan chocolate babka is an homage to my deceased grandparents who made food that kept the Jewish tradition alive.”

Madsen adds: “This is an important concept during Rosh Hashanah, when we are starting anew, making resolutions, and eating sweet things to celebrate a sweet new Jewish year. Eating foods they ate ‘in the old country’ helps me keep alive the traditions of my people while enjoying food in a cruelty-free way, something else that’s very important to me.”

“Rosh Hashanah, the Jewish New Year,  is all about symbolic foods. Honey Cake is the most traditional Rosh Hashanah cake as it is a symbol for a sweet year to come,” notes Estee Raviv. “The combination of apples and honey (or pure maple syrup) is amazing as is, and it gets even better combined in a cake! The cake becomes just perfectly sweet and moist.”

And you can make this treat long after the Jewish New Year has passed. “This cake recipe is great year round and not only for Rosh Hashanah,” Raviv adds.