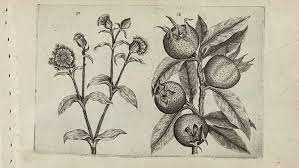 Medieval Europeans were fanatical about a strange fruit that could only be eaten rotten. Then it was forgotten altogether. Why did they love it so much? And why did it disappear?I

In 2011, archaeologists found something unusual in a Roman toilet.

The team were excavating the ancient village of Tasgetium (now Eschenz, Switzerland), ruled by a Celtic king who was personally given the land by Julius Caesar. It was built on the banks of the river Rhine, along what was then an important trade route – and as a result, its remains have been steeped in water ever since. What should have rotted away centuries ago was uncovered in a remarkable state of preservation, protected by the lack of oxygen in the boggy conditions.

It was here that, nestled among the remains of familiar foods such as plums, damsons, cherries, peaches and walnuts in an ancient cesspit, the archaeologists found 19 curiously large seeds. Though they were, let’s say, “deposited” there nearly 2,000 years ago, they almost looked fresh enough to have been found yesterday – except that the fruit they belong to is now so obscure, it can baffle even professional botanists.

The polite, socially acceptable name by which it’s currently known is the medlar. But for the best part of 900 years, the fruit was called the “open-arse” – thought to be a reference to the appearance of its own large “calyx” or bottom. The medlar’s aliases abroad were hardly more flattering. In France, it was variously known as “la partie postérieure de ce quadrupede” (the posterior part of this quadruped), “cu d’singe” (monkey’s bottom), “cu d’ane” (donkey’s bottom), and cul de chien (dog’s bottom)… you get the idea.

And yet, medieval Europe was crazy about this fruit.

The fruit made regular appearences in artworks, such as this tapestry from around 1500 (Credit: Alamy)

The first record of the medlar’s existence is a fragment of Greek poetry from the 7th Century BC. Eventually the fruit is thought to have fallen into the hands of the Romans, who brought it to southern France and Britain. In 800AD, Charlemagne included it on a list of plants that were mandatory in the king’s many gardens, and nearly 200 years later, the English abbot and writer Ælfric of Eynsham first committed its rather rude sobriquet to the public record.

From there, the fruit’s popularity steadily increased. It became a staple of medieval monasteries and royal courtyards, as well as public spaces such as village greens.

It’s featured in Chaucer’s Canterbury Tales, Shakespeare’s Romeo and Juliet, and the two-time queen consort Anne of Brittany’s Book of Hours – a kind of illustrated religious manuscript popular in the Middle Ages. Henry VIII had the medlar planted at Hampton Court, and gifted his French counterpart with large quantities.

The fruit reached its peak in the 1600s when it was widely grown across England – as ordinary as apples, pears, mulberries and quince. From this lofty pinnacle, it underwent a steady decline. It was still widely known until the early 20th Century, though less celebrated. Then in the 1950s it abruptly vanished from the public consciousness altogether.

Once a household name, described by one Roman commentator as amounting “almost to a craze“, now the medlar is primarily grown as a romantic relic from the past – a niche plant for eccentric gardeners and a historical curiosity at palaces and museums.

Just a few decades after it disappeared, it was already mysterious to many greengrocers. In 1989, one American academic wrote that “probably not one in a hundred” botanists had seen a medlar. Today it’s not sold at a single British supermarket. Where there are still plants growing in public spaces, they often go unrecognised and are left to rot on the ground.

What was it about this strange fruit that gripped medieval Europe, and why did it disappear?

Medlar trees are unfussy and long-lived, with even the most venerable specimens producing hundreds of fruit each year (Credit: Alamy)

It’s not known for sure where the medlar originated, but some believe that it was domesticated around 3,000 years ago in Western Asia, by the Caspian Sea – where there are many different types to this day.

“Medlar” and “open-arse” can be used to refer to both the fruit and the shrub-like tree on which it’s grown, Mespilus germanica – a close relative of roses, crab apples, and quinces. With a tangle of twisted, contorting branches at the base and a satisfying rounded canopy of elongated leaves, it was not only renowned for its fruit, but its aesthetic. Each spring, this is studded with single, star-shaped flowers which appear at such regular intervals that they could almost be painted on. By the autumn, the tree is a kaleidoscope of colours – green, yellow, brown and blood red.

The fruit are unusual for two reasons. Firstly, they’re harvested in December – making them one of very few sources of sugar that would have been available in medieval winters. Secondly, they only become edible when they’re rotten.

When they’re first picked, medlars are greenish brown and resemble oddly-shaped onions or alien-looking persimmons. If they’re eaten straight away, they can make you violently ill – one 18th Century doctor and botanist said that they cause diarrhoea. But if you put them in a crate of sawdust or straw and forget about them for several weeks, they gradually darken and their hard, astringent flesh softens to the consistency of a baked apple.

The exact chemical mechanism involved remains elusive, but broadly, enzymes in the fruit break down complex carbohydrates into simple sugars such as fructose and glucose, and it becomes richer in malic acid – the main culprit behind the sour taste of other fruits such as apples. Meanwhile, harsh tannins, which contribute to the bitter astringency of younger red wines, and antioxidants such as ascorbic acid (Vitamin C), are depleted.

The process is known as “bletting”, a word made-up by a botanist who noticed there wasn’t one in 1839. The result is an ultra-sweet fruit with a complex flavour, like over-ripe dates mingled with lemons, and a slightly grainy texture. “When they are perfectly ripe, they are absolutely delicious to eat on their own,” says Jane Steward, who planted 120 medlar trees at her Norfolk orchard in 2015 – possibly the largest collection in the UK.

However, if rotten fruit doesn’t sound particularly enticing to you, you’re in good company. In fact, even when the fruit was at its height of popularity, it still divided opinion.

A humorous research paper from 1989 gathered together some classic put-downs, including “At best, it is only one degree better than a rotten apple” – from a 19th Century gardening book – and “the medlar is not… worth a turd until it’s ripe, and then it tastes like shit” – reportedly the opinion of an anonymous medieval author.

Then there’s the question of how to eat a medlar. In less genteel company, people would have simply held one up to their face and sucked the flesh out directly. On the other hand, in aristocratic circles the fruit was commonly brought to the table along with the cheese course – still coated in the sawdust in which it was bletted – and scooped out with a spoon. It could also be baked, roasted, made into jelly, added to tarts, or turned into brandy or cider.

Apart from the obvious sexual allusions that can be made with a fruit with so many vulgar nicknames, it’s thought that the medlar’s quirky need for rotting partly explains why they made it into so many literary works – medieval audiences lapped up the symbolism of a fruit that is rotten before it’s ripe. In Chaucer’s Canterbury Tales, he draws a comparison with the fruit – “But if I fare as dooth an open-ers” – to lament the onset of old age and how he doesn’t think men achieve their full ability to lie, boast, covet and become angry until they’re weakened and elderly.

However, bletting may also have been the medlar’s downfall. The fruit was still a familiar winter staple throughout the late 19th and early 20th centuries, and during World War Two, the British government encouraged people to forage for it – it’s included in this Dig For Victory jam-making advice. Then soon afterwards, it vanished from the shops forever.

One possible reason is that tropical fruits such as bananas and pineapples became cheaper, and these are harvested year-round, so there was no longer any need for this winter delicacy.

But Steward’s experiences in the industry also hint that the awkward extra step of bletting, combined with the fact that no one wants to spend days outside picking fruit in the winter, may have helped to finish it off. “We have romantic notions about sunny days and wicker baskets and open toe sandals in this country – not standing around on short-daylight days harvesting fruit,” she says.

Today medlar trees can still be found scattered across Europe, sometimes posing as hedges in the countryside or ornamental trees in gardens – they’re still there, but they have to be tracked down. Steward’s personal favourite was planted at Langley Abbey in Norfolk in around 1820. “It’s still pushing out fruit 200 years later – it’s breathtakingly beautiful,” she says.

But this is not quite the end of the story.

In the medlar’s native territory near the Caspian Sea, the fruit remains as popular as ever. It’s still widely grown in Iran, Azerbaijan, Kyrgyzstan, Georgia and Turkey, where it’s sold in markets as musmula. Steward says she once received a message from a Kyrgyzstani family who had moved to England and were desperate to recreate the experience of foraging for wild medlars that they had to leave behind.

The plant also has a long history as a folk medicine in the region. In the rural province of Gīlān in northern Iran, medlar leaves, bark, fruits and wood are traditionally used to treat a range of ailments, such as diarrhoea, stomach bloating and menstrual irregularities.

Intriguingly, this is similar to how it was used in medieval Europe. The 17th Century botanist and doctor Nicholas Culpeper wrote that the medlar could be help women “when their courses flow too abundant”, and a poultice made from the dried fruit, beaten and mixed with cloves, nutmeg, red coral and the juice of red roses could be applied to ease the stomach.

Fast-forward to 2021, and the medlar is now not quite so little-known in Europe as it once was. It’s begun quietly sneaking back into public awareness – largely thanks to the efforts of enthusiasts such as Steward, who markets her own range of medlar products, including jam and gin.

If the trend continues, perhaps the fruit will soon have a new generation of unspeakable names to go by.