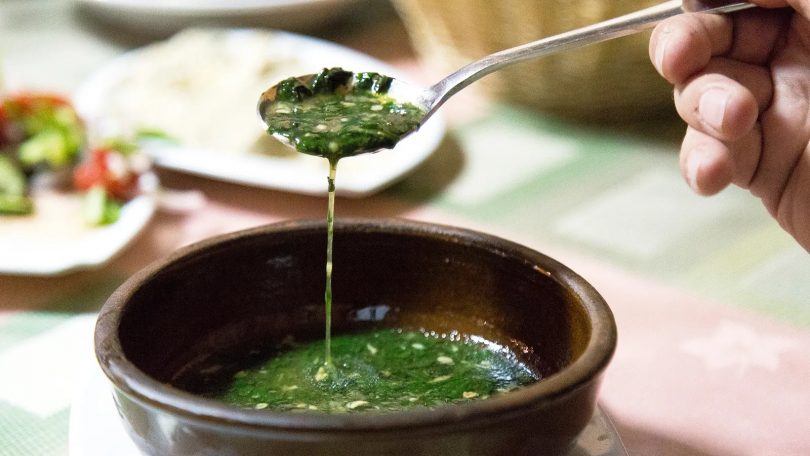 Dubbed the “food of kings”, the unassuming green gloop called molokhia was once outlawed in Egypt because of its alleged aphrodisiac effect.

“It’s easy to swallow, so Egyptian mothers feed their babies on it after nursing,” remarked Emad Farag, an employee at The St. Regis Cairo, as I slurped another spoonful of the mysterious moss-coloured soup. Of all the things I’d imagined I’d be dining on in Cairo’s swankiest new hotel, “posh baby food” was not it.

But this uniquely gummy concoction is no ordinary baby food. Pronounced “mo-lo-h-i-a”, but spelt innumerable ways, the unassuming green gloop was once the “food of kings” because of its curative powers. Originating from the word mulukia, which means “that which belongs to the royals”, legend has it that a healing soup made from the molokhia plant nursed an Egyptian ruler back to health in the 10th Century. And so, a stew worthy of pharaohs was born, and a royal veggie was crowned.

“As far back as you can trace the roots, people ate what was local, and what is local along the Nile is molokhia,” food historian-cum-food health writer Michelle Berriedale-Johnson said. To this day, 95% of Egyptians live along the fabled river’s life-giving banks and arc-shaped delta. 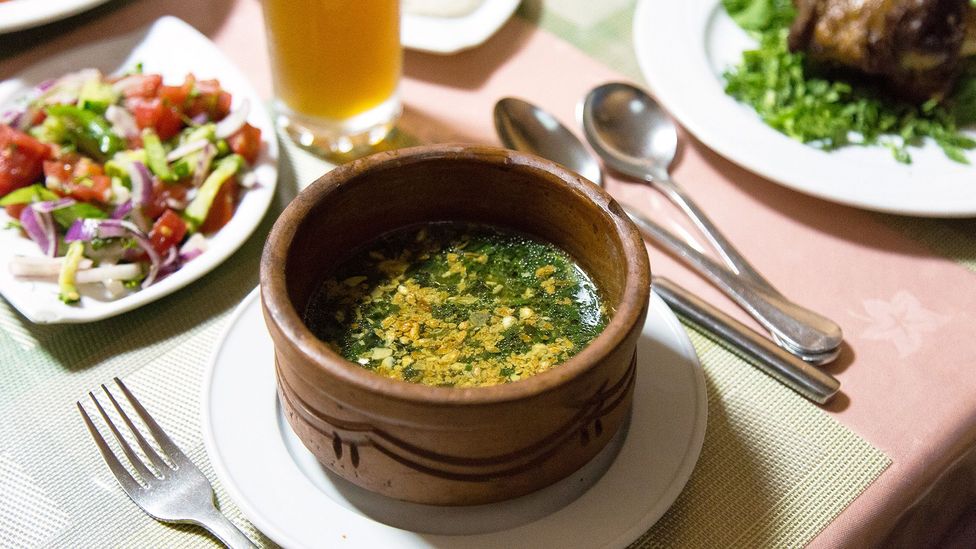 Molokhia is a staple of every Egyptian kitchen and is considered the country’s emblematic meal (Credit: Sarah Freeman)

“They were eating ful (a hearty fava bean stew) and molokhia in pharaonic times, and they’re eatingful and molokhia now, because that’s what grows and what suits their diet and the climate,” Berriedale-Johnson continued. “You’ll get leaves in some of the tomb paintings,” she said of the saw-toothed leaf vegetable that belongs to the mallow family.

In the book Treasure Trove of Benefits and Variety at the Table: A Fourteenth-Century Egyptian Cookbook, author Nawal Nasrallah writes: “The ancient Egyptians left no culinary recipes, but food remains from their tombs and coffin murals, that depict baking and other food-related activities, testify to the sophisticated level of their cuisine… These depictions also reveal the abundance of their produce such as Jew’s mallow (mulukhiyya).”

Despite its plentiful supply, molokhia wasn’t always available to the masses. According to folklore, the Caliph of Cairo (one of Egypt’s rulers from the 10th Century Fatimid dynasty) outlawed consumption of the viscous soup because of its alleged aphrodisiac effect on women. 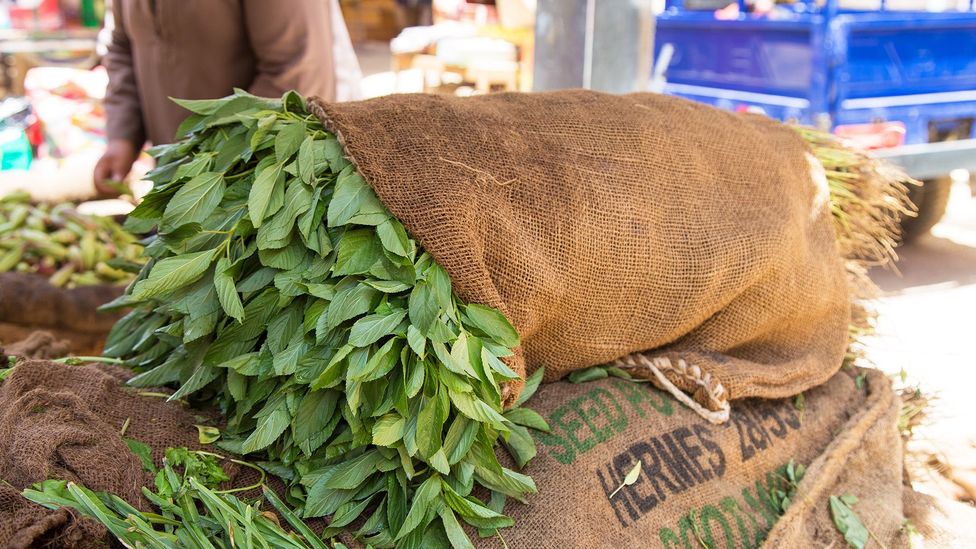 The molokhia plant grows along the Nile is sold at markets in Egypt (Credit: Sarah Freeman)

No longer the preserve of pharaohs, these days molokhia is a staple of every Egyptian kitchen. While the official national dish is koshary (a vegetarian medley of rice, chickpeas, macaroni and lentils) most Egyptians consider molokhia to be the country’s emblematic meal. The earthy and grassy flavoured at-home dish is ordinarily eaten in the evening – paired with rice, bread or meat. However, some purists (and children) will consume molokhia neat, as a lunchtime soup. It’s also a regular fixture on the menus of no-frills Egyptian restaurants like Cairo’s El Prince on Talaat Harb Street.

Molokhia’s for the rich and the poor

“It’s not an expensive vegetable,” Farag said. “Molokhia’s for the rich and the poor.” In Aswan’s Sharia as-Souq, I queued alongside a construction worker, bank manager and taxi driver to buy bunches of it from a rusty wheelbarrow manned by Mahmoud. The 15-year-old market vendor told me he sells 110 EGP ($7) of molokhia daily, harvested on his family’s one-hectare plot in nearby Abu El–Reesh.

Luckier stallholders get to shelter from the stifling sun under rainbow parasols lining the bazaar’s seven blocks, which run parallel to the Nile. I followed my nose to Al Reda spice store on Saad Zaghloul Street, where burlap sacks overflowed with dried hibiscus flowers, cumin and dried molokhia. The store’s third-generation owner Moustafa Mohammed told me that while his ancestors mademolokhia nashfa, which uses dried versus fresh leaves, he mops up his molokhia with baladi (Egypt’s ancient answer to pita). 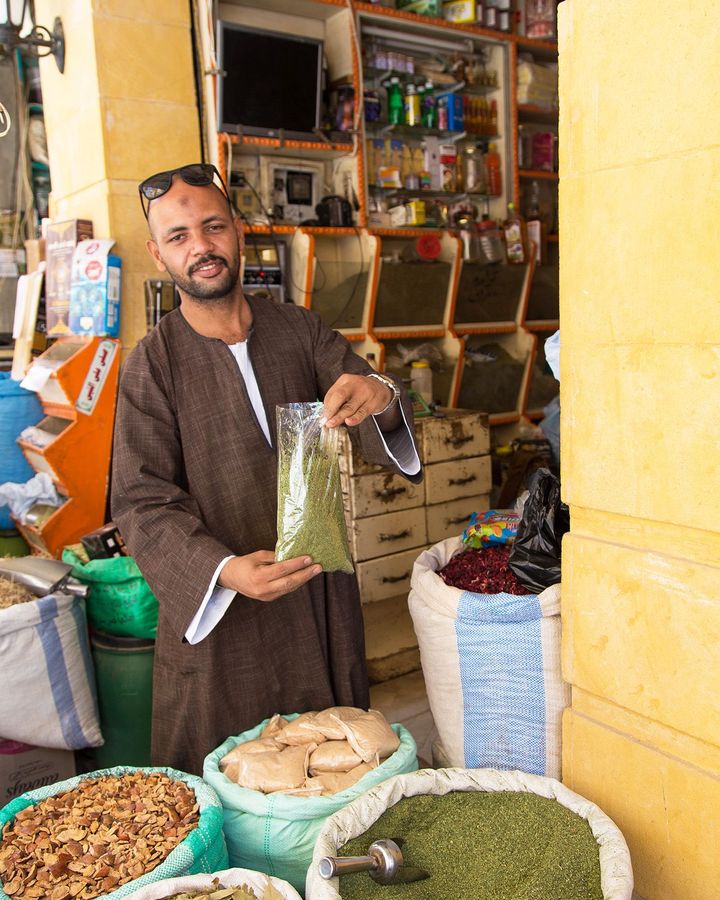 Family traditions and geography dictate how and what is eaten with molokhia. In coastal cities like Alexandria, locals devour molokhia bel gambary with shrimps. Meanwhile, in the country’s rural hinterland, it’s paired with poached rabbit – a meat of the privileged few in ancient Egypt.

Tarek Helmy – a semi-retired consultant from Cairo – folds the green gloop into rice, as his father did.

“Even the eating of molokhia can be different from one house to another,” Helmy told me over a lavish lunch at his home in a gated community on Cairo’s fringes. The invitation came about after a serendipitous meeting with one of Helmy’s close friends in Luxor.

Helmy is one of a growing number of upper middle-class Egyptians who’ve traded Cairo’s relentless din and dust for greened suburbia. Despite having deep pockets, he still delights in eating the slimy soup twice a week. “Good molokhia sticks to the rice rather than separating into a watery pool on the plate,” he explained. “I even flew my mother over to Dubai, when I lived there, to teach my cook how to make molokhia!” he added.

Stepping into Helmy’s spotless kitchen, I watched as his cook (also named Tarek), worked up a sweat rocking an arched blade to and fro over fresh molokhia leaves. Known as a makhrata, the mezzaluna-like utensil was created specifically for shredding molokhia. It’s a laborious task, which, it transpires, is key to molokhia’s uniquely mucilaginous (gum-like) texture – one that has tourists either loving or loathing the dish.

For those who can stomach the slime, their gut and waistline will thank them later. “It (molokhia) has all kinds of good digestive virtues,” Berriedale-Johnson said. A recent study published in the Journal of Ethnopharmacology reveals that its leaves can even prevent gut inflammation and obesity.

A superfood without the cult following or jacked-up prices, molokhia is packed with Vitamin C, E, potassium, iron and fibre. “It [molokhia] also contains certain antioxidant carotenoids and antioxidant elements, making a well-rounded and highly beneficial addition to your diet,” Cairo-based child nutritionist Mai Amer told me of the nutritional powerhouse. 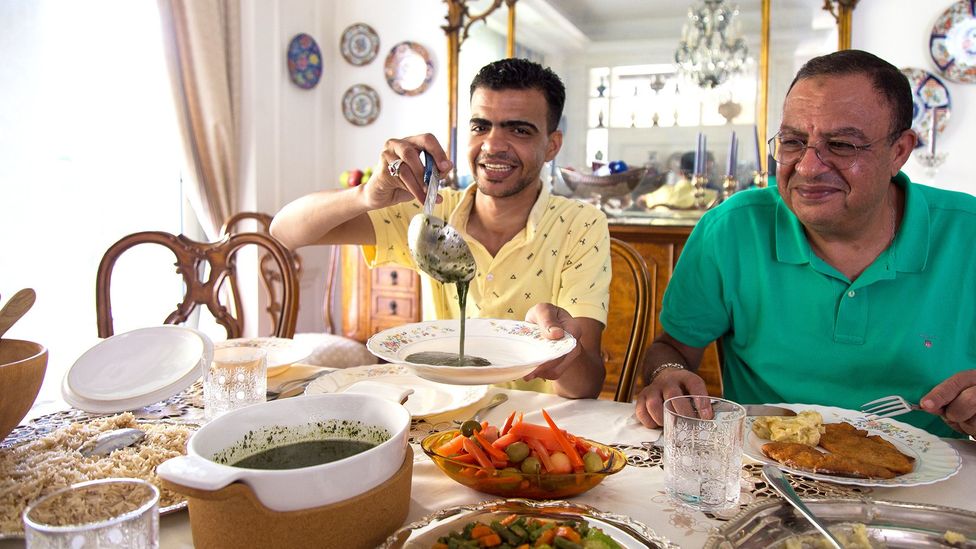 Back in the kitchen, I joined Tarek over a sublime-smelling stove. “If you hear the tsas (a sizzle), you’re doing it right,” he said, ladling the molokhia into a simmering pan of garlic, ground coriander and melted ghee. “I add in some tomato for tartness and sweetness.”

Much like molokhia’s regional variations, chefs have their own riffs on the recipe. Mohammed Fatih, a chef at Aswan’s Makka Restaurant (located on Abtal el Tahrir Street) revealed, “My secret is to cook a broth base made with bones from the inside of a cow’s tail and simmer it for three hours.” The freshly-minced molokhia is then slowly added to the broth. Meanwhile, Luxor-born head chef Hussein Mustafa (who works on Sanctuary Retreat’s trio of luxury Nile river yachts) asserts the importance of provenance. “The best molokhia is grown amongst sugar cane fields. That’s why molokhia is better in the south (of Egypt) than the north.”

If you hear the tsas (a sizzle), you’re doing it right

Fayoum, which lies 100km south-west of Cairo in Middle Egypt is a lush oasis, where desert dunes give way to swaying palms, natural sulphur springs and endless green fields. Pharaoh Amenemhat III (1818-1770 BCE) eyed up the area’s agricultural potential, and 3,500 years later, Fayoum’s glut of molokhia farmers continue to work its fertile land. Wall-to-wall sunshine and the well-drained soil are perfect conditions for molokhia, which grows here from May to August in as little as 60 days. 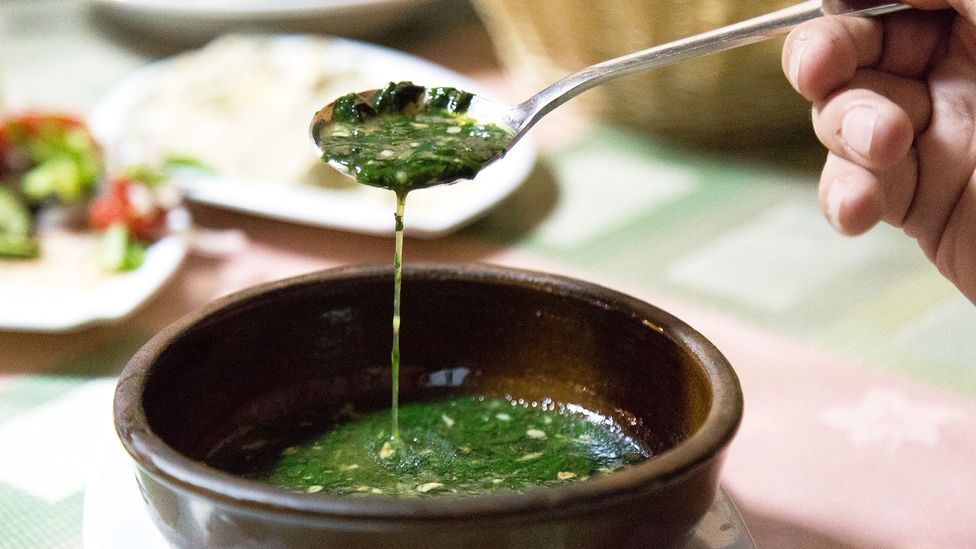 Molokhia was once considered the “food of kings” because of its curative powers (Credit: Sarah Freeman)

The two-metre-high, super-green is also cultivated on Cairo’s dusty, abandoned roof terraces. Malik Tag, head of smart farming at Schaduf, gave me a tour of the social enterprise’s rooftop headquarters (located in the upmarket neighbourhood of Maadi),where new urban garden concepts are being trialled. Molokhia was one of the first vegetables to be grown as part of Schaduf’s community-led hydroponic farming projects, he said. “The initiative(s) enabled low-income families to sell leafy greens (including molokhia) to the city’s high-end supermarkets.”

Eleven kilometres away in the outlying city of Giza, I met with 27-year-old receptionist Mimi Melad, a self-proclaimed stickler for tradition when it comes to molokhia. “I always cook with fresh (molokhia) from a stall on Al-Haram Street near my home,” she said. “And I do the shahe’t (pronounced “cha-h’a”) every time,” she continued, referring to an age-old cooking ritual still practised today by some Egyptian women. Believed to make the dish more flavoursome, the cook leaned over the steaming molokhia, mouthing the words “shahe’t el mulukhiyah”while making an audible gasp, before clamping the pan’s lid shut.