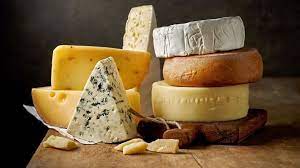 We’ve all scrutinised the white spots on Cheddar or little blooms of fur on bread, trying to decide whether to turn it into sandwiches or throw it in the bin. With an estimated 6.6 million tonnes of food thrown away by households in the UK every year, some needlessly, how can you know if food with a little mould is safe to eat?

What is food mould?

Food mould is microscopic fungi. They reproduce by releasing spores into the air, and when they fall on to food that’s starting to turn, they can grow.

Mould is made up of a hair-like branching structure called mycelium, which works its way through food rather like plant roots. When the spores break through the surface, the food can change colour and get a dusty appearance – but the mould will have been working through it for a day or two before you see any signs.

“Fungi are essential recyclers in our environment”, says mould expert Dr Patrick Hickey. “Ecosystems depend on fungi to break down organic matter, without them we would be wallowing in our own waste”.

Which foods can be contaminated by mould?

Any food can be contaminated by mould, but some has a more favourable environment for it to grow. Mould likes warm, moist or bacteria-rich conditions. Fruit, vegetables and salad leaves have a high water content, and bread has moisture and plenty of carbohydrates for mould to feed on.

Mould doesn’t like salt, sugar, acid, very dry or cold conditions, which is why a jar of strawberry jam or pickled onions will last a lot longer than fresh strawberries or onions. But it can still grow in more challenging conditions. “Mould is tough”, says Philippa Hudson, Senior Lecturer in Food Safety at Bournemouth University, pointing out it can contend with the acidic conditions of citrus fruits and the colder environment of the fridge.

Indeed, “everything can go mouldy with the right conditions”, says Philippa, “even rice, flour, dried lentils or beans will go mouldy if they get damp”.

Can you eat mouldy bread?

The Food Standards Agency (FSA) advises against salvaging mouldy bread, as porous food can be contaminated below the surface.

“As a general rule, a mould colony of 1cm in diameter on the surface has also penetrated 1cm deep into the food”, says Dr Hickey. He says bakers often add preservatives such as calcium to slow down the growth of mould.

If your loaf is turning stale but not mouldy, you can use it to make breadcrumbs or croutons. For more ideas for using up stale bread, watch our quick video below.

Dry cheeses such as Cheddar and Parmesan resist mould well, as they don’t provide the moist conditions it needs to spread. “If you find mould colonies on hard cheese that are smaller than 5mm, take at least 10mm off all sides before eating”, recommends Dr Hickey. But be sure to keep the knife out of the mould so it doesn’t contaminate other parts of the cheese.

It’s a different story for soft cheeses or any cheese that can be spread or crumbled. Unless the fungus has been deliberately introduced, as in blue cheese, throw these cheeses away if mouldy. The higher water content means microbes grow quickly, which can lead to salmonella and listeriosis if eaten.

Firm fruit and veg with little spots of mould can usually be salvaged – as long as they’re not slimy, as this signals the presence of bacteria that can cause food poisoning or stomach pain. Cutting around and below mould spots on firm veg such as root veg and cabbages should make them safe to eat. Their low moisture content and often higher acid levels makes it harder for the mould to penetrate.

Be wary of apples though. A toxin called patulin can be found in damaged or mouldy apples. If mouldy apples are used to make juice there can be high levels in the final produce, so never drink mouldy apple juice.

Soft fruit and veg, such as cucumbers, tomatoes and peaches, should be thrown away, as their high moisture content means they’re more likely to be contaminated below the surface.

Slightly wilted salad leaves will be okay to eat, but avoid any that have turned mouldy or slimy. Always throw away slimy fruit and vegetables.

Jam with mould on the surface

Occasional jam eaters will be all too familiar with opening a jar and finding a layer of mould on top. But is it safe to do as the former PM Theresa May reportedly does, and scrape it off to eat what’s underneath?

The FSA warns that “while it is possible that removing the mould and a significant amount of the surrounding product could remove any unseen toxins that are present, there is no guarantee that doing so would remove them all”. Dr Hickey suggests if your jam has a bit of green mould on the surface, it should be safe to eat if you scoop out the top layer and a few centimetres beneath and eat as soon as possible, but the mould will likely return after a few days.

The higher the sugar content of the jam, the less mould can grow. But if you’re unsure, or the jam has a thick layer of mould, it’s best to spoon it straight into the food waste bin. The same applies to jars of curry paste.

Mould isn’t all bad for us. Dr Hickey insists fungi plays a key role in improving the taste, texture and nutritional value of what we eat, and can make it easier to digest. “Without fungi, beer and pizza wouldn’t exist”, he points out.

Some of our favourite foods are made using carefully chosen mould variants, known to be safe for human consumption. The strain Penicillium Roqueforti gives blue cheeses such as Roquefort and Stilton their blue veins and strong flavour. Another strain, Botrytis cinerea, or ‘noble rot’, is used in winemaking to reduce the grapes’ water content and enhance their sweetness.

But that doesn’t mean we can eat anything that mould has grown on. Different strains of moulds have different impacts on the body, and if you have a mould allergy you have to be particularly careful.

Dr Hickey calls deciding to eat mouldy food a “fungi roulette”, urging us to consider that it “probably contains an unknown cocktail of moulds – some or all may be potentially toxic species”.

The Food Standards Agency (FSA) advises against eating any food containing mould, emphasising that this is especially important for vulnerable groups such as children, the elderly, pregnant women and people with a weakened immune system. Dr Hickey says some food can be salvaged, “but do so at your own risk”.

Our food production process has come a long way since the medieval ages, when mouldy grains gave villagers in southern France hallucinations, convulsions and burning limb pain dubbed ‘St Anthony’s Fire’, but we still need to be wary. Unlike bacteria, “moulds tend not to cause sudden food poisoning”, says Dr Hickey, but certain moulds produce toxins called mycotoxins. “If a considerable quantity of toxic mould is consumed it may cause gastro-intestinal symptoms and more serious effects, including liver or kidney failure and death”.

While it’s rare for humans to get acutely poisoned, Dr Hickey says there’s relatively little known about the long-term effects of ingesting small amounts of fungal toxins, warning “there’s concern that if consumed repeatedly, mycotoxins may cause cumulative effects and lead to illness”.

Can I stop my food going mouldy?

You can’t prevent your food going mouldy, but you can slow the process down. Mould likes warm, damp conditions with plenty to feed on. A clean, dry and well-ventilated kitchen can help keep mould at bay.

How you store your food can make all the difference. For instance, keeping salad leaves in airtight containers lined with paper towel in the fridge stops them from getting too moist, slowing down the decaying process.