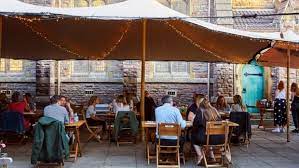 As 12 April nears, it may be time to have a refresher course on restaurants. It’s been a long old while. What, actually, is a restaurant, and how do I behave in one?

A restaurant is a place that isn’t your home where you can eat dinner. It’s someone else’s home, in a sense, because it’s run by a dysfunctional family who live there practically 24/7. Let’s call them “the staff”. Exactly as in your own home, the arguments are constant, everyone has a slightly cruel nickname and the flush handle in the toilet is broken once a month.

Due to a considerable amount of smoke and mirrors – officially known as hospitality – the customers rarely detect this. In fact, from the moment you sweep past the maître d’s desk into a restaurant in mid-service, everything about the rotten, outside world should feel perceptibly nicer. Have a seat, rest your feet, let a smiling face bring you a bowl of spaghetti alle vongole and a cold glass of picpoul. How about a slice of moist orange polenta cake and a small glass of moscato d’Asti? See? Isn’t the world more affable now? Haven’t these simple, kind, emotionally nourishing acts transformed your psyche? This is why restaurants are magical, and why the world has felt like a barren, dystopian landscape without them.

Yes, I’m being dramatic, but did I mention the washing-up? Did I say that, after the chef and servers have worked actual, tangible magic, all the ferrying of plates, machine-loading, washing and stacking is somebody else’s woe. These heroes – the kitchen porters – will still be scraping plates at 11pm, long after you’re back on your sofa, wearing track pants and with your hands cradled over your satisfyingly full belly. It’s around about now that the restaurant manager will realise that his mixologist has impregnated the pastry chef and done a runner with the cash float, and that a mysterious customer has blocked the bathroom sink with paper towels, which will require calling out a 24-hour plumber. It’s worth remembering this when you’re charged £21 plus service for the spaghetti vongole. There’s more going on behind the scenes than the pasta.

Now that we’ve covered what a restaurant is, we should also cover what it isn’t. A restaurant is not a creche, unless you are roped off at the back of a Hungry Horse fun pub, where some level of screaming, running around and soiling yourself is de rigueur. A restaurant is not a magical sticking plaster over your terrible relationship. None of us wants to eat downwind of you sulking and hissing about that time he “liked Tina’s Instagram bikini photos, and she knows what she’s up to. Well, you can have her!” A restaurant isn’t a TikTok backdrop so, please, no standing on the seats for an aerial shot of your onion rings.

A restaurant isn’t a back-up plan if your other plans fall through, either. Unreserved space is as scarce as hen’s teeth right now, and this summer all no-shows will be punished for eternity in the afterlife by Satan himself playing Show Me Love by Robin S on a very out-of-tune accordion. You have been warned.

A restaurant is not your own home: if you have booked a table for a 20-person birthday party, then no, you cannot bring your own cake. Or have the screaming abdabs on TripAdvisor if you’re charged a fee for doing so. The manager needs the cash to pay for an advert for a new mixologist. Do not tell the staff you could cook this cheaper and better at home. You probably cannot, and anyway, life is far too short to make your own fondant potatoes. No one over the age of 45 throws dinner parties, because by that stage of life, you should have realised that this involves a full day of shopping, prepping and cooking, followed by a tiny bit of eating, then four hours of your guests droning on about buy-to-let mortgages.

There’s none of that nonsense at a wonderful, magical, heavenly restaurant. You eat, you pay, you leave in a taxi, envisaging a glorious time, mere moments away, when you can loosen your bra and get horizontal. So, to sum up: show up on time, be nice, tip your server. Restaurants are open for business, and by gosh we’ve missed them. We won’t take them for granted again.