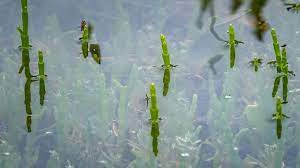 It was July in north Norfolk and the coast road was busy with holiday traffic. Visitors were thronging the narrow, flint-cottage streets of villages like Cley-next-the-Sea and Blakeney, streets that would become even busier once the summer school holiday got into full swing in August. Most visitors travel here to enjoy the relaxed seaside atmosphere of Norfolk’s former fishing ports; some come for the beaches, like the enormously wide arc of sparkling sand at Holkham Bay near Wells-next-the-Sea. Others are drawn by the seafood, which here on the coast is usually so fresh that it is still redolent of the North Sea that bore it.

Cromer crabs are one popular local delicacy here, as are Brancaster mussels and cockles from Stiffkey, known locally as “Stewkey blues”. What is less familiar to most visitors is a locally abundant wild plant that provides the perfect accompaniment to seafood. Samphire – or, as locals call it, “sam-fer” – is not the same plant that Shakespeare writes about in King Lear (“Half-way down, hangs one that gathers samphire; dreadful trade!”), which is rock samphire found only on precarious cliff faces, but marsh samphire, Salicornia europaea, a species that, as its name suggests, grows in coastal marshes.

Although it shares the same iodine-rich briny quality, marsh samphire is not a type of seaweed but a cacti-like, salt-tolerant plant that thrives in mud that is covered by the incoming tide twice a day. Marsh samphire can be found all around the British coast in suitable habitats, but many consider the most succulent is that which grows in the vast tidal mudflats of the north Norfolk coast.

Picked between June and August before it becomes woody, part of this locally abundant plant’s charm comes from its habit of growing in inaccessible places. It is a plant of the edge, of saltmarsh and creeks: that nebulous tidal zone where it is never quite clear where the land ends and the sea begins. At its most palatable early in the season, the timing of its picking is crucial, not only of time of year but also of the sea itself, as the gathering of samphire necessitates a venture out into muddy creeks at low tide. For those who pick the plant, a good knowledge of local geography and sometimes treacherous tides is essential, as are Wellington boots and a tolerance of mud. 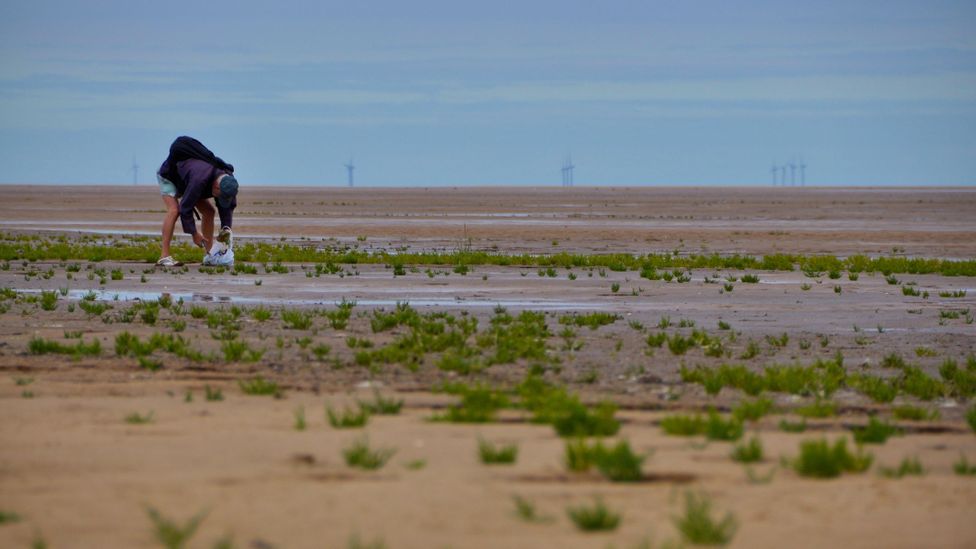 Samphire can be found around Britain, but the best is considered to grow in Norfolk’s vast tidal mudflats (Credit: Deveritt/Getty Images)

Samphire takes its name from a corruption of Saint Pierre (St Peter), the patron saint of fishermen. Another name for it is glasswort, which derives from its past use in glass manufacturing, when an English revival of the craft was inspired by the arrival of immigrants from Venice, Italy, and Lorraine, France in the 16th Century. They burned the plant to produce a soda-rich ash that was used as a flux to lower the melting point of the silica in the glass-making process.

Not only delicious but long recognised as having health benefits too, the 17th-Century herbalist Nicholas Culpeper praised the plant for its medicinal properties: “all sorts of saltwort, or glasswort… are of a cleansing quality, without any great or manifest heat”. Rich in vitamins A, B and C, pickled samphire was once considered to be a reliable means of preventing scurvy in sailors.

Sometimes referred to as “poor man’s asparagus”, samphire, which although decidedly more salty, certainly has some of the qualities of that vegetable. Like asparagus, it is also an edible form of grass, although samphire has a singular briny quality all its own. Its popularity as a vegetable has increased in recent years thanks to recognition by celebrity cooks like Hugh Fearnley-Whittingstall and Rick Stein, and samphire now appears regularly on the menus of many top London restaurants, which often obtain it from sources as far afield as Israel and Mexico that can provide a reliable, if expensive, year-round supply.

Sometimes referred to as “poor man’s asparagus”, samphire, which although decidedly more salty, certainly has some of the qualities of that vegetable

In season, though, locally sourced Norfolk samphire is undoubtedly a cheaper, fresher and more environmentally friendly option. It has long been a popular seasonal treat here on the coast: many older people can remember “The Samphire Man”, who used to drive a horse and cart through the streets of King’s Lynn town, shouting out “samphire, samphire, long and green” as he sold it by the pint glass wrapped in newspaper. For Norfolk locals, “samfer” has never been a luxury food, but simply part of everyday life – a short-lived summer treat like cherries or strawberries that is as much a part of the local culture as crabs and cockles.

As well as being good to eat, samphire also has an important role to play in coastal ecology. In addition to providing valuable habitat for plants and birdlife, the tidal marshes on which it grows are important for protecting this fragile coastline from the storms and rising sea levels that cause serious erosion. According to plant expert Paul Simons in The Guardian, it has been demonstrated that saltmarshes absorb the power of waves far more effectively than manmade structures like sea walls. Marsh samphire is crucial in the formation of saltmarshes as its roots bind the mud to create a foothold for other salt-tolerant plants like sea aster and sea blite to grow. 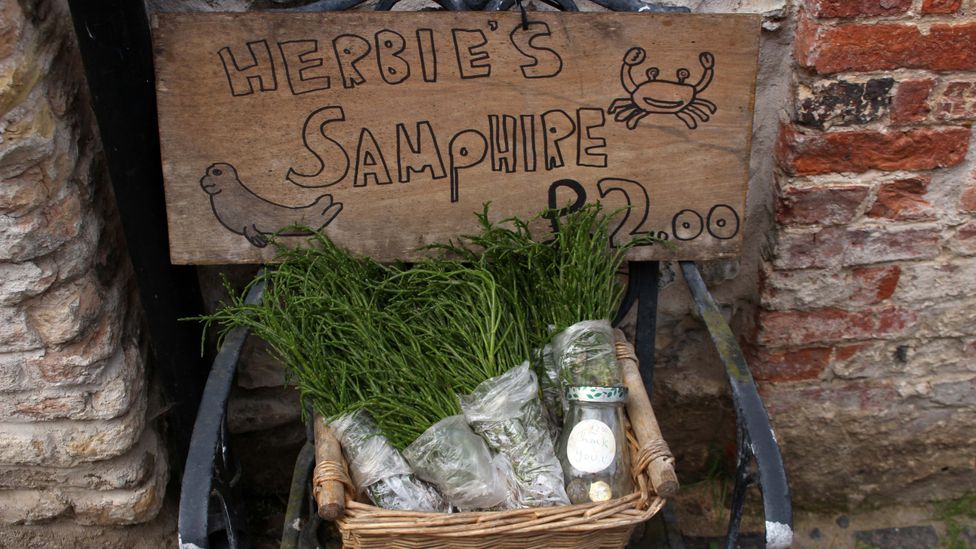 At its best between June and August, samphire is a beloved seasonal delicacy around the Norfolk coast (Credit: Laurence Mitchell)

Thanks to their ability to trap organic detritus, saltmarshes are also important for capturing and storing carbon – more effective, in fact, than forests of equivalent size. Because of this, it is vital that such a valuable natural habitat is not over-exploited, and that samphire is only gathered for personal consumption. “With permission, landowners are generally quite relaxed about people picking for personal consumption,” said Dr Adele Powell, partnership coordinator for The Wash and North Norfolk Marine Partnership, “but less so when it’s done on a commercial scale, which is technically illegal.”

Driving along the Norfolk coast in search of this seasonal delicacy, I found foraged samphire on sale outside a couple of cottages at Blakeney, as well as from a bicycle at the quay that had a box of it for sale for £2 a bunch. Further on at the village of Morston, I saw it advertised for sale outside a house in the road that leads down to the quay. This is the real thing: locally sourced, emerald green and fresh from the marsh; no air-miles or supermarket vacuum packing involved in the process.

You may also be interested in:
• The return of Britain’s meat-eating plants
• The strange story of Britain’s oldest sweet
• The English vegetable picked by candlelight

The best way to cook samphire is a matter of debate. It can be eaten raw, especially when young, but gentle cooking removes some of the pronounced saltiness. High-end restaurants tend to cook their imported samphire for a very short time, keeping most of the crunch and maritime purity of the plant. Galton Blackiston, owner and chef patron of North Norfolk’s Michelin-starred Morston Hall country house hotel and restaurant, makes use of the plant as a crunchy ingredient in his bacon, broad bean, samphire and new potato salad; while Dominic Chapman, once a head chef at Heston Blumenthal’s three Michelin-starred Fat Duck, adds lightly blanched samphire as a garnish to his elaborate crab ravioli.

In Norfolk, where its freshness and relative abundance allows it to be treated a little more prosaically, it is cooked – either lightly boiled or steamed – for about five minutes, perhaps with a dash of vinegar in the cooking water. Butter is usually added at the last minute to coat the stems, and some might whip up a hollandaise sauce for dipping. It goes without saying that no additional salt needs to be added and any extraneous saltmarsh mud needs to be carefully removed beforehand.

Although samphire can be enjoyed as an accompaniment to variety of dishes – seafood and lamb in particular – or incorporated into risotto or pasta dishes, it is perhaps best eaten as a simple dish on its own or with a soft-poached egg. The real pleasure is to eat it with your fingers, pulling each stem through the teeth, removing the nodules of delicate green flesh like beads on a necklace. With the salty tang of the sea and just a hint of seaweed-like iodine, such a delectable experience can only be described as having the essence of the Norfolk coast on a plate.