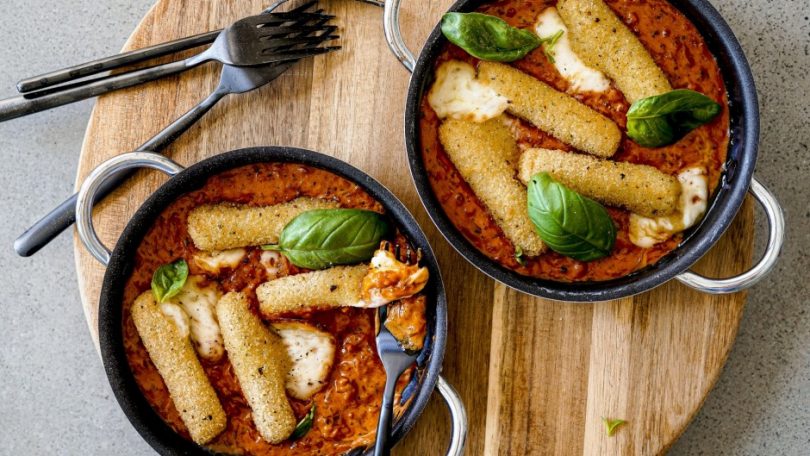 When motivation is low and the need for speed is high, often the freezer aisle is our dinnertime holy grail. From fish fillets to beer-battered chips, frozen foods can provide a very necessary shortcut during the weekly grind. Here they have been elevated with the odd extra ingredient and some saucy goodness to make your next frozen dinner sing.

Confession: until this feature was thrown my way, I have never eaten a mozzarella stick. I was curious, enthralled and appalled. Not because I am appalled by the freezer aisle, far from it, more that I really love to cook, so prefer the manual labour. But I was also pleasantly surprised. These are an excellent shortcut.

The bite of vodka sauce, as well as being a seriously luxurious dipping agent, is a great contrast to the crisp crunch of the crumb and a beautiful marriage of creamy sauce and creamy, oozing mozzarella.

Serves 4 as a snack The key to a good fish sanga is hands down the crispy fish contrasting with the soft white bread. This is not the time for artful sourdoughs. It’s the soft, crusts-trimmed variety that makes the fish sanga shine. A trip to the supermarket freezer aisle uncovered some pretty darn good at-home fish options. I’ve attempted to levitate them to pub level by adding harissa mayo, crisps and minty peas. The best bit is mixing up the fillings, adding different elements so people can help themselves – it’s the club sandwich of the COVID age.

This recipe is very loosely based on the traditional Vietnamese noodle bowl, bun thit nuong cha gio, a vermicelli bowl with all manner of veg, spring rolls and nuoc cham. I went for a creamier lemongrass and hoisin dressing and also a hit of chilli oil, and I think you are going to love it. It’s quick to prepare and if you go heavy on the vegetable quotient, mostly healthy. The key is getting that balance of sweet and sour, crunchy and chewy. I tried to buy cheese curds in an attempt to recreate the authentic poutine dream. Not easy. They do exist, so if you like the chase and have the time without the (immediate) need, seek them out. In the interests of supermarket ease, here the curds have been replaced with mozzarella, and there is stretch and there is squeak. I only used half a barbecue chook, it’s an added surprise rather than the main event (use the remainder in these recipes). I also added a few dried porcini mushrooms to the gravy to “beef” up the flavour in record time. Omit them if you don’t have any, it’s a bonus rather than a must have.