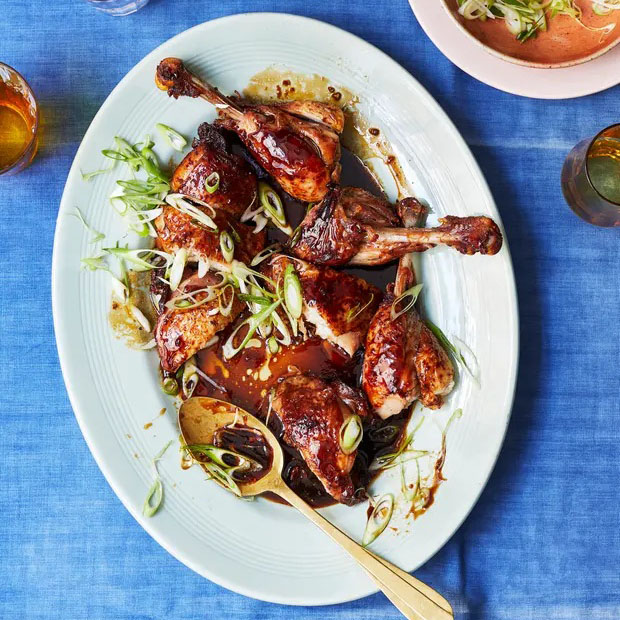 The Caribbean is a cultural microcosm, and home to a beautifully nuanced world of ingredients and dishes. The multitude of subcultures reflected across the islands owes a great deal to historical contributions from the indigenous Amerinidians, Africans, British, French, Portuguese, Spanish, Irish, Indian and Chinese, and to celebrate my heritage, I try to explore as much of Caribbean food culture as possible, sharing the region’s recipes to give a snapshot of its story and cooking practices.

This is a super-rich, salty and fried chicken dish that’s often found at local Chinese takeaways in Guyana.

First make a brine by putting the soy sauce, vinegar, five-spice, ginger and sugar in a bowl, then whisk to dissolve the sugar.

Put the chicken legs in a ziplock bag, pour in the brine, seal the bag and massage to make sure the chicken is well coated. Put in the fridge to marinate for at least a couple of hours, and ideally overnight.Advertisement

Once marinated, remove the chicken legs from the liquid, pat them dry with kitchen towel and lay out on an oven tray. Reserve the marinade for later.

Put the vegetable oil in a pan and heat it up slowly to 170-180C. Once the oil’s at temperature, lay in the chicken skin side up, and keep the thermometer in the pan to monitor the temperature (it may drop a little once the chicken is dropped in, in which case turn up the heat slightly, then reduce it again once the oil comes back up to temperature). Fry the chicken for five to seven minutes, then turn and repeat on the other side. Once cooked, transfer to a rack or large plate lined with kitchen paper, to drain.

Using a large, sharp knife, separate the drumsticks from the thighs, cut the latter in half through the bone, so you have three pieces from each leg, then arrange on a platter.

In a small pan, mix the sesame oil with half the reserved marinade (discard the rest, or use as the base for a sweet, sharp sauce), bring to a boil and cook and reduce for a minute. Drizzle the thickened sauce all over the chicken, garnish with the spring onions and serve with fried rice.

Cassareep, an indigenous ingredient made from cassava root, gives the rice a slightly sour undertone. You can buy it in any good Caribbean food store and online; if you can’t get hold of any and want to replicate the effect, mix a tablespoon each of soy and Worcestershire sauce into 80ml molasses.

Put the rice in a sieve, wash under cold running water to remove any excess starch, then put to one side.

Put 500ml water and a teaspoon of salt in a large pan, bring to a boil, then add the washed rice; if need be, add a little more water so it comes up just above the rice. Once the rice has cooked for 20 minutes, drain, then spread out on a large tray, leave to cool, cover and put in the fridge, ideally overnight – cold, stale rice always works best for fried rice, so the longer, the better.

Put the vegetable oil in a large pan on medium heat and, once hot, add the chopped onion, green beans, carrots, cabbage, garlic, ginger and chilli, and saute gently for a few minutes, to soften. Add the cooled cooked rice, stir until well combined, then add the sesame oil, oyster sauce, soy sauce, cassareep and five spice, making sure they’re evenly distributed throughout the rice mix, and cook for a few minutes more.

Once the vegetables are cooked but still have a little crunch, transfer the rice to a large bowl, scatter over the spring onions and serve.

This is the national dish of St Kitts and Nevis, two sister islands that lie to the north-east of Antigua. The main ingredient, saltfish, was imported from the North Atlantic as early as the 15th century in exchange for sugar during the transatlantic slave trade, and it eventually made its way into the local cuisine. This is one of my favourite ways to eat saltfish, with the coconut milk making it deliciously rich and comforting.

First, start on the dumplings. Put the flour, half the salt and the baking powder in a bowl and mix. Add the butter or coconut oil, and stir to combine. Add the shredded coconut, mix again to ensure it is evenly distributed, then whisk in the coconut milk bit by bit, until the dough starts to come together.

Transfer the dough to a work surface and, using both hands, lightly knead it until it comes together into a ball, then wrap and leave to rest at room temperature for 30 minutes.Advertisement

Meanwhile, get on with the stew saltfish and breadfruit. Heat the oven to 190C (170C fan)/375F/gas 5. Put the breadfruit on an oven tray, then drizzle with oil, scatter over the salt and toss to coat. Arrange the breadfruit slices on the tray in a single layer, then roast for 30 minutes, or until slightly golden. Keep warm.

While the breadfruit is roasting, put the saltfish in a medium pan, cover with cold water and bring to a boil. Turn down to a simmer, cook for 15 minutes, then drain and set aside.

Heat the oil in a frying pan, then saute the onion, garlic, peppers and scotch bonnet for a few minutes, until they start to soften.

Add the diced tomatoes, ground black pepper and saltfish, toss to coat, then pour in the coconut milk and fold it in gently, so the fish doesn’t break up.Turn up the heat slightly, so the coconut milk starts to bubble, then reduce to a simmer, cover and leave to cook for five minutes.

While the saltfish is bubbling away, cook the dumplings. Put a large pan of water on the stove with the remaining teaspoon each of salt and butter, and bring to a boil. Divide the dough into eight pieces and roll into balls. Just before adding them to the boiling water, flatten them slightly, so they look a bit like burger patties. Drop the dumplings one by one gently into the boiling water, cover, turn down the heat to medium and cook for about 15 minutes, until they float to the surface and feel dense to the touch. Lift out with a slotted spoon.

To serve, place a generous spoonful of the stew saltfish in each of four bowls and scatter over some chopped coriander and spring onion. Place two dumplings and a couple of slices of the roast breadfruit on the side, and serve with hot pepper sauce if you want a little extra heat.