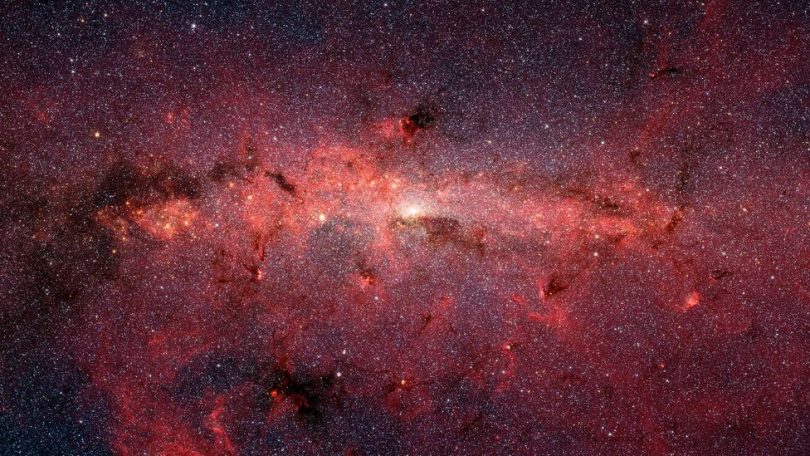 The cosmos has been expanding since the Big Bang, but how fast? The answer could reveal whether everything we thought we knew about physics is wrong.

Let’s start by saying the Universe is big. When we look in any direction, the furthest visible regions of the Universe are estimated to be around 46 billion light years away. That’s a diameter of 540 sextillion (or 54 followed by 22 zeros) miles. But this is really just our best guess – nobody knows exactly how big the Universe really is.

That is because we can only see as far as light (or more accurately the microwave radiation thrown out from the Big Bang) has travelled since the Universe began. Since the Universe burst into existence an estimated 13.8 billion years ago, it has been expanding outwards ever since. But because we don’t know a precise age for the Universe either, it makes it tricky to pin down how far it extends beyond the limits of what we can see.

One property that astronomers have tried to use to help them do this, however, is a number known as the Hubble Constant.

“It’s a measure of how fast the universe is expanding at the current time,” says Wendy Freedman, an astrophysicist at the University of Chicago who has spent her career measuring it. “The Hubble Constant sets the scale of the Universe, both its size and its age.”

It helps to think about the Universe like a balloon being blown up. As the stars and galaxies, like dots on a balloon’s surface, move apart from each other more quickly, the greater the distance is between them. From our perspective, what this means is the further away a galaxy is from us, the faster it is receding.

Unfortunately, the more astronomers measure this number, the more it seems to defy predictions built on our understanding of the Universe. One method of measuring it directly gives us a certain value while another measurement, which relies on our understanding of other parameters about the Universe, says something different. Either the measurements are wrong, or there is something flawed about the way we think our Universe works.

But scientists now believe they are close to an answer, largely thanks to new experiments and observations aimed at finding out exactly what the Hubble Constant really is.

“What faces us as cosmologists is an engineering challenge: how do we measure this quantity as precisely and accurately as possible?” says Rachael Beaton, an astronomer working at Princeton University. To meet this challenge, she says, requires not only acquiring the data to measure it, but cross-checking the measurements in as many ways as possible. “From my perspective as a scientist, this feels more like putting together a puzzle than being inside of an Agatha Christie style mystery.”

The first ever measurement of the Hubble Constant in 1929 by the astronomer whose name it carries – Edwin Hubble – put it at 500km per second per megaparsec (km/s/Mpc), or 310 miles/s/Mpc. This value means that for every megaparsec (a unit of distance equivalent to 3.26 million light years) further away from Earth you look, the galaxies you see are hurtling away from us 500km/s (310 miles/s) faster than those a megaparsec closer.

Over a century since Hubble’s first estimate for the rate of cosmic expansion, that number has been revised downwards time and time again. Today’s estimates put it at somewhere between 67 and 74km/s/Mpc (42-46 miles/s/Mpc).

Part of the problem is that the Hubble Constant can be different depending on how you measure it.

Most descriptions of the Hubble Constant discrepancy say there are two ways of measuring its value – one looks at how fast nearby galaxies are moving away from us while the second uses the cosmic microwave background (CMB), the first light that escaped after the Big Bang.

We can still see this light today, but because of the distant parts of the universe zooming away from us the light has been stretched into radio waves. These radio signals, first discovered by accident in the 1960s, give us the earliest possible insight into what the Universe looked like.

Two competing forces – the pull of gravity and the outwards push of radiation – played a cosmic tug of war with the universe in its infancy, which created disturbances that can still be seen within the cosmic microwave background as tiny differences in temperature.

Using these disturbances, it is then possible to measure how fast the Universe was expanding shortly after the Big Bang and this can then be applied to the Standard Model of Cosmology to infer the expansion rate today. This Standard Model is one of the best explanations we have for how the Universe began, what it is made of and what we see around us today.

But there is a problem. When astronomers try to measure the Hubble Constant by looking at how nearby galaxies are moving away from us, they get a different figure.

“If the [standard] model is correct, then you would imagine that the two values – what you measure today locally and the value that you infer from the early observations would agree,” says Freedman. “And they don’t.”

When the European Space Agency (ESA)’s Planck satellite measured discrepancies in the CMB, first in 2014 then again in 2018, the value that comes out for the Hubble constant is 67.4km (41.9 miles)/s/Mpc. But this is around 9% less than the value astronomers like Freedman have measured when looking at nearby galaxies.

Further measurements of the CMB in 2020 using the Atacama Cosmology Telescope correlated with the data from Planck. “This helps to rule out that there was a systematic problem with Planck from a couple of sources” says Beaton. If the CMB measurements were correct – it left one of two possibilities: either the techniques using light from nearby galaxies were off, or the Standard Model of Cosmology needs to be changed.

The technique used by Freedman and her colleagues takes advantage of a specific type of star called a Cepheid variable. Discovered around 100 years ago by an astronomer called Henrietta Leavitt, these stars change their brightness, pulsing fainter and brighter over days or weeks. Leavitt discovered the brighter the star is, the longer it takes to brighten, then dim and then brighten again. Now, astronomers can tell exactly how bright a star really is by studying these pulses in brightness. By measuring how bright it appears to us on Earth, and knowing light dims as a function of distance, it provides a precise way of measuring the distance to stars. (Read more about how Henrietta Leavitt changed our view of the Universe.)

If the Universe is really expanding faster than we thought, it might be much younger than the currently accepted 13.8 billion years

Freedman and her team were the first to use Cepheid variables in neighbouring galaxies to our own to measure the Hubble constant using data from the Hubble Space Telescope. In 2001, they measured it at 72km (45 miles)/s/Mpc.

Since then, the value from studying local galaxies has hovered around the same point. Using the same type of stars, another team used the Hubble Space Telescope in 2019 to arrive at a figure of 74km (46 miles)/s/Mpc. Then just a few months later, another group of astrophysicists used a different technique involving the light coming from quasars to get a value of 73km (45 miles)/s/Mpc.

If these measurements are correct, then it suggests that the Universe might be inflating faster than theories under the Standard Model of Cosmology allow. It could mean this model – and with it our best attempt at describing the fundamental nature of the Universe – needs to be updated. At present, the answer is not certain, but if it proves to be the case, then the implications could be profound.

“It could be telling us something is missing from what we think is our standard model,” says Freedman. “We don’t yet know the reason why this is happening, but it’s an opportunity for a discovery.”

If the Standard Model is wrong, one thing it could mean is our models of what the Universe is made up of, the relative amounts of baryonic or “normal” matter, dark matter, dark energy and radiation, are not quite right. And if the Universe is really expanding faster than we thought, it might be much younger than the currently accepted 13.8 billion years.

An alternative explanation for the discrepancy is the part of the Universe we live in is somehow different or special compared to the rest of the Universe, and that difference is distorting the measurements. “It is far from a perfect analogy, but you can think about how the speed or acceleration of your car is modified if you go up or down a hill even if you are applying the same pressure to the gas pedal,” says Beaton. “I think it is unlikely to be the ultimate cause of the discrepancy in the Hubble constant that we see, but I also think that it is important to not disregard the work put into those results.”

But astronomers think they are getting close to pinpointing what the Hubble Constant is and which of the measurements is correct.

“What’s exciting is I think we really will resolve this in fairly short order, whether it’s a year or two or three,” says Freedman. “There are so many things that are coming on the horizon that will improve the accuracy with which we can make these measurements that I think we will get to the bottom of this.”

One is the ESA’s space observatory Gaia, which launched in 2013 and has been measuring the positions of around one billion stars to a high degree of accuracy. Scientists are using this to work out the distances to the stars with a technique called parallax. As Gaia orbits the sun its vantage point in space changes, much like if you close one eye and look at an object, then look with the other eye it appears in a slightly different place. So, by studying objects at different times of the year during its orbit, Gaia will enable scientists to accurately work how fast stars are moving away from our own Solar System.

Another facility that will help answer the question of what the Hubble Constant’s value is the James Webb Space Telescope, which is due to be launched late in 2021. By studying infrared wavelengths, it will allow better measurements that won’t be obscured by the dust between us and the stars.

If they find that the difference in the Hubble Constant does persist, however, then it will be time for new physics. And although many theories have been offered up to explain the difference, nothing quite fits what we see around us. Each potential theory has a downside. For example, it might be there was another kind of radiation in the early universe, but we have measured the CMB so accurately this does not seem likely. Another option is that dark energy could be changing with time.

“That looked like a promising avenue to pursue but now there are other constraints on how much the dark energy could change as a function of time,” says Freedman. “You’d have to do it in a really contrived way and that doesn’t look very promising.” An alternative is that there was dark energy present in the early universe that just disappeared, but there is no obvious reason why it would do this.

It has forced scientists to dream up new ideas that could explain what is going on. “People are working really hard at it and it’s exciting,” adds Freedman. “Just because no one’s realised what [the explanation] is yet doesn’t mean that there won’t be a good idea that will emerge.”

Depending on what these new telescopes reveal, Beaton and Freedman could well find themselves in the midst of a mystery worthy of an Agatha Christie novel after all.