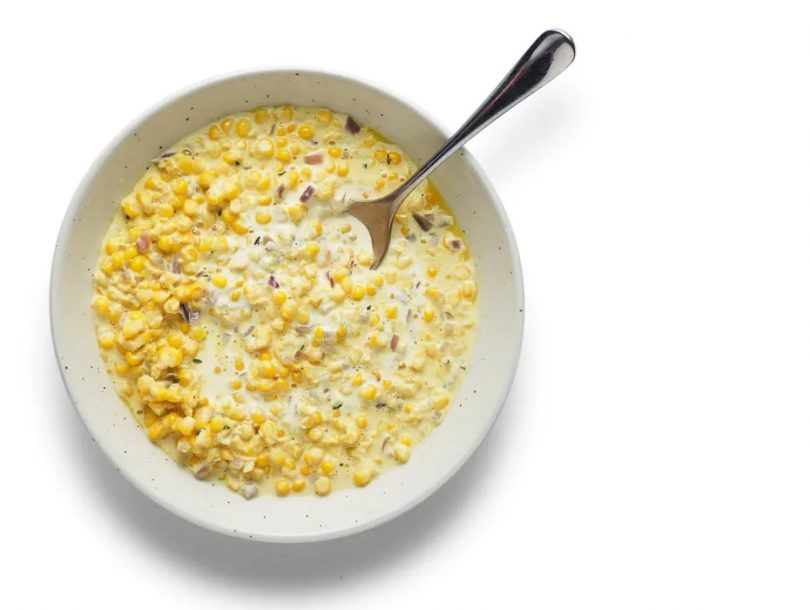 Corn in this country has two distinct seasons: tuna-and-sweetcorn sandwich season, which runs from October to July, and the current barbecued corn on the cob season, in which we choose to floss our gums on something that is somehow simultaneously hotter than the sun and almost completely raw. Our lack of expertise is perhaps understandable, since the maize family is native to the Americas, and gained popularity as human food in this country only relatively recently.

Not for us the myriad celebratory festivals that pepper the American Midwest in summer, many of which culminate in the crowning of a sweetcorn queen – though I must draw your attention to the Isle of Wight’s Sweetcorn Fayre at the end of September, which promises visitors a giant sweetcorn fritter – nor the many different ways to enjoy it, from chowder to succotash. Perhaps my favourite, however, is this particularly Southern take, available year round in a tin but, in my opinion, only really worth eating fresh.

Unlike in the Americas, you’re unlikely to get a choice of corn varieties in the UK, but do choose whatever looks freshest, because, once picked, sweetcorn’s sugars quickly convert to starches. Ideally, buy it still in the husk, or green, as Scott Peacock describes it in The Gift of Southern Cooking, the book he co-authored with the great Edna Lewis, noting that: “Southerners eat corn in so many different ways that we need all these names, the same way Eskimos have a multitude of words for ‘snow’.” The leaves help to keep it fresh; they should be green, rather than dry or browning, and the silken threads at the top still pale and slightly sticky. Look at the base, where it’s been cut; the more discoloured it is, the longer ago it was harvested.

The easiest way to make creamed corn is to strip the kernels from their cob and cook them in a creamy sauce, but that way you miss out on much of the flavour that can be pressed out of the cob itself. Martha Rose Shulman grates her corn, rather than cuts it off, thus ensuring that as much is extracted from the cob as possible, but this gives what one commenter on the New York Times food site describes as more like “fresh corn polenta” than creamed corn. Very flavourful, but texturally a little unsatisfying.Advertisement

The late lamented (by me, at least) Gourmet magazine suggests running a knife down the cobs to milk them of any remaining juices, while Cook’s Illustrated opts for the best of both worlds, stripping and scraping half the cobs and grating the rest, which has the benefit of “releasing corn’s natural thickener”, as well as giving the dish some of the intense flavour of Shulman’s version. It also negates the need to puree some of the cooked corn, as in Gourmet’s recipe, corn being fibrous enough to render this process a bit of a pain.

Lewis and Peacock’s take is blessedly simple, relying on corn alone for flavour, and would work very well as a side dish with strong flavours such as devilled ham or mustard greens. If you’re serving your creamed corn with plain grilled meat or seafood, however, or as the star of the show, then you might like to accentuate corn’s natural sweetness with sauteed red onion or shallot, as Shulman and Cook’s Illustrated do, though I don’t think it needs the latter’s garlic, too. The fresh flavour of herbs – Gourmet suggests chives, Shuman sage or tarragon, and Jane Baxter and Cook’s Illustrated thyme, which is my own favourite – is never unwelcome, while if you fancy a bit of spice, you may also wish to add Baxter’s red chilli, always a friend to corn, or Cook’s Illustrated cayenne pepper.

Jane Baxter’s creamed corn is cooked in wine or stock and water.

For Shulman, whose recipe is intriguingly titled creamed corn without cream, sauteeing the corn in butter is quite enough, but without additional dairy to dilute the flavour, the results are shockingly, deliciously sweet, rather than soothingly creamy. Baxter, whose version in the Everyday & Sunday volume from Riverford Farm is inspired by Sydney’s Sean Moran, eschews cream, too, preferring to cook her corn in wine and stock or water for a more sophisticated result – this would be a great pairing with grilled fish or seafood. Her recipe also has the distinct benefit, unlike some others, of containing enough liquid to cook the corn, so though I’m going to stick with Southern tradition and finish the dish with cream, like Baxter, I’ll be starting off with water.

Because of the starches released by the grated corn (and, let’s be honest, with the best will in the world, unless you grow your own or live near a farm that does, corn bought in this country may often already be quite starchy), there’s no need to thicken the sauce with flour, as in Lewis and Peacock or Gourmet’s versions of the dish, especially if, like Gourmet and Cook’s Illustrated, you use double or whipping cream, rather than “half and half”, which, at 12% fat, is somewhere between our whole milk (at least 3.5%) and single cream (18%). You don’t need much of it if you’re not using it to cook the corn, but you will reap the benefits with a dish so sweet and luxuriously rich that you could almost bathe in it, though I promise you it’s better eaten.

Cut the cobs in half crossways with a heavy knife, then, standing each on its flat end, cut the kernels from half the corn halves into a bowl. Still holding the shaved cobs over the bowl, scrape the back of a knife down their length, to extract as much liquid as you can.

Coarsely grate the corn from the remaining corn halves into the same bowl, again making sure you extract as much liquid as possible from the cobs.

Finely chop the shallot or onion, if using, and strip the thyme leaves from their stalks.

Melt the butter in a wide pan over a medium-low heat, then add the shallot and thyme, if using, and cook until just softened, but not coloured.

Add all the corn, stir to coat with the butter, then cook, stirring regularly, for about five minutes.

Stir 200ml water into the pan, and bring up to a simmer. Turn the heat right down and cook, stirring occasionally, until the whole corn kernels are just tender and the liquid is thick.

Stir in the cream (how much you use is up to you), then season to taste and serve hot.