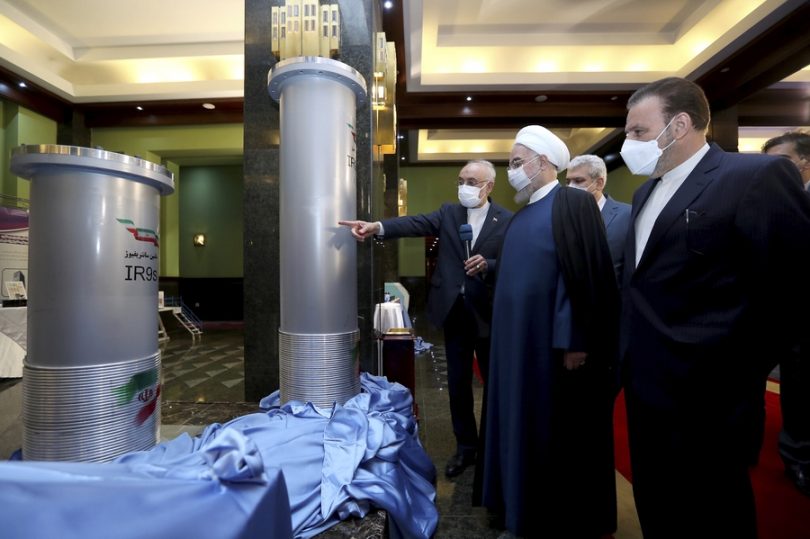 TEHRAN (Agencies):Iran announced on Saturday that it has started up advanced IR-6 and IR-5 centrifuges that enrich uranium more quickly, in a new breach of its undertakings under the troubled 2015 nuclear agreement.

It also said it has begun mechanical tests on an even faster nuclear centrifuge: The output of Iran’s IR-9 centrifuge, when operational, would be 50 times quicker than the first Iranian centrifuge, the IR-1. Iran’s nuclear program is also developing IR-8 centrifuges.

The broadcast aired no images of the cascades but broadcast a link with engineers at the plant who said they had introduced uranium hexafluoride gas to the cascades after receiving the order from Rouhani.

The IR-5 and IR-6 centrifuges allow uranium to be enriched more quickly and in greater amounts than Iran’s first-generation devices, which are the only ones that the 2015 deal allows it to use.

Rouhani reiterated during the ceremony that Tehr-an’s nuclear program is so-lely for “peaceful and civilian” purposes. “If the West looks at the morals and be-liefs that exist in our country, they will find that they should not be worried and sensitive about our nuclear technology, but because they themselves have used this technology [inappropriately], they think that we will do the same,” Rouhani said, according to Iran’s Mehr news agency.

Also Friday, the International Atomic Energy Agency (IAEA) said in a report released Friday that Iran had again violated limits on its stockpile of enriched uranium, according to Reuters.

The IAEA report does not explicitly say that Iran violated the deal’s terms, but the agency releases such reports when a breach occurs. Diplomatic sources told Reuters that the report indicated that a breach of the deal had occurred.