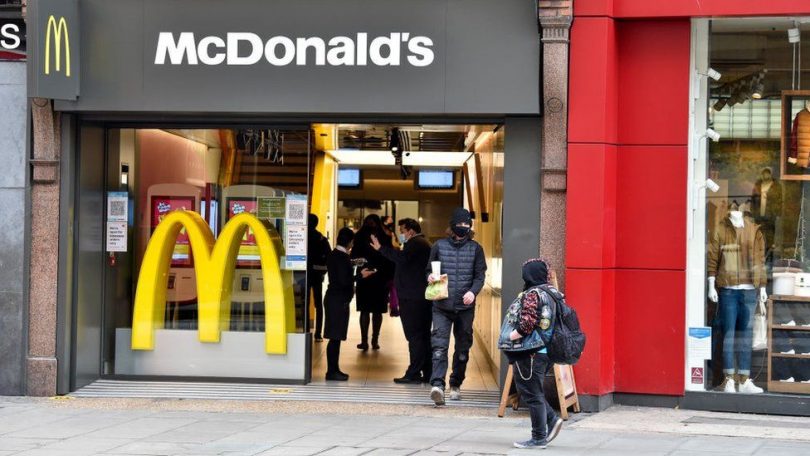 McDonald’s has run out of milkshakes and some bottled drinks at restaurants in England, Scotland and Wales.

The fast-food chain said it was facing supply chain issues affecting the availability of shakes and bottled drinks at its 1,250 outlets.

An updated statement said it was “working hard” to limit the impact on deliveries and customers and had taken some items off its menus for now.

It confirmed the lorry driver shortage was one reason behind the disruption.

Its statement said: “As reported, a number of issues are impacting retailers in the UK at the moment, one of which is the nationwide shortage of HGV drivers.”

A wide range of businesses have reported problems with supplies because of the driver shortage.

Last week, Nando’s closed some outlets after running out of chicken.

Earlier this month, a survey by the Road Haulage Association (RHA) estimated there was a shortage of more than 100,000 drivers in the UK, out of a pre-pandemic total of about 600,000.

The RHA has said some 30,000 HGV driving tests did not take place last year because of the coronavirus pandemic, adding that a “historic” shortage in drivers had been exacerbated by changes to rules following Brexit.

More recently, drivers being told to self-isolate after being notified by the NHS Covid app have also added to the problem.

Analysis of the latest ONS Labour Force Survey for the second quarter suggests that 14,000 EU lorry drivers left jobs in the UK in the year to June 2020, but only 600 had returned by July 2021.

Firms from a number of sectors in the UK have been battling with a supply chain crisis due to a shortage of lorry drivers. On Friday, Logistics UK, which represents freight firms, and the British Retail Consortium (BRC) wrote to the government to plead for new measures to alleviate the problem.

Tesco has been offering lorry drivers a £1,000 joining bonus amid a chronic shortage of drivers in the industry.

Other companies are also understood to be offering similar incentives for HGV drivers after disruption to supply chains led to product shortages. Morrisons said it was working on schemes to train staff to become lorry drivers.

A government spokesperson said last week it was bringing in a package of measures to help tackle the HGV driver shortage, including plans to streamline the process for new drivers to gain their HGV licence and to increase the number of tests that can be conducted.

Although famous for its Big Macs and fries, McDonald’s is actually one of the biggest drinks retailers in the UK.

The shift towards McCafés and promotion of coffee sales was a deliberate policy in the last decade to try to bring in more customers outside of normal mealtimes.

But faced with supply chain issues, it has decided to prioritise its big sellers at the expense of milkshakes. Because every element of the burger needs to be present in the production line, those deliveries are being secured. Bottled drinks can sit in a warehouse much longer without going out of date.

The timing of this shortage coming in the summer holiday season has meant a higher number of customers will be disappointed at missing out on their milkshakes.

Other leading businesses have reported problems caused by driver shortages.

Last week, Nando’s was forced to close about 50 of its restaurants after running out of chicken.

Oil giant BP temporarily closed a “handful” of its UK sites because not enough unleaded petrol and diesel had been delivered.

McDonald’s apologised for any inconvenience and thanked customers for their patience.