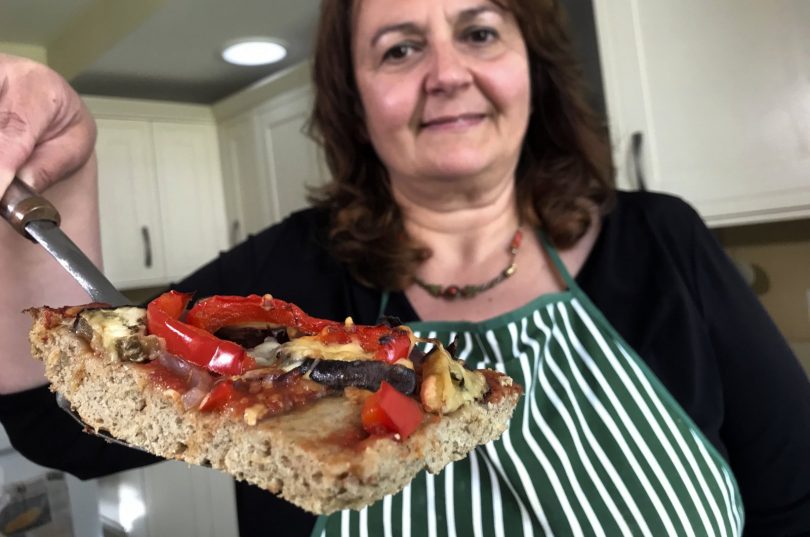 LONDON (AP): After a long day you are tired, you just want to get a bite at a nice restaurant with some friends and you find Tiziana Di Costanzo’s place. The waiter comes to take your orders and reveals the special of the day: pizza. But there is a catch. Di Costanzo makes the dough from scratch, mixing together flour, yeast, a pinch of salt, a dash of olive oil and something a bit more unusual – ground acheta domesticus, better known as cricket powder.

Di Costanzo is an edible insect entrepreneur who holds cricket and mealworm cooking classes at her West London home, where she also raises the critters in a backyard shed with her husband, Tom.

As Earth’s growing population puts more pressure on global food production, insects are increasingly seen as a viable food source. Experts say they’re rich in protein, yet can be raised much more sustainably than beef or pork.

Around the world, 2 billion people in 130 countries eat insects regularly. The global edible insect market is poised to boom, according to investment bank Barclay’s, citing data from Meticulous Research that forecasts it will grow from less than $1 billion in 2019 to $8 billion by 2030.

But despite all the European startups working to make insects appetizing, don’t expect them to start appearing at mainstream restaurants or on dinner tables just yet. One big reason is a strong cultural “yuck” factor in Western countries that Arnold van Huis, a professor of tropical entomologist at Wageningen University in the Netherlands, says will be hard to change.

“It’s very difficult to turn people’s minds around but insects are absolutely safe to eat, maybe even more nutritious than meat products,” with the only risk coming from allergies, because insects are closely related to crustaceans like shrimp, van Huis said.

Instead, humans may end up eating more insects indirectly because the market that shows the most promise is for feeding animals. The EU approved insect protein as feed for fish farming in 2017. The U.S. Food and Drug Administration approved it for chicken feed in 2018, while EU approval for poultry and pigs is due later this year.

Regulatory change has also made things easier for European companies looking to market insects directly to consumers. The EU didn’t previously govern edible insects because they weren’t considered food, leaving individual countries to impose their own rules. To bring rules in line across countries, the EU in 2018 launched a directive that covers insects but requires approvals for individual species, paving the way for a wave of authorizations.

European production of insect-based food products is forecast to mushroom from 500 metric tons currently to 260,000 metric tons by 2030, according to the International Platform of Insects for Food and Feed, a Brussels-based lobby group.

Insects require a 10th of the land, account for a fraction of greenhouse gas or ammonia emissions and need much less water than cattle or pigs, van Huis said.

The first approval came earlier this year for Tenebrio molitor larva, or dried yellow mealworm, after an application from French insect farm Micronutris. The EU Commission’s food safety regulators said in a scientific opinion that mealworms are safe to eat, though they warned of possible reactions in people allergic to crustaceans or dust mites.

Regulators issued another positive opinion this month for grasshoppers, based on an application from Protix, a Netherlands-based insect farming company.

“Our vision is that insects will go from niche to normal,” said Protix CEO Kees Aarts, who predicted an “explosion of food applications” to EU regulators.

The high-tech facility turns the larvae into protein meal and oil for use in fish feed and pet food. The company also has a line of bug-based snacks and ingredients like cinnamon mealworms and cricket protein falafel mix and, after getting final approval, plans to market frozen, dried or powdered grasshoppers as an ingredient for breakfast cereals, pasta, baked goods, sauces and imitation meat.

In London, Di Costanzo’s Horizon Insects is developing an insect-based cooking ingredient after discovering that there wasn’t much of a local market for the fresh edible mealworms they were selling.

Di Costanzo says the cricket powder she uses in her pizza gives it “a very nice, meaty, healthy taste” while boosting the nutritional content with protein, macronutrients and omega acids. Mealworm burgers, meanwhile, are “tasty and very easy to make,” and powdered mealworms have a mild taste that allows them to be incorporated into cakes, bread and pasta.

Antoine Hubert, CEO of France’s Ynsect, says the most lucrative opportunity will come from the sports and health nutrition markets for its mealworm-based protein powder. The company also makes insect protein for fish feed that Hubert said helps farmed salmon grow bigger and faster while reducing the need for fishmeal – smaller fish caught in huge quantities – which helps improve the ocean’s biodiversity.

Investors, including Hollywood star Robert Downey Jr.’s FootPrint Coalition, were among the backers contributing to Ynsect’s latest round of funding worth $224 million. The money will fund a vertical farm north of Paris that it says will be one of the world’s biggest when it’s completed next year, capable of producing 100,000 tons year of commercial mealworm products, as well as expansion in North America, where it plans to build another farm in the U.S. and apply for Food and Drug Administration (FDA) approval for its food products.

Downey Jr. has been promoting the benefits of mealworm powder, supplying a tub of it to talk show host Stephen Colbert.

“I could put this in a smoothie or something?” Colbert asked.

“You’ll be making all kinds of stuff out of it,” Downey Jr. replied.