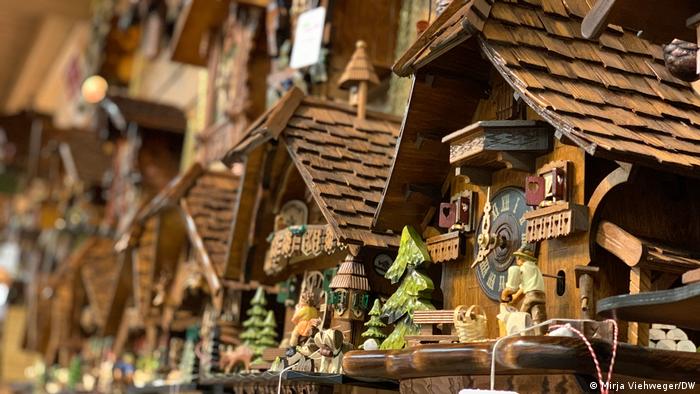 It is one of the most popular souvenirs from Germany: the cuckoo clock. In the Black Forest you can find the largest specimen in the world — as big as a two-story house. This is part five in our “Extreme Places” series.

Why a cuckoo call, of all things, should be used to announce the time remains mysterious to this day. Apparently a clockmaker in the 18th century was working on an alarm clock with the crow of a cock, but struggled to replicate the “cock-a-doodle-doo” with its five tones. Thus he exchanged the cock for a cuckoo. Whether this legend is true is unclear — as is the answer to the question of where the cuckoo clock was actually invented. Today, in any case, it belongs quite firmly to the Black Forest region — just like cherry gateau and the traditional hat known as a Bollenhut. The ornate wooden box with clockwork, pendulum, weights and cuckoo is a symbol of German tradition and craftsmanship around the world.

A cultural asset in huge dimensions

Watchmaker Ewald Eble from the small town of Triberg is also a master of this craft. His family has been producing clocks since 1880. Together with his son Ralf, he has designed a very special model: the biggest cuckoo clock in the world. 60 times bigger than the traditional version, it’s as tall as a real house. The clockwork alone measures 4.50 by 4.50 meters (14.7 x 14.7 ft). Meanwhile, the massive wooden cuckoo that appears at the window on the first floor every half an hour, weighs a stately 150 kilograms (330 lbs). It took the two masters five years to complete. Everything was made by hand using traditional methods, as the clock was to work mechanically, just like the classic small version.

DW reporter Hendrik Welling also wanted to take a closer look at this superlative. He travelled to the Black Forest for the series “Europe to the Maxx” on the culture and lifestyle magazine “Euromaxx”. For the filming, he was allowed to explore the world’s largest cuckoo clock from inside and out. The traditional clockmakers in Triberg let him in on the secrets of the craft. And of course he got to the bottom of the question of how the cuckoo got into the clock. In the video, you can go on the journey with him.

From kitsch to cult

The huge clock in Triberg is now a magnet for visitors. While for a long time cuckoo clocks were considered the epitome of parochialism and kitsch, these days something of a cult has grown up around them. Whether with carved wooden figures, plain and linear or colorful and trendy, they are now more widely sought-after than any other souvenir, especially among foreign tourists. When they take a Black Forest cuckoo clock home with them, they’re taking a little of piece of Germany too.