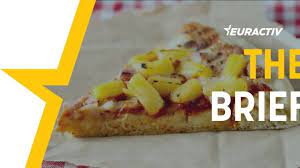 Italy’s latest proud moments in Europe were prepared with an unconventional recipe that would tease purists of Italian culture.

One particular picture from the Euros stayed with me after the competition ended and it was not the one of skipper Giorgio Chiellini lifting the trophy. It was that of an Italian fan holding a banner with a simple message for the English: stop putting pineapple on pizza.

It is no mystery that Italians are overly proud of their (admittedly great) cuisine – and of their culture, in general.

Sometimes they are even poked by others, to provoke their amusing over-reactions to what they see as too bold reinterpretations of traditional Italian dishes – like the famous one by celebrity chef Gino D’Acampo, who went ballistic at the idea of putting sour cream in the ragu.

But this pride can sometimes lead to a form of cultural fundamentalism and closed-mindedness. Italians are notoriously intransigent when it comes to their cultural hard lines and show no compromise.

The Italian team was in control of most of the game, with a ball possession of 61% – even 69% in the first half – and with 20 attempts on goal against England’s six.

This proactive and imposing style of play is quite the opposite of the traditional, defensive catenaccio we were all used to. In the end, the Azzurri dominated their opponents and won at the penalty shootouts – where they don’t have a positive score.

Essentially, they betrayed their football tradition to climb to the top of European football.

And this was not the first time Italy has won something European in 2021.

After many attempts, Italy also won the Eurovision song contest. And they did it with ‘Zitti e buoni’ by Måneskin, a hard rock song that is miles away from the typical Italian pop song.

These European successes, along with that of tennis player Matteo Berrettini, the first Italian ever to reach a Wimbledon final, have lead some to speak of a new Renaissance for Italy this year, at least a cultural one.

“The performances of Måneskin, the national football team and Berrettini at Wimbledon are signs of the country’s dynamism and creativity, which it would be good to see extended to the economic sphere,” Economy Minister Daniele Franco told reporters on Tuesday.

“These new items, even if they are not strictly related to the economy, can help give confidence to and in the country,” Franco continued.

Indeed, there has been no shortage of political interpretations of these new moments of Italian pride.

But the real lesson we can draw is that the version of Italy that is pleasing in Europe is the one that reinvented its tradition and is ready to break new ground.

Most European citizens rooted for Italy in the Euro finals, not only because of Brexit, but because they liked this fresh version of Italian football.

We Italians grew up with the idea that in order to be likeable to others we should rely on our long-standing cliches.

This year turns all that on its head. The most un-Italian football team won the Euros and the hard-rocking Måneskin got a record-breaking amount of votes at the Eurovision stage from all over Europe.

We were raised to bake and sell a very traditional Margherita. It turns out that Europe actually wants some pineapple on it.

I wrote once that the best quote to describe Italian politics is the one included in Il Gattopardo: “If we want things to stay as they are, things will have to change.”

Although generally resistant to change, there’s a part of Italy ready to transform itself with the aim of enhancing its talents.

Opportunities coming from the EU recovery fund are not a blank cheque but a chance to use that money to change.

Even if that means having the guts to put pineapple on pizza.

Sales of new cars and vans that produce carbon emissions will be banned as of 2035, according to proposals tabled by the European Commission on Wednesday, a move which all but guarantees that the era of the internal combustion engine (ICE) is drawing to a close in the EU.

The coronavirus pandemic has affected women more than men in France in 2020, according to the national public health agency Santé Publique France, which said that women’s socioeconomic status played a greater role than purely health factors. EURACTIV France reports.

The wider population’s trust in the scientific community when it comes to food issues remains low and institutions must adopt an ‘audience-first’ approach to help change that, experts have warned.

In an interview with EURACTIV France, French centrist MP Philippe Latombe said France’s approach to digital sovereignty was about choosing which system the country can depend on and pointed to a number of EU countries that were not currently “on the same page.”

With its ‘Fit for 55’ climate package, the European Union finds itself at the centre of a three-dimensional puzzle. Burdens need to be shared between 450 million citizens and 25 million businesses, as well as between member states, in a way that is acceptable to enough of them, writes Georg Zachmann.

Stakeholders remain divided on promotional support for target markets and animal products, with NGOs calling for meat to be cut off cold turkey, while farmers argue no products should be off the table for funding.

Four independent Georgian TV stations suspended broadcasts for 24 hours on Wednesday (14 July) in protest over attacks against journalists and the death of a cameraman.

The European Parliament has called for the creation of a strategy to completely eliminate cancer-causing asbestos in a bid to strengthen workers’ protection and reduce exposure to this common chemical.

Portable artificial kidney is perceived as the next big thing in the field of home treatment that could stop dialysis being a full-time job for patients, but barriers to its rollout persist.