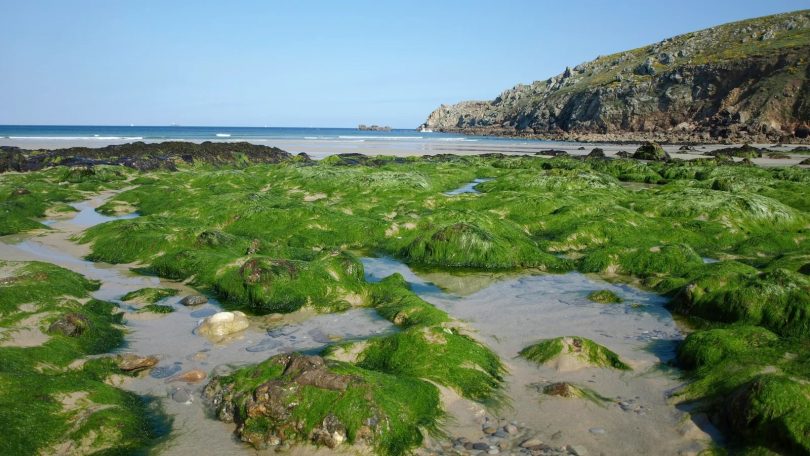 As Scarlette Le Corre edges slowly through the sun-blazed shallows at low tide, emerald sea lettuce and ginger sea spaghetti kaleidoscope around her rubber boots like two-tone marbling ink. No step is taken without first scrutinising the marine life at her feet – this highly trained eye doesn’t miss a subaqueous beat. Snip. A head of rock-clinging sea lettuce unveiled by the ebbing ocean is deftly cut off and popped in her bucket of water. Snip. A fistful of coarse red dulse and clumps of green hairy cheveux de mer (grass kelp) – which sea-vegetable gourmets in France simply rinse, twirl in olive oil and eat – get the chop.

“Nature is generous and gives us many riches,” said Le Corre. “I’ve eaten seaweed for 35 years and am in good form – eat algae and life is très très belle.”

Disarmingly petite and passionate, with a tendency not to mince her words, Le Corre is the original female French fisher. Back in 1979 she was one of the nation’s first women to pass her Brevet de mécanicien à la pêche, qualifying her to captain a saltwater fishing boat, and has since spent four decades working tirelessly in a masculine industry where women at sea are traditionally believed to bring bad luck.

Her day begins at 04.30 in Le Guilvinec, a salt-of-the-earth fishing port in Finistère, southern Brittany – the sort of place where street graffiti reads “plus de pêcheurs, moins de supermarchés” (more fishermen, less supermarkets) and the menfolk spend two weeks at sea working the town’s 43-strong fleet of deep-sea trawlers. By 06:00, Le Corre is alone at sea in her 1950s orange-and-white boat called Mon Copain (My Boyfriend), tending her cultivated sea fields of wakame garlands or casting her nets for sole, red mullet and the occasional lobster or octopus to sell at morning markets in Le Guilvinec and neighbouring Penmarc’h. Afternoons are spent gathering seaweed on the seashore.

“There’s no room for failure in a profession considered only for men,” Le Corre told me, as we scrambled lithely across wet, slimy rocks together. “As a woman in a man’s world, I don’t ask men for help – I assume complete responsibility to the very end.” Mention retirement to this feisty grandmother and her pace only quickens. Her secret? “A slice of bread or toast each morning with tartare d’algues made from raw seaweeds, olive oil, colza oil and rock samphire vinegar,” she explained proudly. 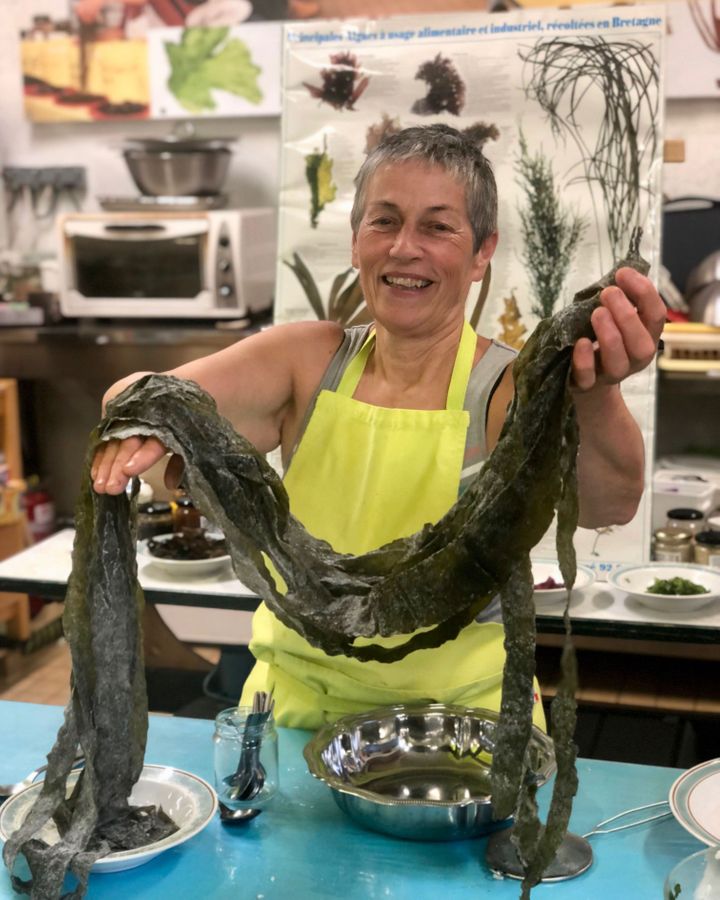 The sea lettuce, dulse and nori Le Corre forages to make the tangy, strong-tasting spread is organic and fresh off the rocks around Pointe de la Men Meur in Le Guilvinec. Long ago historians identified this flat granite headland, pocketed with bizarre lunar-like sinkholes, as the site of a quarry where millstones were dug out in the Middle Ages, and later, until the 17th Century, round stone bases for the many roadside crosses peppering this Celtic region in north-west France.

Scavenging for wild algae along Finistère’s rocky coast has been a natural pastime in this staunchly seafaring part of the world since time immemorial. The daughter of a fisherman, Le Corre began working with seaweed to supplement her fishing income in the early 1990s – long before the ugly-but-edible sea vegetable became a fashionable “superfood”. Algaculture is a centuries-old living Breton tradition she simply grew up with. “I have collected seaweed from the moment I could walk. My parents went, and I followed,” she said. In April alone, at the height of the wild seaweed season, Le Corre typically gathers 10 tonnes of thongweed (sea spaghetti), Breton kombu and royal kombu along the rocky seashore – all by hand with a knife and scissors.

Scavenging for wild algae along Finistère’s rocky coast has been a natural pastime in this staunchly seafaring part of the world since time immemorial.

Powerful memorabilia at the Écomusée des Goémoniers et de l’Algue (Museum of Seaweed Harvesters and Seaweed) in the village of Plouguerneau, further along the coast in Pays des Abers, tells the Breton algaculture tale. Black-and-white photographs show 19th-Century goémoniers (seaweed harvesters) raking kelp – the generic name for brown drift weeds – washed ashore on sandy Breton beaches and piling it onto horse-drawn wagons with pitchforks. Antiquarian prints depict them carting the kelp off to nearby sand dunes to dry and burn it for several days in open-air ovens. The stench of acrid smoke was vile, but the valuable iodine-rich ash could be sold to iodine factories on the northern coast for glass making. Remaining cinders were scattered on farmland as fertiliser.

Other harvesters worked out at sea from flat-bottomed wooden boats, using long-handled sickles to guillotine strands of weed growing in wild underwater kelp forests near the shore and around offshore islands: 25 tonnes of cut kelp produced 1 tonne of ash or 15kg of iodine. Harvesting was strictly seasonal (March to September) and everyone had a second occupation – fishing or farming – to ensure a year-round income.

Today, algaculture produces more than 30 million tonnes of seaweed globally a year and is booming (35.82 million tonnes in 2019 compared to 4.2 million in 1990 and 0.56 million in 1950, according to the UN’s Food & Agriculture Organisation‘s 2020 World Fisheries and Aquaculture Report). However, European farmers remain responsible for less than 1% of world production and favour wild stock over farmed. But in Brittany, where the rocky coastline tangoes for 2,700km and 1,000-odd islands and islets speckle the pristine offshore waters, the landscape is slightly different. Exceptional water quality, coupled with miles of protective rocky shores to keep strong currents at bay, render Brittany seaweed farmland par excellence.

“Seaweed flourishes in temperate water and sunlight, which is why it grows in shallower waters near land,” Le Corre explained. In the sea, not far from shore, a myriad of white dots bobbing on the water could easily be mistaken for a colony of resting seagulls. The floating grid of white buoys is actually her cultivated sea field. 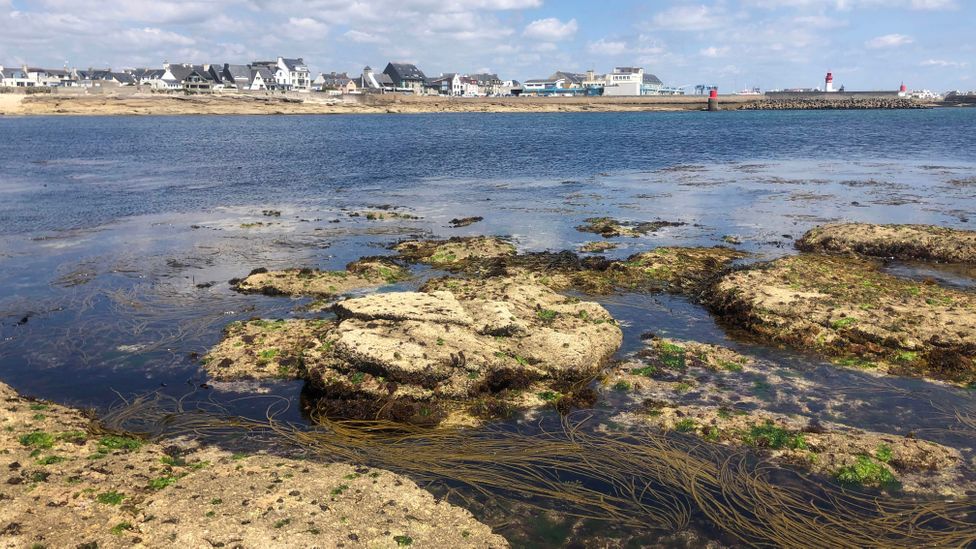 The rocky headlands around Brittany’s coast make this the perfect location for algaculture (Credit: Nicola Williams)

Some 850 seaweed varieties flourish in Breton waters, responsible for the sum total of French seaweed production: 75 goémoniers in Brittany hand-pick 5,000 tonnes of wild seaweed a year and 35 farmers harvest 65,000 tonnes from Breton sea fields. It is no coincidence that one of Europe’s largest seaweed fields – 150 hectares of brown laminarians (royal kombu, dulse and wakame) cultivated by organic producer Algolesco next door to Le Guilvinec in Lesconil – grows in the middle of a marine nature reserve protected for its valuable species and habitats by the European Union’s Natura 2000 network. Algolesco recently began exploiting another 207 hectares in sheltered waters offshore from Moëlan-sur-Mer, further east.

“Seaweed demand is exploding – soon it will be a luxury product,” asserted small-scale farmer Le Corre, who yields three tonnes of organic wakame a year from her single hectare at sea. Each October she suspends her culture lines of baby seaweed in the Atlantic and six months later, after several nail-bitingly destructive winter storms, she sets sail in Mon Copain to heave out lines heavy with silky, nutrient-laden wakame.

Seaweed demand is exploding – soon it will be a luxury product

For centuries Bretons have boiled frizzy-red pioka (Irish moss) in milk to make a natural gelling agent used in far Breton (a type of clafoutis or sweet batter flan). Long before the invention of aluminium foil, cooks in Brittany wrapped fish in leaves of nori or dulse to keep it moist while cooking. On Breton islands where trees are few, seaweed substituted firewood as fuel until well after World War One. On Île de Molène, islanders traditionally smoked rolls of hand-cut pork over a seaweed fire for five consecutive days to create aromatic sausages called saucisses de Molène, and they remain an artisanal speciality.

For centuries seaweed was considered a poor man’s food – it was originally fed to cattle after all – and was only really embraced by vegetarians in the late 20th Century. Today a new generation of contemporary chefs in Brittany, like David Royer at Castel Ac’h (Plougeurneau) and Mickaël Renard at Hôtel de la Mer (Brignonan), are embracing Brittany’s natural bounty of sea veg with newfound gusto.

“I take the best of what I have around me – which is what grows in my garden and the sea, my ‘other’ garden right in front of me. It is now fashionable to eat seaweed, but it has always been eaten here in Brittany,” said Royer. “In a restaurant you have to be careful how you present it on the plate. If it looks like seaweed, it doesn’t work – but incorporate small pieces throughout and it is sensational.” 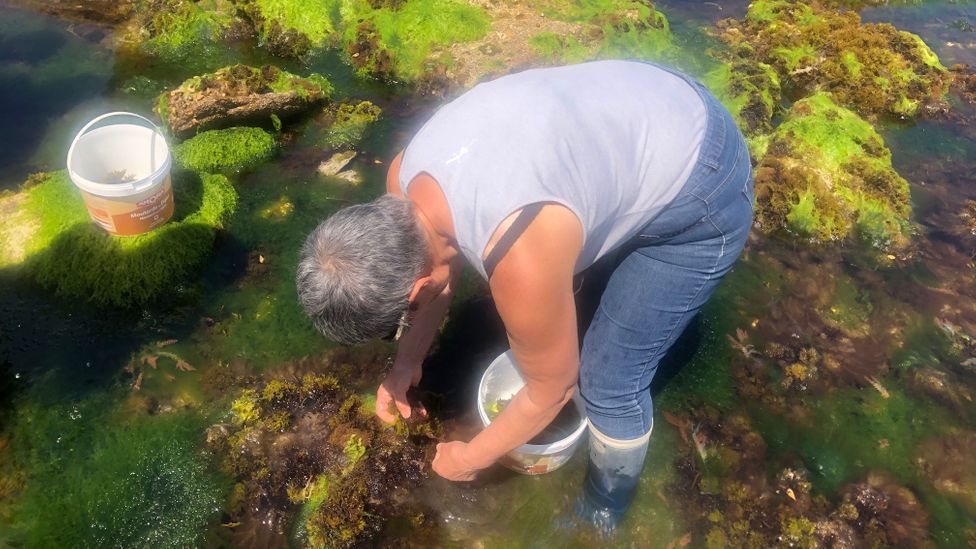 As canny in the kitchen as at sea, Le Corre cooks up a seaweed storm at her wildly popular dégustation (tasting) and cooking workshops, where she demonstrates how ancient conservation methods (such as salting and pickling) and family recipes marry with local algae to sensational effect: syrupy wakame jam paired with warm goats’ cheese on toast; mackerel and wakame rillettes; a sweet spoon of velvety salted butter caramel peppered with wakame flakes.

Each dish combining her dried or fresh salted seaweeds, mustards, condiments and chutneys is sublime. Each is also turbo-powered when you consider that sea lettuce, for example, contains eight times more vitamin C than an orange and 10 times more calcium than milk. Chemical- and preservative-free, the only source of nutrients in algo-cuisine is the natural ebb and flow of the tide and the rise and fall of the sun.

“A fistful of seaweed is food for a month. Everything traditionally done with fruit and vegetables, I do with seaweed,” said Le Corre with pride. “It is my heritage – a savoir faire born from the beaches I grew up on, the rocks I mucked around on, the endless days I spent with my father at sea 60 years ago.”