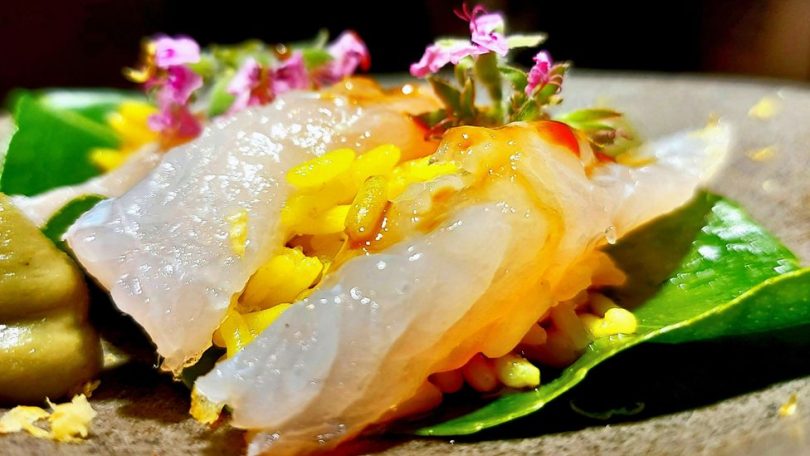 On verdant Skopelos, locals have been curing and rolling fish for generations in a “sushi-style” preparation that dates back to medieval times.

“What are you doing? Why are you throwing it away?” cried Nikos Stamatakis to a young fisherman who’d just disentangled a huge moray eel from a net full of red snapper on the shore of Skopelos, a Greek island in the Western Aegean Sea.

“What do you want this ugly beast for?” asked the fisherman of the beady-eyed eel.

“I’ve been searching for it for long now. This is the finest sushi you are about to scrap,” Stamatakis replied.

This is a typical dialogue that Stamatakis, a seasoned chef, shares with Skopelos fishermen, who grumble each time this “low market-value fish” gets caught in their nets or uses its razor-sharp teeth to cut their long lines.

But Stamatakis, a culinary connoisseur who comes from a long generation of Skopelos taverna owners, knows the splendid cooking potential of this misunderstood fish. The moray eel’s consumption goes back to the glorious days of Ancient Greece, he says. In fact, the cured version of this two-jawed eel, on which Hollywood is rumoured to have modelled some of its alien scares, might even be Europe’s first “sushi”. 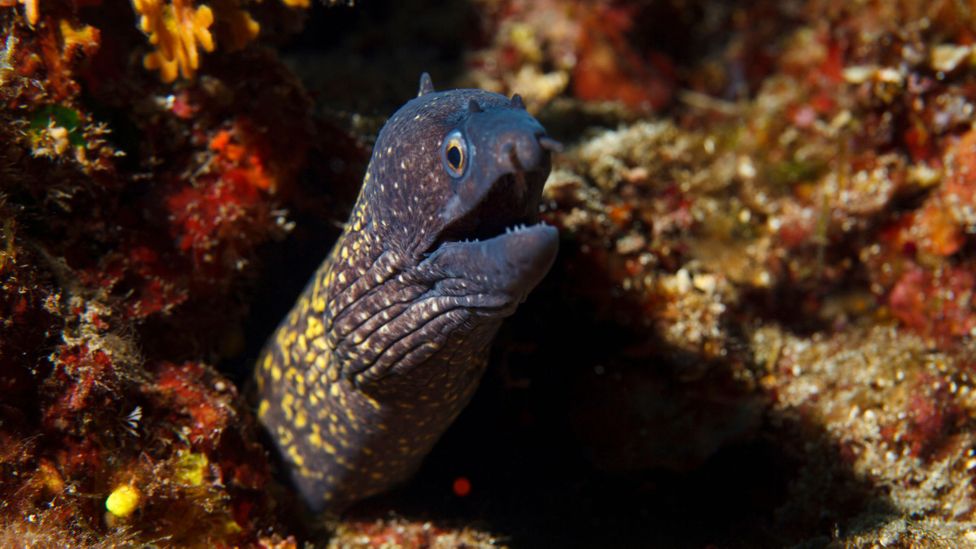 Once a popular food on Skopelos, moray eel has fallen out of fashion over the last few decades (Credit: Ultramarinphoto/Getty Images)

“You fillet the fish, roll it up and stuff it with plums and greens. You can then salt or smoke it in a wood burning stove or in the oven,” said Stamatakis. He explained that locals have long been curing and rolling the fish in this “sushi style”, with some Skopelites stuffing the fish with rice – though plums and vegetables were preferred on special occasions like engagements. “Mother-in-laws-to-be would knock on the grooms’-to-be door with this version of the dish in hand before the wedding,” he said.

While most people associate sushi with raw fish, the earliest form of sushi, called narezushi, consisted of fish preserved with salt and raw rice. Narezushi is is thousands of years old and traces its roots to the rice fields of China. Just as the people inhabiting these regions found a way to preserve and ferment local fish with salt to survive periods of heavy monsoons and intense heat, so did Skopelites salt-cure the moray eel to enrich their local cuisine.

You may also be interested in:
• Why you’ve never had ‘real’ sushi
• The Greek island seeking new residents
• The last speakers of ancient Sparta

Curing and rolling the fish in a “sushi-style” preparation, as Stamatakis describes it, is unique to the island and cannot be found anywhere else in the Mediterranean. Stamatakis learned the dish from his grandfather, a sailor, farmer and cook, who, in turn, learned it from the monks of Mount Athos. Just like the ascetics, Stamatakis’s grandfather salt-cured the fish before rolling and stuffing it.

Mount Athos (or Holy Mountain) is a collective name for a mountain and peninsula in north-eastern Greece, about 110km northeast of Skopelos. It is the spiritual centre of Orthodox Christianity and a self-governed territory since Byzantine times, made up of 20 monasteries, 12 smaller monastic settlements, about 700 houses, cells or hermitages, and approximately 2,000 monks. Up until the first half of the 20th Century, Mount Athos owned a lot of Skopelos land, Stamatakis said, and many locals in pursuit of farmland started to trade with the ascetics. One of them was Stamatakis’s grandfather. He bought land in Glossa, an amphitheatrically built village on top of a steep hill, 25km northwest of Skopelos’ capital, also called Skopelos or Hora.

“He, and basically everyone that came into contact with the monks, got impressed by their Byzantine culinary traditions, especially the way they cured moray eel [by salting or smoking it]. This is an old recipe. There is even mentioning of Ancient Greeks keeping moray eels in aquariums in Deipnosophistae (an early 3rd-Century AD, multi-volume Greek tome considered to be the oldest surviving cookbook),” said Stamatakis. “Skopelites loved the dish and brought it back to their wives on the island.”

A far cry from the dry and barren Cyclades, Skopelos is Greece’s greenest island. Pure, unspoiled flora makes up 67% of the isle, old mule trails crisscross it, and olive orchards give way to charming villages that emerge out of endless pine forests. Reminders of the Byzantine Empire and the connection with Mount Athos can be seen everywhere as the island is dotted with 360 chapels and churches. Skopelos is also a seafood haven, with its inhabitants taking pride in cooking lobster baked with orzo pasta or stuffed sea urchins and barnacles with rice. 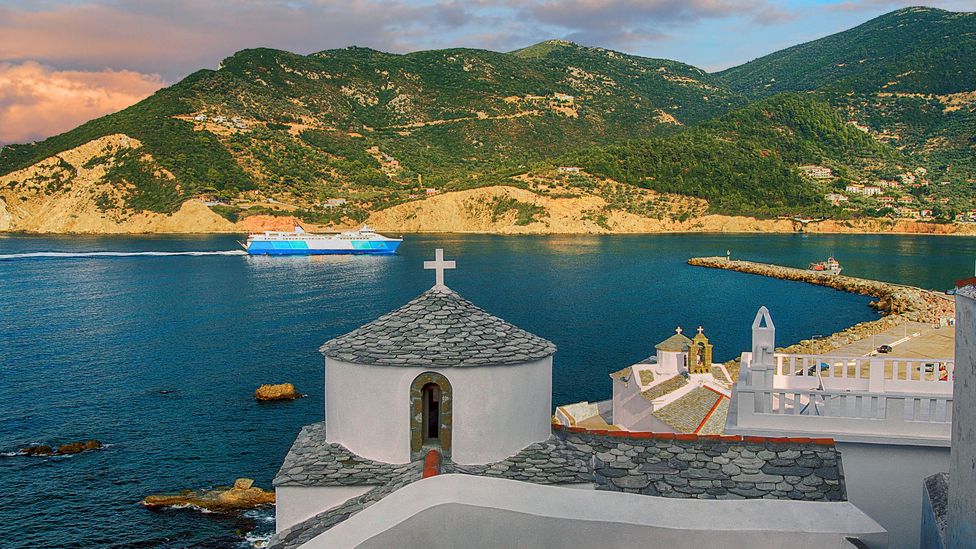 “Skopelos is the most beautiful island in the world,” said Giannis Stamatakis, Nikos’ uncle, who holds two impressive records. At 101, he is not only the oldest man on Skopelos, but also its oldest plum producer (with eight different varieties of plum trees, the island is a plum paradise).

Slim and well-groomed, with an admirable zest for life, “barba-Giannis” (barbas means uncle in Greek) can’t understand why the Skopelites of today despise his favourite food – smoked moray eel.

It seems young people don’t like its face. Or maybe it’s too much of a fuss for them to prepare

“When I was a kid, I would go fishing and jump for joy if I caught a moray eel,” he told me. “I would bring it back home to my mother to cook it and we would have a feast. It tasted like butter, juicy and delicious. But, today, neither me nor my nephew can find it anymore. It seems young people don’t like its face. Or maybe it’s too much of a fuss for them to prepare it as the damn thing slips through your hands,” he added, in almost one breath.

Machoula Stamataki, Nikos Stamatakis mother, agrees. “We used to love eating cured moray eel back then,” she said. “Alas, they don’t eat it anymore. Maybe it is because it is too difficult to clean and cook? Younger generations don’t know what they are missing.”

The Stamatakis family lament the modern lack of appreciation for this fine fish, putting it down to changing tastes since tourism came to the island around the late 1960s. “Perhaps Skopelites became spoilt for choice, but we knew better… and my grandfather told me our ancient ancestors loved it too,” barba-Giannis said.

Moray eel has a long and distinguished legacy on the island. Ancient Greeks loved moray eel, according to Andrew Dalby, historian and author of Siren Feasts: A History of Food and Gastronomy in Greece. “In his Gastronomia poem, Archestratus, an Ancient Greek poet, wrote that if his readers ever caught a floating moray eel between Sicily and Italy, they should cherish it because it was an amazing food,” Dalby said. 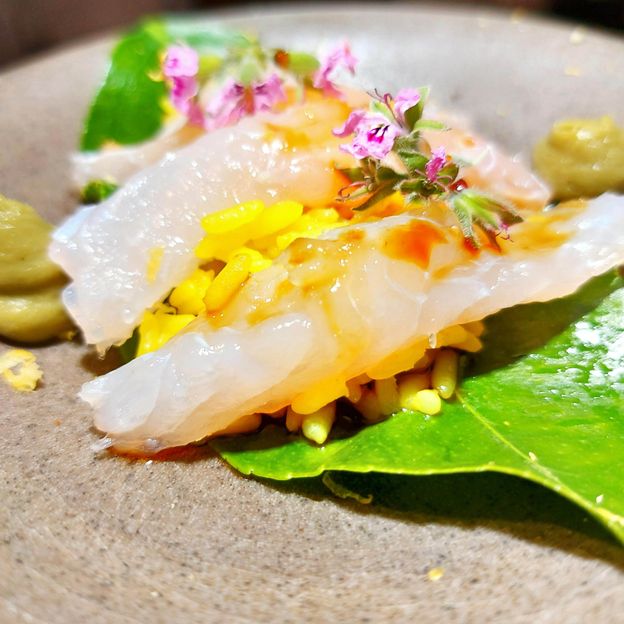 Dalby explained that Ancient Greeks appreciated fish cooked as simply as possible, “so they would grill or roast the moray eel over a fire and add very little olive oil or herbs as dressing, because they wanted to get the full flavour of it,” he said. It is a fondness of culinary simplicity you can still see in modern Greek tavernas, he continued, adding that locals in ancient times weren’t then used to eating salt-cured fish. According to Dalby, this cooking technique was brought by Arabs to the Mediterranean region in medieval times, eventually making its way to Skopelos.

“I’ve been retracing this kind of cooking that is used in Spain’s escabeche (a fried fish dish that’s marinated and served cold),” Dalby said. He notes that escabeche was first practiced in early medieval times and was derived from al-sikbaj, a popular meat dish that was cured by marinating the meat in vinegar and sour fruit juice in place of some of the cooking process, and which was cherished by the Persian court. “When sikbaj crossed over to the Mediterranean through the Arabs, it gradually turned into a form of fish cookery as its preparation worked well for fish,” Dalby said. Mediterranean people, it seems, took the light cooking process one step further, experimenting with salting or smoking the fish instead of just curing it in an acidic marinade.

He explained that through the Arab influence along the shores of the Mediterranean, this curing technique was either passed to Spain and spread across the Mediterranean; or it was passed from the Arabs to Byzantine Greeks to Mount Athos ascetics and finally to Skopelites. He notes that the second route of transmission gives a stronger explanation for how Skopelos ended having its own “sushi”. “In any case, the final stage of that evolution of escabeche appears to be the moray eel dish on Skopelos,” Dalby said.

But whatever the truth about how this cooking technique arrived on the island, it is no stretch to surmise that the Greeks may have invented Europe’s own version of “sushi. “It was the Greeks – first of any known people – who developed gastronomy around fresh fish and considered the moray eel to be a high-quality gastronomic choice,” said Dalby. “It is almost certain that the Greeks thought first of using this ‘sushi’-cooking style with the moray eel.” 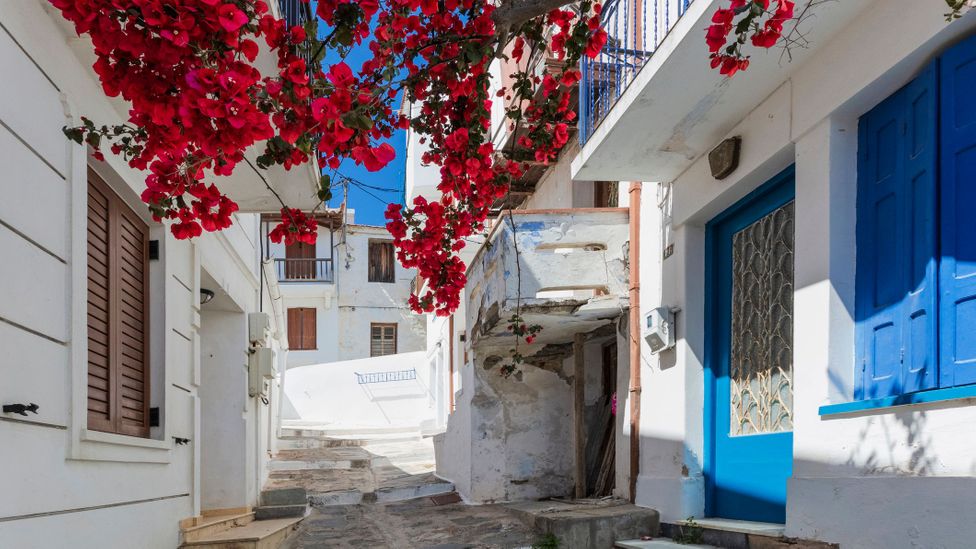 The “sushi-style” preparation cannot be found anywhere else in the Mediterranean (Credit: Evgeni Dinev Photography/Getty Images)

Barba-Giannis and others that frequented Glossa’s taverns before the tourist explosion of the 1960s didn’t know that they were eating a dish with such a glorious and complex history, of course. Nor did they care. They would have embraced the unsightly fish whether it came with a celebrated tradition or not. It was just too delectable. “We loved the moray eel back then. We fished and cooked it with uttermost care,” the centenarian said.

Old Skopelites would carefully remove the slime off the back of the moray eel, wash it in abundant fresh water, fillet and salt it, and then salt or smoke it. And they would take their time with it. “Today, people eat fast and clumsy,” barba-Giannis said.

On the contrary, for his generation, the diligent preparation of the moray eel was a labour of love and a kind of ritual bonding bringing the community together. But, even if modern Skopelites seem to have developed an antipathy towards these unfortunate-looking creatures, old moray eel “sushi” cooking techniques are still going strong on the island, according to his nephew.

“We are applying the same techniques on smaller fishes like sardines,” said Stamatakis. He only occassionally makes moray eel sushi, usually stuffing it with rice. “The moray eel tastes much better, but the ‘sushi’ technique is still here.”