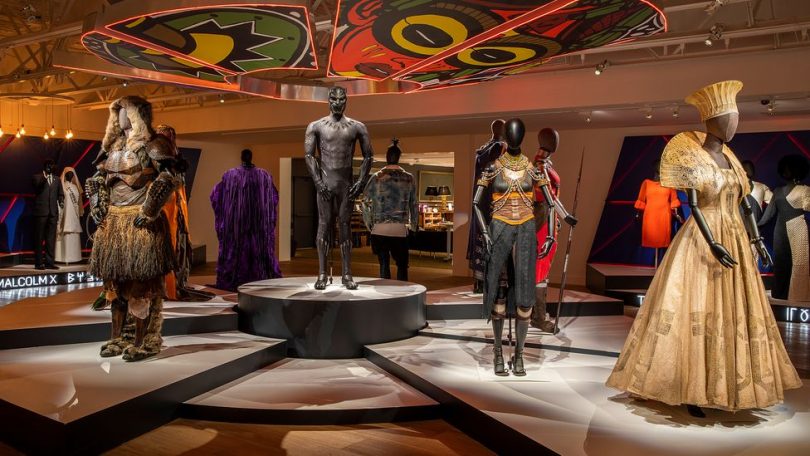 It’s hard to overstate Ruth E Carter’s achievement in costume design on Black Panther, even now, three years after the film’s release. She did, after all, win an Oscar for it. Not only did a massive movie franchise like Marvel finally put a leading black superhero on screen, but he was regally dressed too. As many pundits noted, the film marked a defining moment for black America. But it was a moment that also reverberated throughout the world, not least on the African continent itself, where the Basotho blankets and Ndebele neck-rings were instantly recognised for the items of rich heritage they are. It was a moment of pride that for so long had been denied to Africans portrayed on screen in Hollywood productions.

Twelve of those Black Panther costumes form part of an exhibition at Atlanta’s Scad Fash Museum of Fashion + Film exhibition dedicated to Carter’s career, titled Afrofuturism in Costume Design. Running until mid-September, the exhibition is the story of the 60-year-old’s ascension as one of only two costume designers in history – and the first black woman – to have a star on the Hollywood Walk of Fame. It’s also the story of how Carter has played a groundbreaking role in the way African fashion is seen.

“I still get excited talking about Black Panther now,” Carter tells BBC Culture, over a video call from Atlanta. “It’s amazing how meaningful it is, even for me, being an African-American, to connect to  something real from Africa and put it in a movie and show the world: ‘This is part of South African culture’ or ‘This is from the Lesotho people’. It makes it so much more meaningful; it has so much more depth.” Through Black Panther – which became the 12th highest-grossing film ever, and saw fans attend screenings in traditional African attire to celebrate its release – Carter imbued fantasy costumes with very real significance, informed by her research into various parts of African culture.

How do you show that culture lives and breathes no matter what your circumstances are, that we’re always aspirational? – Ruth E Carter

Working together with Oscar-winning production designer Hannah Beachler, Carter borrowed from indigenous people across the continent, like the Tuareg of the Sahara and the Himba of Namibia, and also built a palette out of the Pan-African flag colours, using black, red and green across the main cast’s costumes.

By the time she worked on Black Panther, Carter already had dozens of films to her credit, and was Oscar-nominated for Amistad and Malcolm X, and Emmy-nominated for Roots in 2016. As the exhibition shows, Carter’s path as a costume designer has been cemented by her ability to bring different facets of black experiences to the big screen. The underlying theme of the exhibition – and to a great extent, her career is, she says: “How do we show that slaves had an idea of their own Afrofuture? How did they visualise their Afrofuture? How did you show that with Amistad? With Selma? How do you show that culture lives and breathes no matter what your circumstances are, that we’re always aspirational?”

Black Panther allowed Carter to “connect everything I’ve done about slavery and about how Africans came to this country, and what happened to their culture,” she says.

African filmmakers, from the early works of Senegal’s Ousmane Sembène to the breakout stars of Nigeria’s popular Nollywood titles, have long used film and TV to tell their stories, and to reflect back particular styles and sensibilities of their culture. Many classics remain influential today, in the way that Jay Z and Beyoncé’s On The Run II tour poster was inspired by Djibril Diop Mambéty’s 1973 film Touki Bouki, or Vogue writes about the enduring, if tragic, sophistication of Sembéne’s 1966 film La Noire de. Netflix, too, is streaming more content produced in Africa these days, feeding an appetite for homegrown movies and TV shows that go deeper than the Hollywood stereotypes typically have.

Africa doesn’t need Hollywood, but thanks to the work of costume designers like Carter – along with the rise of social media, particularly Instagram – we’ve begun to enjoy a far richer experience of the continent’s fashion on screens beyond its borders. While Hollywood has been playing catch-up in decolonising the gaze that has for so long informed its productions – buoyed by a leftover legacy of Western filmmakers depicting Africans as exotic and wild, in decades-old tales like Out of Africa and The African Queen – the depiction of its fashion has progressed. Less animal print and ‘curio’ items, more accurate reflections of individuals with agency.

The remarkable costumes that Carter created for Black Panther won her an Oscar (Credit: Alamy)

Black Panther was not the first time a costume designer for a major studio production relied on real African influences to portray a fictional African country. In 1989, in the first Coming to America, Deborah Nadoolman Landis looked to the late Emperor of Ethiopia, Haile Selassie, for the outfits of King Jaffe Joffer (James Earl Jones) and to Senegal for the kaftan that Queen Aoleon (Madge Sinclair) wore in Zamunda. Nadoolman, who scored an Oscar for the costumes, had been an avid lover of African arts and textiles, long before the Coming to America screenplay was written.

While the storyline itself may still have a way to go in its reliance on old tropes, Carter, as costume designer for the sequel, elevated Coming 2 America by tapping actual designers working in Africa to assist creating the film’s 800 costumes. Expanding what she started doing on Black Panther, she helped expose local fashion designers to a wider audience, and also showcased their individual triumphs. In the patterned knitted vest that Eddie Murphy’s Prince Akeem wears in a scene with his newfound son is the 10-year success story of South African designer Laduma Ngxokolo’s Maxhosa. In the dresses that Prince Akeem’s daughters wear is the fashion empire that Palesa Mokubung – the first African designer to collaborate with H&M, in 2019 – has built.

“Their collections mean so much more to them than just fashion,” says Carter. “Their collections represent their childhood and their pride in being South African.” Indeed, Ngxokolo’s creations come from a desire to update clothing for the initiation ceremony of his Xhosa upbringing. Ghanaian designer Mimi Plange, too, draws on Nuba painting and scarification in her work, like the hand-painted leather skater dress that Kiki Layne wears in Coming 2 America. The details contribute to giving film-goers a more expansive view of Africa, and not stuck in time either.

“The film is much more modernised,” Ngxokolo tells BBC Culture. “The ideas of fashion in the first one were from the predictable perspective, the way the world usually sees African fashion. But there’s more innovation in the second one.” Ngxokolo says that collaborations, like working with Carter, help the interpretation of African fashion outside the continent. “It makes it legit and relevant as well, because we know our culture better than anyone, so who better person to ask?”

Black Panther and Coming 2 America tailored their fashion to sci-fi and comedic specifications, but this attention to detail is being seen beyond the big screen too. On an all-American TV soap like Dynasty, Sam Adegoke’s high-powered Jeff Colby embraces the actor’s Nigerian heritage in the dapper shirts and suits he dons. Designs from Senegalese label Tongoro have also been seamlessly featured on Dynasty, as well as on Queen Sugar and Insecure.

That desire for invention, for those utopias, is also another way of resistant living – Awam Amkpa

It all contributes towards a ‘normalising’ of Africa, as Mobolaji Dawodu sees it. The Lagos-raised, Brooklyn-based GQ fashion editor, who relies a lot on local African tailors in his work, was costume designer on Disney’s Queen of Katwe, in 2016, Andrew Dosunmu’s Restless City (2011) and Mother of George (2013). While they may not have been as commercially successful as Black Panther, these films still moved the mark greatly for African fashion on-screen.

Beyoncé, seen here in the video for Spirit, is among the artists who have been inspired by African fashion (Credit: Disney)

“There have been generations of images of Africa that weren’t positive,” says Dawodu. “In some ways, American culture and Western culture is steeped in the idea of presenting Africa as inferior. It’s not even just in one movie where you saw that.”

He credits Black Panther with raising the consciousness of the world about Africa but says music has played an even bigger part. Of course, another Carter has been instrumental – Beyoncé Knowles Carter. Through Black is King and her Black Parade guide to black-owned businesses, the Grammy-winning star has showcased many African labels. Ivorians Lafalaise Dion and Loza Maléombho and Senegal’s Tongoro Studio by Sarah Diouf and Adama Paris are among the prominent designers who were headhunted by her longtime stylist, Zerina Akers.

For her Spirit video, Beyoncé wore a monochromatic outfit featuring a black-and-white suit complete with a durag, facepiece and earrings by Tongoro, a brand she also sported at the Global Citizen Concert in South Africa in 2018. At that event, the singer also showed off a “metamorphosis dress” by South African duo Quiteria and George along with an ancient Egyptian beaded bodysuit by Enhle Mbali Maphumulo.

But even before Beyoncé’s various African showcases, her sister Solange celebrated Cape Town’s sapeurs – a Congolese subculture that has its own established chapter in South Africa – in the 2012 video for Losing You.

And before Cameroonian designer Claude Kameni’s label Lavie by CK appeared in Coming 2 America, in the form of Mirembe’s wedding dress, the West African-textile-inspired line was being worn by stars like Tracee Ellis Ross (while hosting the 2018 American Music Awards) and Viola Davis (on a Vanity Fair cover). Similarly, before Ozwald Boateng’s teal single-button suit with lip plate wowed in Black Panther, the British-Ghanaian had carved out a space as the youngest designer on London’s Saville Row.

But Black Panther coalesced a lot of the moments that came before it. It gave Boateng, for example, the chance to embrace his African heritage, in a way he hadn’t before, as Carter explained to Vulture. “Usually we see this lip plate in National Geographic on women with no tops who are sitting on the ground, and here is [a man] with his legs crossed and a beautiful suit by the fashion designer Ozwald Boateng. He is bringing so much pride and so much honour to it.”

Above pride, above honour, it’s about imagination, believes Awam Amkpa, NYU interim dean of arts and humanities, and professor of drama, social and cultural analysis. “What we’re seeing affirms Africa is more than a place; Africa as spaces of affect,” he tells BBC Culture. “And as spaces of affect, they can generate utopias, and that’s what Africans give to themselves to survive the complex and sometimes derogatory history of the continent.”

Carter’s utopian vision will be broadened out in the Black Panther sequel (Credit: Scad Fash Museum of Fashion + Film)

He says this is true for Africans in the diaspora and those coming from a similar background too, and becomes even more so when juxtaposing a film like Black Panther against the Black Lives Matter movement. “For a people for whom temporality is a space of violence, they’ve got to imagine other spaces where they can be subjects rather than objects,” he says. “That desire for invention, for those utopias, is also another way of resistant living in an America that continues to negate people and their communities.” Fashion is a way to rewrite the script.

As Carter begins work on the Black Panther sequel, and London’s Victoria & Albert Museum starts curating a 2022 African fashion exhibition, there will be more to come. “The first Black Panther was an experience we’ll never repeat again,” says Carter. “The new one will be a continuation and a broadening of the story.”