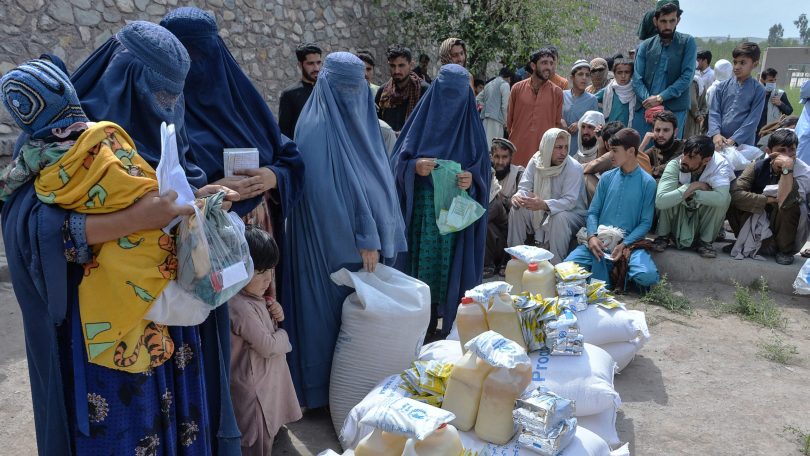 he Taliban reportedly is holding over 500 tons of humanitarian aid, which the United Nation’s World Food Program says is stuck at the Afghanistan border, according to the Associated Press.

U.S. Ambassador Linda Thomas-Greenfield urged that the aid be allowed into the country, and the U.N. Security Council wrote a statement calling for immediate access for U.N. and other humanitarian personnel to provide aid, “including across conflict lines.”

The statement, drafted by Estonia and Norway, called for “an end to all abuses and violations” of human rights and international humanitarian law. Thomas-Greenfield additionally called for the Taliban to allow people to leave Afghanistan safely.

“All Afghan nationals and international citizens who wish to depart must be allowed to do so safely,” Thomas-Greenfield said, adding that the U.S. promises “to be generous in resettling Afghans” and “we need to all do more.”

The U.N. Security on Monday called for an immediate end to violence in Afghanistan following the Taliban takeover of the country and inclusive talks to form a new Afghan government that includes women.

In its first statement since the Taliban a day earlier ousted the U.S.-backed President Ashraf Ghani, who has since fled Afghanistan, the council stressed that Afghan territory should not be used by the Taliban or any other group “to threaten or attack any country.”

The U.N.’s most powerful body called for “urgent talks to resolve the current crisis of authority in the country and to arrive at a peaceful settlement through an Afghan-led, Afghan-owned process of national reconciliation.”

It said a new government must be “united, inclusive and representative—including with the full, equal and meaningful participation of women.”

U.N. Secretary-General Antonio Guterres called for an immediate end to violence and urged the international community to unite to ensure that the human rights of all Afghans are respected. He said he was “particularly concerned by accounts of mounting human rights violations against the women and girls of Afghanistan who fear a return to the darkest days” in the 1990s when the Taliban ruled and barred girls for getting an education and imposed draconian measures on women.

“The world is following events in Afghanistan with a heavy heart and deep disquiet about what lies ahead,” Guterres said, and with the country’s future and the hopes and dreams of a generation of young Afghans in the balance, the coming days “will be pivotal.”

Afghanistan’s U.N. Ambassador, Ghulam Isaczai, said, “there is no time for the blame game anymore” and echoed Guterres’ calls for the council to call for an immediate halt to violence and respect for human rights, and to “prevent Afghanistan descending into a civil war and becoming a pariah state.”

He told the council he was “speaking on behalf of millions of people in Afghanistan, whose fate hangs in the balance and are faced with an extremely uncertain future,” including “millions of Afghan girls and women who are about to lose their freedom to go to school, to work and to participate in the political, economic and social life of the country,” as well as human rights defenders, journalists, academics, civil servants and former security personnel.

Isaczai, who was appointed by Ghani’s government said, “Kabul residents are reporting the Taliban have already started house-to-house searches in some neighborhoods, registering names and looking for people in their target list. There are already reports of targeted killings and looting in the city.”

“Kabul residents are living in absolute fear right now,” Isaczai added and appealed on the U.N. chief and the council not to recognize the restoration of the Islamic Emirate that the Taliban may impose.

Isaczai also called for the urgent establishment of “a humanitarian corridor for the evacuation of those at risk of Taliban’s retributions and attacks” and for neighboring countries to open their borders to people trying to escape and for humanitarian goods entering the country.