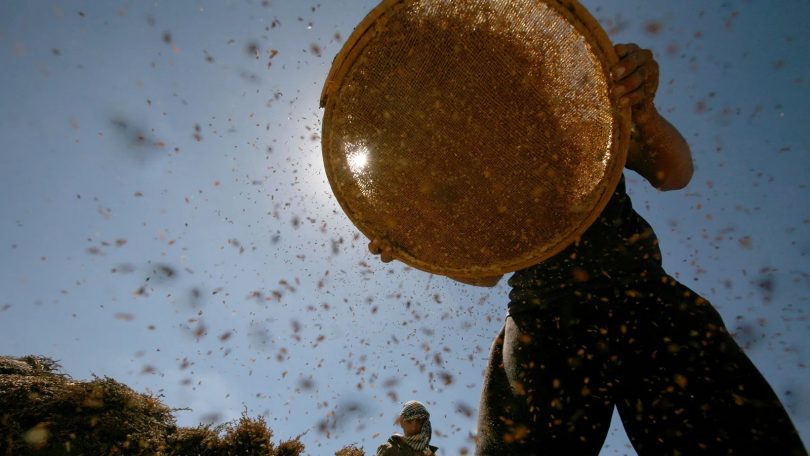 West of Bethlehem, rugged stone-strewn mountains frame a green valley winding into the sun-hazed distance. The West Bank village of Battir nestles onto the side of one of the mountains, its beige stone houses blending into the natural surroundings. From afar, the only other hint of human inhabitants is the ancient terracing that lines the mountain like a giant staircase.

These terraces are rock-walled agricultural plots that have grown olives and vegetables since antiquity. Such farm designs, along with the ancient spring-fed irrigation system, secured Battir a place on the Unesco World Heritage List in 2014. This ancient landscape couldn’t be a more perfect home for an initiative, led by Vivien Sansour, that saves Palestinian heirloom seeds and in turn preserves cultural roots.

Sansour didn’t start out intending to create The Palestine Heirloom Seed Library. Born out of a longing to find the traditionally grown Palestinian food she grew up eating, the seed library took root in 2014 when Sansour started asking people in her community for seeds to grow baladi bandora (“my country’s tomatoes”), a drought-resistant heirloom tomato perfectly adapted to the region. Baladi, the term for heirloom seeds, translates directly as “my country”.

“I would ask about them and people would say ‘Oh, no-one has them anymore’, ‘Oh it’s dead and gone’,” said Sansour. “I couldn’t surrender to the idea that everything is dead and gone. I insisted in my heart that not everything is lost. I didn’t set out thinking I was going to start a seed library; I was just longing for the things I love.”

To Sansour, seeds are living beings, and to see heirloom seeds disappearing is a human tragedy. So far, Sansour has saved 47 varieties of Palestinian heirloom seeds, including one of her favourites, the jazar ahmar purple carrot, as well as the drought-resistant  J’adii watermelon, originally from the agricultural city of Jenin in the north. 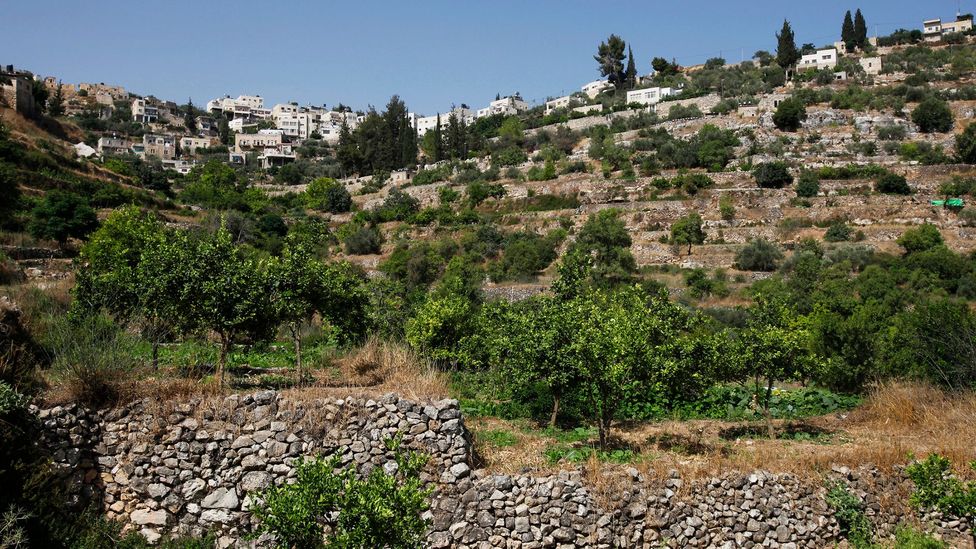 Sansour’s dedication stems from her love of people and stories. Taking the time to drink years’ worth of tea and coffee with people around her homeland, sitting with and listening to elders, is how she hears new names of generations-old produce and begins a mission to find a seed. It’s how she has found dozens of nearly lost fruits and vegetables, including the baladi white cucumber that she heard about from a man in his 80s when he reminisced about the cucumber’s scent, which he described as unlike any other variety.

Harvest time is often a whole-family experience, and many dishes have been created to be cooked at these particular times of year.  Harvesting an abundance of baladi bandora, for example, is traditionally celebrated by cooking galayet bandora: a spicy dish of baladi tomatoes fried with chillies, garlic and olive oil and served with flat bread. Heirloom yakteen gourds are often stuffed with rice, chickpeas and ground beef before being cooked in kishik, a tangy sauce made from dehydrated powdered yogurt and grains.

I didn’t set out thinking I was going to start a seed library; I was just longing for the things I love

Heirloom seeds, which are non-genetically modified and open pollinated, are important for the health of agriculture all over the world. Sansour believes they are especially important for Palestinians who have been living under Israeli occupation of the West Bank since 1967.  “With each seed we can achieve more autonomy,” she said.

Saving and reusing seeds year after year – as is possible with heirloom varieties – also offers an alternative to a global system that requires farmers to purchase new seeds every year. 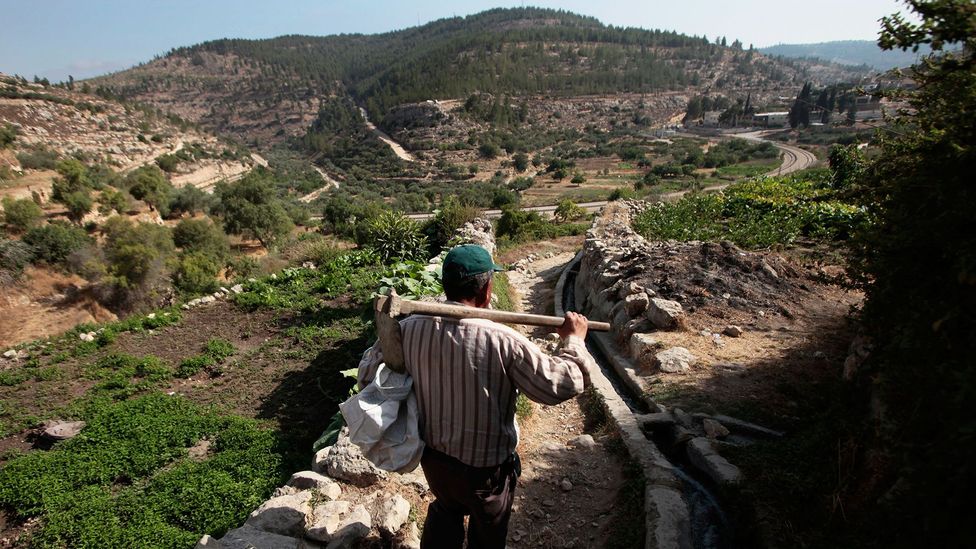 The village of Battir has been recognized by Unesco for its ancient agricultural terracing and irrigation systems (Credit: Eddie Gerald/Alamy)

The introduction of industrial methods in the 1960s turned sun-and-soil based agriculture into a system that required the use of pesticides and sterile seeds that could not be saved and used again. The diversity of heirloom seeds fell victim to the notion of progress, and the pride farmers had in their traditional knowledge of farming gradually diminished.

In the very north of the West Bank is the village of Al Jalamah. Here, Majid Abu Farha tends a farm filled with rows of heirloom watermelon, courgette, tomato, peas and squash. He’s been using natural baladi seeds for three years, ever since meeting Sansour through a friend and attending her workshops on seed saving. “We are proud to have our own seeds and for using our heritage, our grandfather’s seeds, because it’s something to safeguard our identity,” Abu Farha explained.

The land around Battir is part of the Fertile Crescent, along with modern day Iraq, Syria, Jordan and Lebanon. From this region, wheat was domesticated; some of the wheat Sansour and her community work with is approximately 10,000 years old, dating back to the beginning of agriculture. “The reason the English eat biscuits and everyone eats bread is because of our ancestors,” said Sansour.

Sansour’s library renews the cycle of these seeds being grown and saved. Planted once more, heirloom crops reestablish the ancient conversation with soil and environment that allows them to keep evolving, and to stay on the dinner table for generations to come. 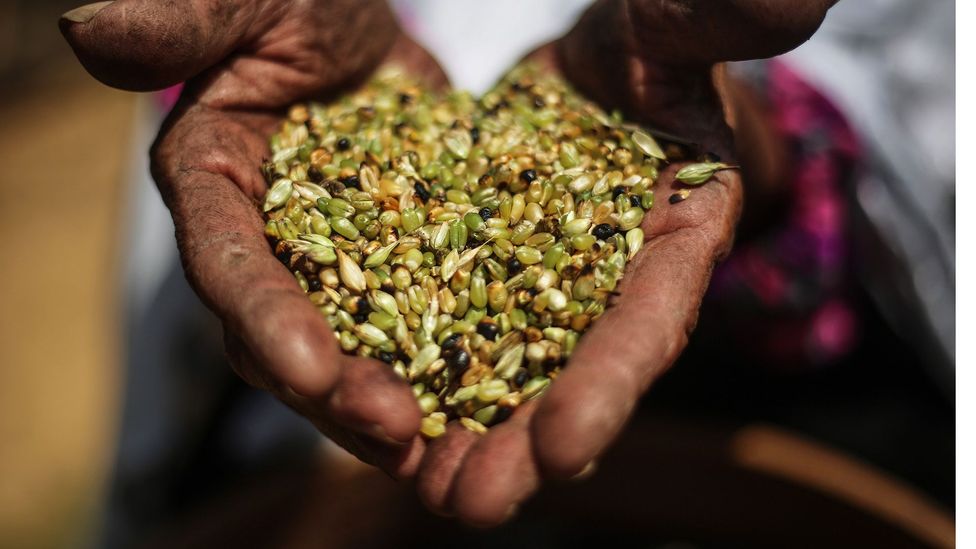 The land around Battir is part of the Fertile Crescent, along with modern day Iraq, Syria, Jordan and Lebanon. From this region, wheat was domesticated; some of the wheat Sansour and her community work with is approximately 10,000 years old, dating back to the beginning of agriculture. “The reason the English eat biscuits and everyone eats bread is because of our ancestors,” said Sansour.

Sansour’s library renews the cycle of these seeds being grown and saved. Planted once more, heirloom crops reestablish the ancient conversation with soil and environment that allows them to keep evolving, and to stay on the dinner table for generations to come.

The agro-ecological site—which includes the seed library and ancient terraces sown with heirloom seeds—that Sansour and her team have created in Dar Abu Hassan Guesthouse in Battir is a space for local farmers to visit, drink coffee and rekindle this valuable, traditional knowledge. Sansour says she has learnt everything she knows from the farmers.

“All I’ve done is say it’s okay to still love who we are… I’m just someone to be there to say I’m not going to stop loving and caring about the things that everyone tells me now is primitive and not needed,” explained Sansour. The seed library is not just about collecting heirloom seeds, but also about allowing people to be in tune with their roots and to love themselves again. 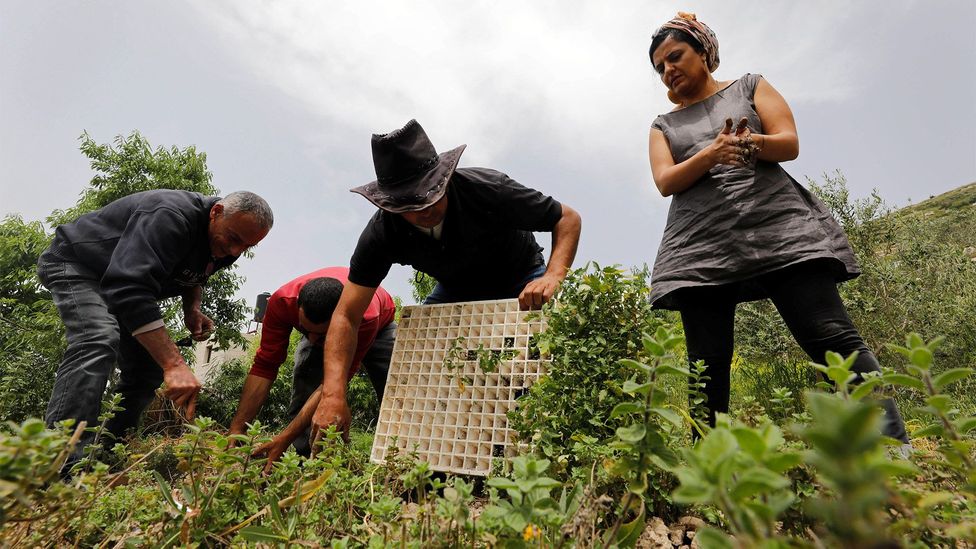 Sansour collects the seeds of Palestinian crops and shares them with farmers across the West Bank and with Palestinians in the diaspora (Credit: Abed Omar Qusini/Reuters/Alamy)

When farmers arrive to visit Sansour and her team, Fatima Muammar, who helps Sansour maintain the library and harvest seeds, welcomes them with tea made from freshly picked mint. Though born in Battir and constantly surrounded by agriculture, Muammar was never interested in farming until Sansour opened the library, which she said has brought her hope. “Sansour works with seeds we thought were finished, and every day I learn something new about my grandmother or about the land I grew up in,” said Muammar.

The entrance path to the agro-ecological site was recently planted with heirloom apples so visitors can smell the blossoms as they arrive. For months, Sansour and her team worked on rehabilitating the ancient terraces, gathering stones from the dirt and fitting them like puzzle pieces to form terraces that hold the soil, improve drainage and prevent erosion.

The project naturally became an intergenerational experience as local elders shared their knowledge with younger workers who had the muscles to move large stones. “It’s a brilliant ancient method; however, very few people now terrace, and those who know the art of terracing, their knowledge is also disappearing as they pass away,” said Sansour. 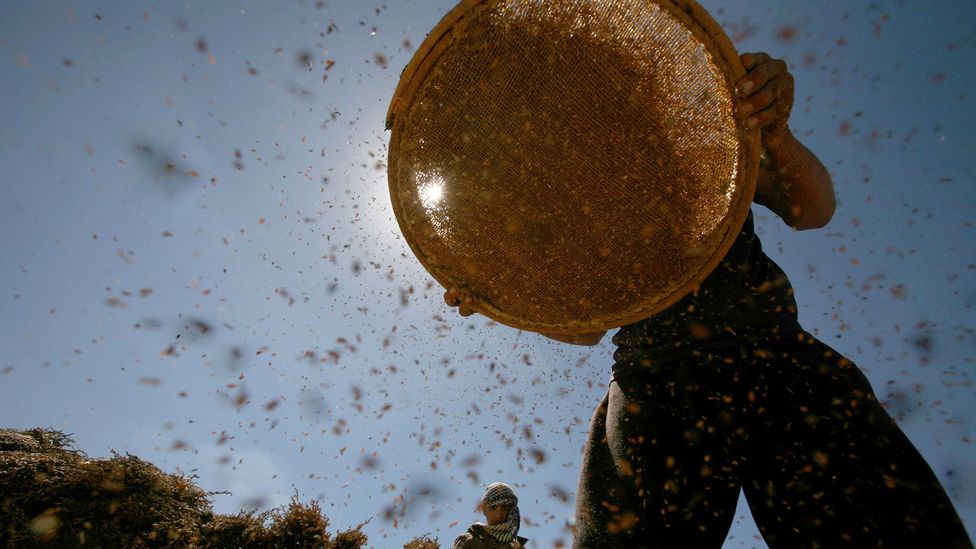 Sansour hopes to help preserve examples of traditionally farmed land so that future generations can have a reference point (Credit: SAIF DAHLAH/AFP/Getty Images)

Sansour knows she can’t completely transform local agricultural methods, but she hopes to help preserve at least some of this traditionally farmed land so that future generations can have a reference point to see what their bio heritage looks like and can work to keep it alive. “I hope we can continue to work this land, really our hands are on our hearts when we talk about it, and I’m pained because I’m worried,” said Sansour.

Seeds are not the only thing Sansour is saving. In order to preserve the Palestinian recipes that utilise heirloom food, Sansour created the Travelling Kitchen, built by hand from wood and able to be packed into in a car.

In one of her pop-up kitchen events, Sansour made riqaq o addas, a pasta-and-lentil dish topped with a sour sauce of foraged wild sumac berries. Sansour is also fond of the Battiri baitinjan, the eggplant from Battir, which she uses to make mutabal mahshi. To make this twist on the traditional mutabal, the eggplant is roasted over a hot flame until charred and then cut open in the centre to be stuffed with garlic and fresh herbs including zaatar, a wild herb from the thyme family, picked from the mountain. A mix of lemon juice and tahini made from sesame seeds traditionally grown in the north is drizzled over the top just before serving.

The Travelling Kitchen lets people come together to share and preserve stories. Elders who come along to share a meal often bring up the names of plants Sansour has never heard of. These interactions begin a new cycle of falling in love with a story – like she did with the nutty-flavoured Abu Samra (meaning “the dark and handsome one”) wheat  – and pursuing another lost heirloom variety, searching until she finds a last remaining seed to be planted once again, harvested and saved.