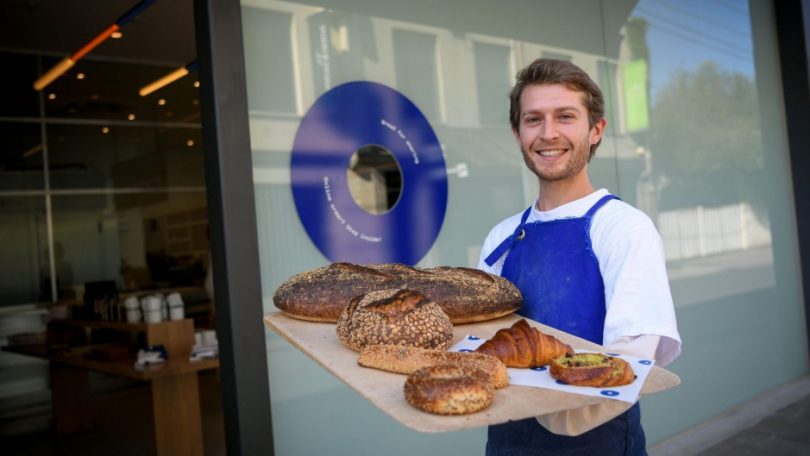 For now, the Prahran menu closely matches what’s on offer at the Caulfield flagship, but soon Twomey will begin flexing his muscles. So far, he has already won new fans with a cheese and Vegemite twist where the yeast spread is reduced then paired with smoked cheddar and parmesan, and new pizza flavours including rainbow chard drizzled with a soy-tahini sauce.

There are also plans for grab-and-go items that showcase small Victorian producers, from simple breakfast dishes with St David’s yoghurt to Yarra Valley caviar paired with baguettes or demi ficelles with vegetarian fillings.

The 90-square-metre Malvern Road shop features splashes of cobalt blue, distinctive light installations and a glazed front window punctuated by a playful peephole. When dine-in resumes, they’ll add a couple of high-top tables designed for those eating on the run.

The design is by Iva Foschia of IF Architects, also responsible for Attica, Cutler & Co and The Prince Dining Room.

“A lot of bakeries use a lot of wood and organic material,” says co-owner Mike Russell. “We went for something a lot cleaner and more pared-back. We make artisan bread and devote ourselves to long fermentation but at the same time we want to keep moving into the future.”

Out the back is where the Baker Bleu’s viennoiserie magic now happens. This pastry portion of the bakery’s production was shifted here from Caulfield to keep pace with the growing number of wholesale orders. Prahran marks Baker Blue’s second expansion in two years.

More Baker Bleu sites aren’t out of the question, but given this project took nearly nine months (with more than a few COVID-related hiccups), right now Russell is just happy for his team to settle into the neighbourhood.