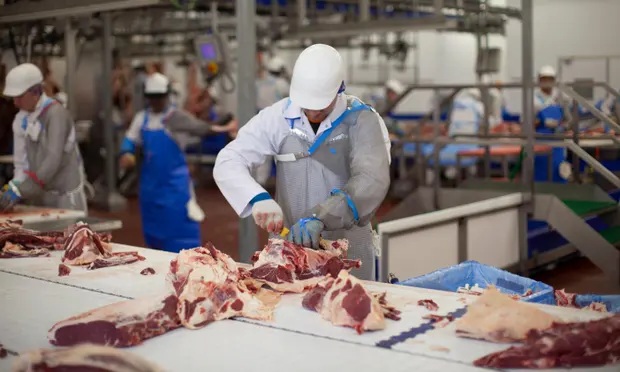 Desperate food manufacturers are pleading with the government to be able to call upon prisoners to solve a labour crisis blamed on the double blow of Brexit and Covid.

The Association of Independent Meat Suppliers, which represents butchers, abattoirs and processors, said it had a call set up with the Ministry of Justice on Monday that would explore how its members could recruit more current inmates and ex-offenders.

To fill vacancies companies are trying to draft in prisoners via a scheme that allows inmates to undertake paid work on day release. They are also contacting charities for ex-servicemen and women to try to drum up staff.

Tony Goodger of the meat suppliers’ association said some of its members already had inmates on the release on temporary licence programme working for them and found them to be an asset. It had also been in contact with the Career Transition Partnership, which helps former service personnel into work, and had been able to point some of them to members with job vacancies; however, the “numbers are low”, he said.

“Much of the food industry is facing a recruitment crisis,” said Goodger. “The advice we have received from the Home Office is that the UK’s domestic labour force should take priority. However hard we and many of the members have tried, staffing remains a challenge.”

Goodger said that last week he had contacted HMP Hollesley Bay in Suffolk, but the rehabilitation officer said there was such a big demand for inmates “we’ve reached our quota and we are not allowed to let any more out to go to work”.

The prisoner day-release scheme was curtailed during the pandemic but individual prisons have been reintroducing it in recent months.

The shortage of workers is not just in food production – a shortfall of about 90,000 HGV drivers is leading to gaps on supermarket shelves. In a letter to Kwasi Kwarteng, the business secretary, the British Retail Consortium (BRC) and freight trade group Logistics UK have warned that consumers will suffer unless the government intervened.

The worker shortage is having a knock-on effect on the hospitality trade, which is also struggling to recruit enough staff, and absences caused by Covid-19 or the need to isolate are adding to problems. Last week Nando’s had to close a 10th of its restaurants due to a shortage of chicken.

The British Poultry Council warned one in six jobs – nearly 7,000 roles – were unfilled as a result of EU workers returning home and that the situation could hit the supply of turkey this Christmas. The BMPA also has more than 10,000 vacancies to fill.

In the letter to the business secretary, first reported by the Sunday Times, the business groups warned that the shortage of HGV drivers is “placing increasingly unsustainable pressure on retailers and their supply chains”.

“The UK faces a shortfall of 90,000 HGV drivers and it is consumers who will ultimately suffer for this,” said BRC chief executive Helen Dickinson.

“So far, disruption has been minimal thanks to the incredible work by retailers and their suppliers. Retailers are increasing pay rates, offering bonuses and introducing new driver training schemes, as well as directly supporting their suppliers in the movement of goods, but government will need to play its part.”

They are asking the government to increase the number of HGV driving tests taking place and to provide temporary visas for EU drivers. David Wells, the chief executive of freight trade group Logistics UK, said it could not solve the problem on its own and said the situation is likely to become more acute in the runup to Christmas when retailers relied on “timely and plentiful deliveries”.

A Ministry of Justice spokesman said: “Helping prisoners find jobs during their sentence and after release makes it much less likely they will reoffend. We will support all industries with skills shortages where possible, and are working towards bringing levels [of release on temporary licence] back up towards pre-pandemic levels as restrictions allow.”