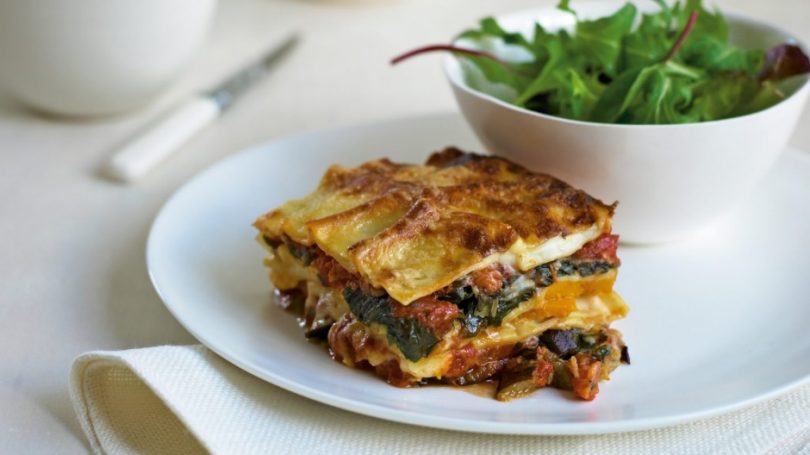 You don’t have to be a vegetarian to love this version of lasagne. The vegetable layers can be varied, depending on what is available. Use slices of sweet potato instead of pumpkin, a layer of sautéed mushrooms rather than spinach and leeks, or add pesto to the tomato sauce in place of fresh basil.

1. Preheat the oven to 200C. Place the eggplant on a baking tray and brush with 2 tablespoons oil. Season to taste. Roast for 30 minutes, turning once, or until lightly browned. Remove from oven and drain on paper towel.

2. Meanwhile, to make the cheese sauce, melt the butter in a medium saucepan, add the flour and stir over low heat until the mixture is dry and grainy. Gradually whisk in the milk and slowly bring to a simmer. Season to taste and simmer over low heat for 5 minutes, whisking occasionally, until thick. Remove from the heat and stir in the cheese. Cover with plastic wrap and allow to cool slightly.

3. Meanwhile, in a saucepan over medium heat, simmer the tomatoes and their juice, 2 tablespoons oil, garlic and sugar for 8-10 minutes, or until thick. Season to taste and stir in the basil.

4. Toss the spinach in a large frying pan over medium heat for 2-3 minutes, or until wilted. Drain. When cool enough to handle, squeeze out excess moisture, then chop. Heat the remaining oil in a saucepan and cook the leek over low heat until soft. Remove from the heat, stir in the spinach and season to taste. Reduce the oven temperature to 180C.

6. Place the dish on an oven tray and bake for 45 minutes, or until browned and bubbling. Let stand for 10 minutes, then serve with a rocket salad.