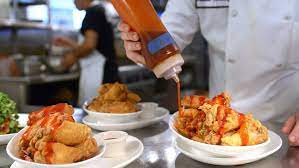 When one mentions Washington DC, to outsiders, a few predictable images come to mind: the White House; monuments and museums; endless bureaucracy; and the never-ending soap opera that is US politics.

What doesn’t often come up, however, is food. Philadelphia has its cheesesteaks. New York has its bagels, pizza and pastrami. Even nearby Maryland has its famous crab cakes. In the eyes of most, the US capital has never had a nationally or internationally recognisable culinary treasure to call its own.

I have no idea how I started eating it. It’s just a part of the culture

But for many true Washingtonians – not transplants in town for the politics – there is one notable exception: mambo sauce, a unique red-orange sweet and tangy condiment often used on everything from fried chicken and wings to shrimp and fried rice. While the origins of the word “mambo” have been lost to time, core ingredients usually include ketchup, soy sauce, vinegar, hot sauce, tomato sauce and sugar, with some versions also including pineapple juice.

Local foodies are incredibly protective of the sauce and its role in local culture. In 2018, for example, Mayor Muriel Bowser drew the ire of many constituents by saying she was “annoyed” at the sauce’s association with DC, a statement even the Washington Post characterised as “not a minor misstep”. On her personal Facebook page, Bowser, who took office in 2015, questioned why and how the condiment had become a “quintessential” DC food. Faced with an onslaught of criticism – some light-hearted, some not – the mayor’s spokesperson said Bowser “wanted to provide DC residents something to discuss on Thanksgiving”.

“I have no idea how I started eating it. It’s just a part of the culture,” explained Angela Byrd, a DC native who founded MadeInTheDMV, a think-tank aimed at promoting local brands and culture. “Everybody eats it. It’s weird when people don’t.”

The origins of mambo sauce are a matter of some dispute. Die-hard mambo aficionados insist the sauce was born at a Wings N’ Things, a black-owned and now defunct Washington wings restaurant even if a judge in 2013 ruled that “mumbo” – an alternative spelling – is legally trademarked in Chicago, where some claim the sauce was first created by an African American restauranteur named Argia B Collins in the 1950s at a BBQ venue he operated. Proponents of this theory – which is deeply unpopular among DC mambo sauce enthusiasts – believe the sauce was brought to the district by people travelling between what were two of the main hubs of black culture and business in the United States.

Over time, however, the sauce became a staple and a source of local pride in DC, where it has traditionally been associated with the city’s many affordable takeaway venues, particularly in historically African American parts of town such as Shaw or Anacostia. The growth of the sauce’s popularity in DC can partly be attributed to its connection to Go-Go music, DC’s homegrown variety of funk, as well as its availability near popular music venues and nightclubs over the last several decades.

Additionally, as the city’s demographics slowly changed over the years, the sauce was increasingly picked up and offered at higher-end venues such as The Hamilton restaurant near the White House, exposing new segments of the population – that were unlikely to be found eating at local takeaways (known locally as “carry-outs”) – to mambo.

Mambo sauce’s popularity, Byrd added, is largely a result of how useful it is. Even if the texture, colour and taste can vary from place-to-place – as it often does – it can be eaten at any time, with almost anything. “The redder, the better,” she said with a chuckle. “It’s almost like wine. It has different tastes. Even if the chicken is bad, it makes it taste good. You can use it on chicken and French fries, but some people go above and beyond with other great dishes. I’m going to carry mambo sauce with me, and that’s just the way it goes.”

These days, mambo sauce has gone mainstream. What was once quietly made in takeaway kitchens is now available on shelves in grocery and department stores, and even at more formal restaurants.

Among the local voices leading mambo sauce’s charge to greater popularity is Arsha Jones, the CEO and co-founder of Capital City Mambo Sauce.

A DC native, Jones began the business with her late husband after leaving the city for nearby suburbs and seeing a niche to market mambo to Washingtonians who’d left. These days, her sauce is available throughout the city and online to former city residents and out-of-town enthusiasts alike.

It has not always been an easy ride. For one, it was Jones and her company that were embroiled in the ‘mumbo vs mambo’ legal battle with rivals in Chicago.

Additionally, Jones says she sometimes still faces opposition from a small minority of mambo “purists” who don’t believe the sauce should be mass-produced or shared with out-of-towners. “People said that a more authentic version would be to go to a carry-out. But our recipe is based on what was sold at those carry-outs,” she said of the debate. “The goal is to commercialise a well-known product, not to change it or take away from its history, origination or the culture.”

“We actually want to highlight those things and make sure people understand where it started,” Jones added. “We want to show everyone what it is to be from Washington DC, and what we like.”

Visitors wanting to get a taste of that experience are not short on options, many of them in or around DC’s bustling 14th Street or U Street corridor.

The area, now home to a dizzying array of bars and restaurants – including many Ethiopian and West African stand-outs – holds a special place in the city’s rich African American history. Anchored by the famed Howard University, in the first half of the 20th Century the area was known as “Black Broadway”, a hub of music and culture at a particular time of racial and political tensions throughout the country.

“Between 1900 and 1920, it was the place to be. In the 1930s and ’40s, it was also unique in that it could be integrated. You’d also have white people who wanted to come enjoy black music,” said Lynn O’Connell, a tour guide with DC Metro Food Tours.

“After Howard University opened, you started seeing the intellectuals come in – the poets, the writers and, of course, the musicians. The area was home to a lot of blossoming black musicians.”

U Street is also home to what is without a doubt DC’s most famous restaurant: Ben’s Chili Bowl, which was founded by Trinidadian-born immigrant Ben Ali and his wife Virginia in 1958.

“I came in 1952, when DC was still a segregated city. When we met in 1957, we fell in love and wanted to be married. His dream was to open up a little restaurant,” the now 87-year-old Virginia Ali recalled. “He knew something of the restaurant business, and he had this little secret chili recipe.”

“That’s how we came up with the idea,” she added. “We just had to find that ideal location.”

Sixty-three years later, Ben’s is also widely considered the spiritual home of perhaps the only other food that DC residents claim as their own: the half-smoke, a hot dog-esque grilled sausage – sometimes half beef, half pork – served on a warm steamed bun with mustard, onions and more often than not, with Ben’s signature homemade chilli sauce (although mambo sauce is readily available on request).

Half-smokes are widely considered as important as mambo sauce

When it comes to DC’s indigenous culinary options, half-smokes are widely considered as important as mambo sauce, with the two being synonymous with DC’s culinary history and culture – particularly as it pertains to the city’s African American community – although many enthusiasts of either will tell you the two complement each other.

Over its more than six decades, the venue has become an almost obligatory stop for celebrities and prominent visitors of all stripes visiting the city. Many are featured on the building’s exterior murals or inside picture frames, from Anthony Bourdain and U2’s Bono to Barack Obama.

In the 1960s, famed American civil rights leader Martin Luther King Jr – whose “Poor People’s Campaign” had a nearby office – was a regular visitor. When he was assassinated in 1968, Ben’s famously continued to operate as a “safe space” even as devastating unrest left much of the area in ruins.

“We always wanted to be a community-based place, a home away from home for people and a gathering place. We do our best to treat all our guests as a family member walking through the door, whether it be the president or the guy on the corner. We’re all just people,” Ali said. “But more importantly, I think we’ve got great food.”

DC residents are quick to note that “great food” is increasingly becoming an important part of local identity at a time in which the city is rapidly changing.

For one, the demographics are shifting – DC’s sizeable black majority is now down to 45%. Secondly, calls for statehood are mounting, with an overwhelming majority of residents in favour of an upgrade from its current status as a federal district.

In this environment, many residents say that DC having its “own” food and local restaurants to identify with becomes increasingly important. Whether that food be mambo sauce or a half-smoke or both, however, is up for some debate.

“What we find is that local people, black and white, but particularly black, are really rallying around their local institutions,” explained Dr Bernard Demczuk, a professor and official resident historian at Ben’s Chili Bowl, complete with an “open table” permanently reserved at the restaurant.

“New York has the pizza. New Orleans has gumbo,” he added. “Hopefully our state cuisine will be the half-smoke.

Dr Demczuk’s comments beg a question that is sure to start a heated debate among DC food and culture connoisseurs: what is more DC, mambo sauce or a half-smoke?