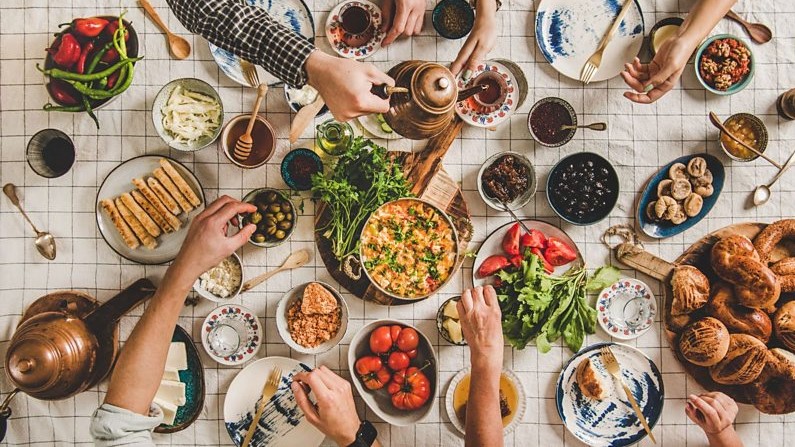 In the UK eggs for breakfast come in many forms, but in lots of Eastern Med countries the flavour combinations are taken to another level. Çilbir (Turkish eggs) is a luxurious dish of poached eggs served with yoghurt (often garlicky) and topped with melted butter and Aleppo pepper.

Fried eggs with sucuk (sucuklu yumurta) is another breakfast favourite in Turkey. Sucuk is a spicy, fermented sausage made of beef or lamb. Simply cook slices of it around the outside of a frying pan of simmering eggs and season with dried red chilli flakes.

Greek-Cypriot cook Georgina Hayden recommends strapatsada, a tomato and egg dish commonly served with feta and pitta bread, that is found in Cyprus and Greece. This dish is similar to Turkish menemen (scrambled eggs with tomato and peppers) and Middle Eastern shakshuka, which is eggs poached in tomato sauce with vegetables.Click or tap for a strapatsada recipe

Vary what you eat for breakfast

London-based chef with Syrian and Lebanese heritage Anissa Helou celebrates the “variety that many Eastern Mediterranean countries” have at breakfast. In some countries, including Turkey, breakfast can be a feast of seasonal and local foods, including cheeses, boiled or fried eggs, meats, yoghurt, breads, honey and preserves, according to Helou. It’s quick to put together as no prep is needed – you serve them as they are with a cup of black tea or coffee. You may also find olives, tomatoes, cucumber and fruits on the table, getting you on your way to five a day.

Hayden tops her Greek-Cypriot-style French toast with whatever fruit is in season. She names it tahinopita French toast, after a sesame-based bread you can buy in Cyprus, which she uses as inspiration for the dish. Her recipe includes tahini (a sesame seed paste), honey and sesame seeds, and she tops it with Greek-style yoghurt and honey as well as strawberries. It goes just as well with figs in the summer or pears in the autumn, she says. You can use similar ingredients and fruit to make tahini pancakes.

Forget baked beans, there’s a lot to learn from the Eastern Med about breakfast beans. “For many, it’s not the weekend if Friday and Saturday don’t start with the famous trio, falafel, hummus and foul”, says Sawsan Abu Farha, a Palestinian food blogger who grew up in Jordan.

Ful or foul medames is fava beans (broad beans) mashed with olive oil and cumin topped with various ingredients, commonly a sauce made from tomato, lemon, garlic and parsley. Originally from Egypt, it is also eaten in other Eastern Med countries and parts of the Middle East, North Africa and Western Asia.

Chickpeas are sometimes added to ful. Hummus and falafel are also made with chickpeas and eaten for breakfast. Keep a stash of hummus in the fridge – and falafel can be cooked from frozen so with a bit of prep it can be super-quick.

Try fatteh, a popular Eastern Med breakfast or snack made from torn, toasted or fried pitta, topped with different ingredients depending on the region, but they often include warm chickpeas, a cold tangy yoghurt and pine nuts. A delicious start to the day that’s sure to keep you full until lunch.

Treat yourself to a late breakfast

Some scientists say skipping breakfast or having it later could benefit your gut bacteria. In parts of the Eastern Med breakfast is either missed or eaten later. In Greece and Cyprus, “many people drink coffee in the morning and head to a bakery for an elevenses snack”, says Hayden.

Whether you’re heading to the bakery or cooking at home, why stick to sweet pastries? If you like to spend time on making brunch, there are lots of savoury pastries from the Eastern Med, like the Lebanese spinach ‘pie’ fatayer and the cheese-filled Cypriot flaounes.

Sandwiches are often eaten for lunch in the UK, but in some Eastern Med countries they are eaten for breakfast or brunch. Sabich, originally from Iraq but popular in Israel according to Helou, is a fried aubergine and boiled egg sandwich made from pitta or laffa bread. It’s a regular on the Israeli street-food scene, combining hot, salty, fried aubergine and cold salad with creamy, nutty hummus and zingy crunchy pickles. Prep the ingredients ahead of time and keep them in the fridge to have sabich for breakfast.

Make the most of pittas and flatbreads

For those with time to cook or a nearby deli, breads from the Eastern Med have a lot to offer. Sesame seeds and the spice mix zaatar are scattered on maneesh bread, Palestinian taboon bread and Turkish simit bread, which is shaped like a bagel. “In Lebanon, we often make the [maneesh] topping at home, take it to the bakery, [the baker cooks the bread with the topping] and we take it back home”, says Helou.

Flatbreads such as lahmacun, a thin round of dough topped with minced seasoned lamb, pide, a boat-shaped baked filled dough, and gözleme, a flatbread with various fillings usually including spinach and cheese, are regulars at the Turkish breakfast table. Pitta is also eaten throughout the Eastern Med to scoop up dips or for stuffing with the foods on offer.