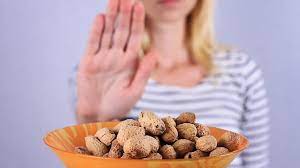 NHS figures reveal the number of people admitted to hospital as a result of allergies has more than doubled since 2013. There are estimated to be over 2 million people living with a diagnosed food allergy in the UK, according to the Food Standards Agency.

The rise in allergies over recent decades has been particularly noticeable in the West – England saw a 72 percent rise in the number of hospital admissions for children caused by anaphylaxis (an acute allergic reaction) between 2013 and 2019, from 1,015 to 1,746.

A food allergy is when the body’s immune system mistakenly treats proteins found in food as a threat. A severe reaction, known as anaphylaxis, can be life threatening. But it’s important to distinguish between allergies and intolerances, which are caused by difficulty digesting certain foods.

The increase in numbers is not simply because we’re more aware of allergies or getting better at diagnosing them, says Dr Alexandra Santos, Consultant in Paediatric Allergy. There are a number of high-profile theories about what’s behind this rise, ranging from lack of sunlight to dietary changes affecting our gut bacteria. While there’s no clear single reason for the increase, the cause is “most likely related to environmental factors and our lifestyle”, says Santos.

Avoiding well-known allergens early in life may increase the risk of developing an allergy, according to King’s College London’s LEAP (Learning Early About Peanut Allergy) study. It found “early childhood exposure to peanut decreases the risk of developing a peanut allergy”, and identified an 81 percent reduction in peanut allergy among five-year-old children who regularly ate peanut from the year they were born in comparison to those who did not.

The theory behind this finding is called ‘dual allergen exposure’. It identifies that even if children avoid eating allergens, they will still be exposed to them through dust, contact with furniture and possibly creams, and this can trigger an immune response. Where the “development of allergy antibodies takes place through the skin”, particularly through inflamed skin in babies with eczema, before it has been eaten or drunk, the immune system over-reacts to the food, explains Santos, who was involved in the LEAP study. It is suggested this is why infants with eczema are more likely to develop an allergy.

There is thought to be a “window of opportunity in the early years” to establish tolerance to potential allergens, as “the gut’s immune system is prepared to tolerate… foreign substances, such as food”, says Santos. The NHS website offers advice on introducing foods that can trigger allergic reactions to babies and toddlers.

Is improved hygiene to blame?

The ‘hygiene hypothesis’ suggests early childhood exposure to bacteria protects against the development of allergies. It proposes in modern society there is a reduced opportunity for cross-infection in households, as a result of reduced household size, improvements in household amenities, and higher standards of personal hygiene. Many scientists criticise this hypothesis, however, and experts agree good hygiene is important for guarding against disease.

A more recent version of the theory, the ‘old friends’ hypothesis, proposes the issue is not the cleanliness of your home, but whether your gut is encountering different types of microorganisms. Graham Rook, who developed the theory, suggests because we have a long evolutionary association with particular microorganisms, they are recognised by the immune system as harmless. But our gut microbiota are slowly changing due to our modern lifestyle, so we have fewer of the ‘old friend’ microbes that helped our immune system respond to foreign substances. There is evidence that taking antibiotics in childhood may increase your risk of food allergy, as they kill friendly gut bacteria as well as bad bacteria. “The microbiome in the gut will likely influence our ability to tolerate food or develop food allergy”, says Santos, particularly in early life.

A diverse diet from weaning onwards “has shown to be protective from development of food allergies”, as it helps develop beneficial gut bacteria, Santos adds. Read more about eating for a healthy gut on BBC Food.

Some research suggests a relationship between sun exposure when young and allergy risk.

An Australian and USA study examined the prevalence of anaphylaxis hospital admissions as well as epinephrine autoinjector prescriptions, most often used for the treatment of anaphylaxis, across the two countries. They observed lower rates in regions with more sunlight. A further study found Australian babies born in autumn and winter had higher rates of food allergy compared to those born in spring and summer. The researchers proposed the correlations could be due to vitamin D levels, a nutrient that is produced when skin is exposed to sunlight.

However, a German study found those with higher vitamin D rates at birth were more likely to develop a food allergy by three-years-old. “It may be a Goldilocks scenario”, Kari Nadeau writes in her book The End of Food Allergy, “both too little vitamin D and too much vitamin D are problematic”. Santos says, “we need more robust evidence” to assess the importance of vitamin D in allergy prevention.

In the UK we don’t get enough vitamin D between October and early March, so The Department of Health recommends many of us take a Vitamin D supplement during these months, or year-round for those who don’t go outside often. It also advises breastfed babies are given a vitamin D supplement from birth (infant formula is already fortified with vitamins) and all children from one to four years are given a daily supplement containing 10 micrograms of vitamin D. Read more about Vitamin D on BBC Food.

It isn’t only the rate of allergies that has increased, there has also been a gradual increase in the range foods people are allergic to. Santos suggests this could be due to an increased exposure to new foods, either because they’re being imported or through travel. “This happened a number years ago with kiwi”, she says, “it was not a fruit that was consumed in Europe, but then we started to see kiwi allergy” in the 1980s, after its introduction.

In theory, “we can be allergic to anything”, says Santos. However “eight groups of food constitute about 90 percent of food allergies”, she adds. The most common food allergies are cow’s milk, eggs, wheat, soya, peanuts, tree nuts, seeds and fish and shellfish.

The effect of allergies

Responses to allergies range from mild to severe anaphylaxis, which requires urgent medical attention and can be life threatening. There is currently no cure for food allergies, and managing the condition relies on avoiding the food and having an emergency treatment plan in the event of exposure. There are a number of tests for allergies, outlined on the NHS website. But allergies remain a worry and part of daily life for an increasing number of people.