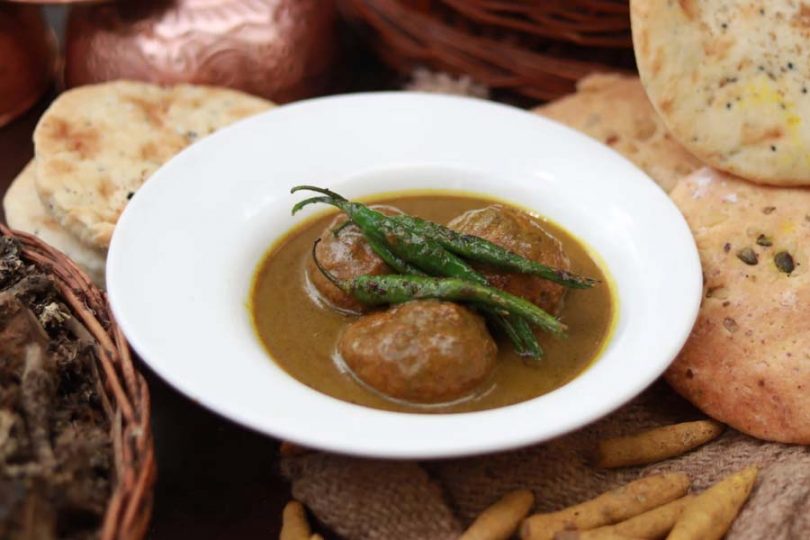 The dish is reminiscent of the all-so-familiar malai kofta (typically, paneer dumplings simmered in gravy), a staple at north Indian restaurants across India. Only, in Nayak’s modern culinary vocabulary, it had undergone a sassy metamorphosis oozing oomph. Closer home at Rooh in Delhi, chef Sujan Sarkar has used the creamy ricotta to give the humble bottle gourd kofta a luxuriant facelift. These koftas are served in makhni curry, along with potato chips. For non-vegetarians, there’s tandoori chicken koftas in pepper makhni masala, topped with a drizzle of chilli oil.

These modern versions of kofta are built on a long and vibrant tradition rich in flavours and textures, combined with unique culinary techniques and imagination. Most food historians concur that the Indian kofta or minced meatballs are of Turko-Persian lineage (dating back to the 11th century)—the word kofta is after all derived from Persian kufta, which means “to grind”. However, people on the subcontinent have perhaps known and relished meatballs of some kind for longer still. Sushruta Samhita, one of the foundational texts of Ayurveda, mentions cooked meat of various kinds that include ullupta mansam, or minced meat made into balls or cakes—quite like a kofta.

Gurugram-based food historian and author Salma Husain tells me about exquisite koftas made in the Mughal matbakh (kitchen)—meatballs stuffed with dried fruits like plums and apricot and simmered in fragrant gravies. There were koftas which were dyed with fresh extracts from vegetables like spinach and beetroot.

“The Awadhi kitchen, on the other hand, made the unique muallae ajam—massive koftas, each made in a pateeli (round-bottomed vessel), while in Kashmir, tamatar goli (meatballs cooked in tomato-based gravy) is perennial favourite ,” says Husain. Kashmiri cuisine, in fact, showcases several types of kofta: the rista (meat balls in red gravy); the torpedo shaped matsch; and the gushtaba, pounded meat koftas in yogurt gravy.

Chef Mohsin Qureshi who helms the kitchen at the Lebua Lucknow, Saraca Estate, talks about Lucknowi kofta made with a mix of minced meat and bone marrow, and fried in animal fat. “These kofte, intense in flavours, are best served with a rustic lahsun (garlic) ki chutney,” he adds. Qureshi’s personal rendition of mutton kofta, christened Roohani Kofta, come stuffed with a mix of curd cream, green chilies and deep-fried onion. The koftas are deep fried and cooked in a luscious gravy made with meat stock.

Lucknow is also famous for its melt-in-the-mouth Nargisi kofta—boiled eggs ensconced in delicately spiced mince, fried and simmered in gravy—evocative of the eponymous flower (Narcissus ).

“One of the most difficult koftas we have created at Indian Accent is a chicken Nargisi kofta with an oozy yolk centre,” says chef Manish Mehrotra, “But it was worth the toil,” he adds. Another time, Mehrotra reimagined the classic daal gosht in the form of a kofta. Koftas made with bhuna mutton came in a sauce made by cooking lentils in mutton stock to a silken finish. However, for his latest tasting menu at Indian Accent, Delhi, that launched yesterday, Mehrotra presented tamarind and butternut squash kofta served with a delicate coconut curry foam. Roasted pumpkin seeds give the melt-in-the-mouth koftas a nutty relief. On the menu, look for Pumpkin Bitterballen, Mustard, Coconut.

“The vegetarian koftas play a particularly important role on the modern Indian menu,” says Mehrotra. In Indian culinary tradition, vegetables are often relegated to side dishes. When it comes to serving vegetarian mains, koftas can match meat-based mains, in wholesomeness,” says Mehrotra.

“Koftas are also a great way to introduce seasonal vegetables to the menu,” says Mehrotra. He has dished out koftas made with jackfruit in summer, while his saffron-infused cauliflower koftas are the perfect winter treat.

Across the globe in London, chef Rohit Ghai, who is all set to launch his second restaurant Manthan at Mayfair London, added plantain kofta to the menu at Kutir, his chic Chelsea restaurant. Boiled plantains and potatoes are mashed with fried fenugreek, chopped ginger, green chilies, coriander stems and a hint of garam masala to make koftas that are served with a fried onion and cashew nut based korma sauce and wilted baby spinach. Ghai’s penchant for using unique ingredients in his food shines through in his jackfruit kofta flavoured with fresh white turmeric (also known as mango ginger for its raw mango like flavour) cardamom and mace powder. The koftas are served with fenugreek-flavoured vine tomato sauce.

A few years ago, Singh wowed his guests with his venison koftas perked up with sweet bursts of prunes and fresh zing of chillies and coriander leaves. “Restaurant kitchens are often left with considerable quantities of meat trimmings—fine bits of good-quality meat which would be a shame to waste. It can make great koftas,” says Singh. “Fish trimmings too could be made into koftas, I would serve them in a maccher jhol sauce,” he adds.

More recently, Singh has crafted a few recipes for vegetarian koftas. One of these includes sweet potatoes and pumpkin which are laced with achaar masala (or pickling spices) and roasted before being mashed up along with cooked quinoa, ginger, chillies, mint, roasted cumin, etc, shaped into balls, rolled in toasted quinoa, and fried to a visually dramatic finish. The koftas are served in a pool of tomato rasam (in a thicker consistency than regular rasam) flavoured with lime leaves and lemon grass. His spinach and apricot koftas, on the other hand, are served with a makhni-style sauce. However, personally, Singh has a soft spot for the good old malai kofta.

“But the malai kofta that most places serve nowadays are a far cry from the original recipe,” says Mehrotra, “that had no paneer in it,” he adds. So, at Comorin, Gurugram, Mehrotra serves up old-fashioned malai kofta made with khoya (milk solids), seasonal vegetables, dried fruits and nuts. We aren’t complaining.