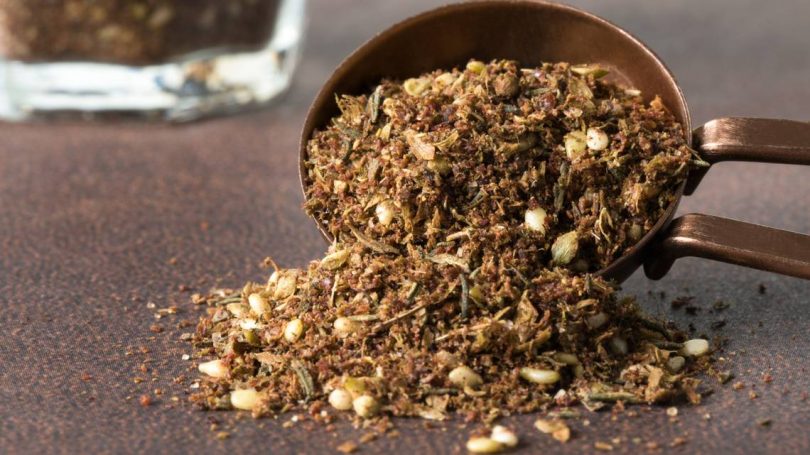 Usually this time of year the column includes “no oven” recipes. With the recent dip in temperature – thank you Mother Nature – we can actually think about turning the oven on and it won’t feel like a sauna. This week’s recipe is one my mom discovered recently from Martha Stewart: Pan-Roasted Chicken with Za’atar, Potatoes and Greens.

Za’atar is a spice blend you either really like, or you don’t. Remember when Piccadilly was open and they served fresh bread with oil and a shaker? In that shaker was za’atar. So what is za’atar? It’s a Middle Eastern spice mix usually made of dried oregano, thyme, and/or marjoram, with sumac and toasted sesame seeds according to Bon Appetit. The za’atar I prefer is made from thyme, sumac and sesame seeds and can be purchased at N&J Global Market.

The combo of za’atar on the chicken, potatoes and greens makes for a wonderfully tangy, woodsy flavored dish. Baked chicken is always delicious, but this recipe is something special. My mom made it with boneless skinless chicken thighs, so that would require less baking time, and she also skipped the potatoes. I love potatoes, so my vote is keep them in the dish.

If you’re looking to get something at a local restaurant with za’atar, Bagatelle Bakery, makes a wonderful wood-fired Za’atar Manoushi, which they describe as a specialty “pizza.” It’s served rolled up and it’s so delicious. Bella Luna also uses quite a bit of za’atar in their fabulous fattoush salad, so if you like that, you’ll like this week’s recipe.

1 lemon, cut in half

Preheat oven to 425 degrees, with racks in upper and lower thirds. In a small bowl, mix za’atar with 2 tablespoons oil and 2 teaspoons salt.

With a sharp knife, cut two, 1-inch-long slashes in each piece of chicken, through the skin and down to the bone. Rub za’atar mixture all over chicken and into slashes.

On a rimmed baking sheet, toss potatoes with 1 tablespoon oil; season with salt and pepper. Roast in lower third of oven, stirring once, until starting to brown, about 20 minutes. Toss onion with remaining 1 tablespoon oil; season with salt and pepper; add to baking sheet along with chicken pieces and lemon halves. Roast until a thermometer inserted into the thickest parts of chicken (not touching bones) registers about 150 degrees, 25 to 30 minutes.

Switch oven to broiler setting. Move baking sheet to upper third of oven; broil until chicken is browned, 2 to 3 minutes. Drizzle kale lightly with oil; season with salt and pepper. Scatter kale over chicken and broil until just wilted and thermometer inserted into thickest parts of chicken registers 165 degrees, 1 to 2 minutes more. Let cool slightly, then squeeze lemon halves over chicken. Remove chicken to a platter; toss vegetables together and serve alongside.