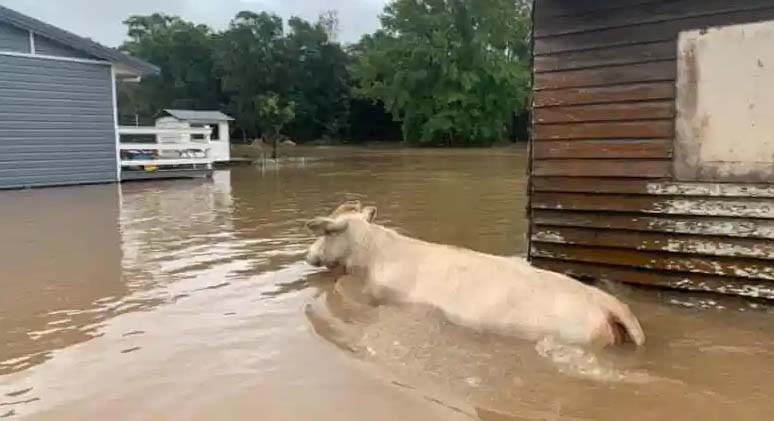 The floods come less than 18 months after Australia was gripped by a bushfire crisis, with many of the same towns impacted.

Some 10 million Australians remain under a weather warning on Monday night as a group of colliding weather systems cause flooding chaos across swathes of New South Wales, leading to dozens of communities being declared disaster zones and forcing more than 18,000 people to evacuate from their homes.

More than 800mm of rain has fallen in less than a week in some parts of the Australian state, leaving a trail of destruction which stretched from the densely populated suburbs of western Sydney to the sleepy coastal towns of Taree and Kempsey, hundreds of kilometres away on the NSW mid-north coast.

As night fell on Monday, authorities in the state issued a flurry of new flood and evacuation warnings, as rivers west of Sydney rose faster than expected, emphasising the danger had far from passed.

The NSW premier, Gladys Berejiklian, described it as a “miracle” that no lives had been lost, but with another 50-100mm expected to fall across pasts of the east coast again on Tuesday, and river levels still rising, thousands of Australians remained on high-alert.

The extent of the deluge shocked experts. Justin Robinson, a flooding forecaster for the Bureau of Meteorology, Australia’s weather agency, said it was the “worst flooding that I have experienced and I have had to forecast” in 20 years in the job. Berejiklian said the floods were “an event which far exceeds what has occurred in the past 50 or 60 years”.

The floods come less than 18 months after Australia was gripped by a bushfire crisis which saw towns levelled and dozens killed. Many of the places which have found themselves inundated by a record downfall were still recovering from that disaster.

“I don’t know any time in the state’s history where we have had these extreme weather conditions in such quick succession [and] in the middle of a pandemic.”

In the town of Windsor, which sits on the banks of the Hawkesbury River on Sydney’s north-west fringe, volunteers filled sandbags for nervous residents hoping to protect their homes.

One of them, Alistair Dent, a Windsor local, said the men – who were mostly members of a local church – had stayed up throughout the night on Sunday and into Monday morning handing out some 150 tonnes of sand.

“I had a lady crying on my shoulder yesterday afternoon. I think people are quite worried,” he said.

In nearby Pitt Town, Aaron Schultz pointed out the places where his shed, stables and water tank used to be, while he prepared his property before evacuating. All of it had been submerged by Monday afternoon, and the speed at which the water rose during the day had convinced him he needed to leave.

He still did not know where he would be staying on Monday night, after the friend he had hoped to stay with was also forced to evacuate. “Somewhere far away from here,” he said.

The bulk of the flooding had taken place in two parts of the state – both the outer western suburbs of Sydney and the regional mid-north coastal areas around Taree and Kempsey.

Berejiklian on Monday told reporters that some 15,000 mid-north coast residents had been evacuated, along with around 3,000 residents from western Sydney’s Nepean-Hawkesbury region.

“I am so relieved [that] until this point in time no one has lost their lives, which is a miracle given what we have been through, and we really want to maintain that,” the premier said.

The NSW State Emergency Service had received some 8,000 calls for help by the mid-afternoon, including an elderly woman with a broken hip in the town of Kempsey. In the north coast town of Telegraph Point, Megan Nourse said a flash downpour had flooded her home in 10 minutes, forcing her to swim through her own living room trying to find her son and daughter.

“We had to swim under the door frame. My son got the canoe out … we swam out there and he canoed us out, and then he was canoeing back to our top-story lounge room and windows to get our dogs out,” she said.

Still, some had remained optimistic. Kate Fotheringham, from the state’s mid-north coast, was almost forced to delay her wedding after the venue was flooded. Instead, she was helicoptered into the site and posted a photo on social media with her new husband surrounded by floodwaters.

By Monday afternoon, evacuation orders had been issued for large chunks of western Sydney, though earlier warnings for major townships such as Penrith had been revoked. Flooding had occurred after Warragamba Dam, Sydney’s main water supply, spilled over on Sunday afternoon.