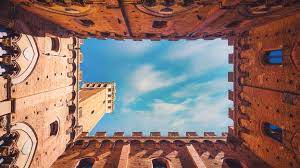 For centuries, church bells have rung over the rooftops of cities around the world, their clanging such a constant part of life that residents may pay them little mind. But to Spanish musicologist Llorenc Barber, each bell tower is simply a player in a vast, untapped orchestra.

For the past four decades, he has travelled throughout the globe, turning the single tone of each bell into an elaborate symphony played from church towers across a given city. To date, Barber and his wife, fellow musicologist Montserrat Palacios, have composed and performed bell tower concerts in more than 100 cities, including in London, Paris, Rome, Mexico City and Buenos Aires.

Since every city is different, no two compositions are the same. The duo composes their bell ballads based on the towers’ position to one another and the tone of the bells themselves. In order to conduct these citywide concerts, Barber and Palacios recruit volunteers from each location to operate as many as 20 belltowers. After finding enough bellringers – in some cities, as many as 100 people are needed – they then train them in reading music and how to properly ring each bell.

According to Barber, by allowing citizens to play the bells of their own cities, they’re able to experience their city’s distinct urban soundtrack in a new way while also reclaiming a unique piece of its cultural heritage.