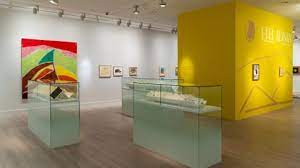 ISTANBUL: Etel Adnan, the daughter of a Turkish officer and an Ottoman Greek mother, born in Lebanon with roots in Turkey, France and the US, has a colourful and thorough retrospective at Istanbul’s Pera Museum, called ‘Impossible Homecoming.’

“Turkey has been the background of my everyday life. I spoke Turkish and French as a child, and then, because of the school, French took over. But in every visit to my family in Damascus, with my father, Turkish returned. We often saw ourselves as an Ottoman family, as my father was a General Staff Officer graduating from Harbiye, with Mustafa Kemal as a classmate. The only time I saw my father crying was at the death of Ataturk,” Adnan writes in Paris in December 2020, printed in the preface of the book accompanying the current exhibition at Istanbul’s Pera Museum.

“Shortly before the First World War, my father was named Governor of Smyrna [current-day Izmir]. This is where he met and married my mother, a young Greek born there. It was a quite uncommon marriage as he was a Muslim and she was a Christian. He already had a first wife and three children in Damascus, the city where he was born,” she continues.

Co-curator Serhan Ada writes: “She begins all her interviews by mentioning her roots. ‘My mother was a Greek from Smyrna –Greek Orthodox. My father was a General Staff officer in the Ottoman Empire, born in Damascus.’ They were children of the same empire; an empire that had collapsed but was not yet officially dissolved. Lavish roots, fit for sprouting…”

Adnan, now 96 years old, has been active in the arts scene for over six decades. She is a poet, a visual artist, an essayist who lives in Paris, France, after having spent a significant portion of her lifetime in the US and Lebanon.

Etel Adnan is the subject of a retrospective, called Impossible Homecoming, at Istanbul’s Pera Museum, taking over the third-floor gallery space. Her paintings are bold, colourful, deceptively naive even.

In the foreword of the book accompanying the exhibition, Inan and Ipek Kirac describe the effects of her paintings as such: “We are convinced that the colours, the exquisite imagery, the simplicity, and the impressive energy of these works will open up an area for profound discovery and interpretation for the audience, taking them on a unique journey through Etel Adnan’s multi-faceted, multi-faith, multicultural, multicoloured cosmos that embraces all differences.”

Adnan was born in Beirut in 1925, after her parents had left Izmir (Smyrna) during the Turkish War of Independence. She spoke Greek and Turkish thanks to her parents, while she received an education in French convent schools.

She lost her father while she was a young girl, in 1947, co-curator Serhan Ada writes, and worked her way through school. She was interested in literature and poetry in French, which eventually led to a scholarship to France, to Sorbonne University. “She didn’t stop there, she studied philosophy, started her PhD, went to Berkeley, to Harvard, one thing led to the next and by the time she was thirty she had become an American. Not only was she both teaching and writing, but this young lady whose mother once thought her not skilled enough, was also painting. Had she become American?” Ada asks.

Ada explains that Adnan suddenly decided to return to Lebanon, “an exile from an exile” in her own words. “War was looming on the horizon of the country she had left decades earlier. The war hadn’t ended yet when she left Beirut and returned again into voluntary exile to California.”

In addition to writing poetry, Etel Adnan had also started painting, and making leporellos (books folded accordion-style with illustrations and text). Her paintings and her leporellos, as well as her ceramic works and tapestries are on display at the exhibition at Pera Museum.

The Pera Museum in Istanbul’s Beyoglu district, on Mesrutiyet Caddesi,  is open to visitors from Tuesday to Saturday, 11 am to 6 pm. Because of lockdown measures, it is closed on Sundays, and as a general rule, on Mondays. On Wednesdays students can visit the museum for free. Etel Adnan’s Impossible Homecoming exhibit runs through August 8, 2021.