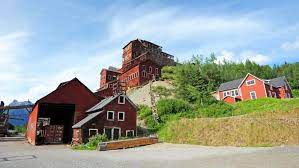 Crimson paint faded by a century of unrelenting Alaskan winters, the remains of Kennecott rise from the wilderness, an anomaly of right angles against the jagged mountain landscape of Wrangell – St Elias National Park. This early 20th-Century copper mining town once provided comfort and community to hundreds of residents. Abandoned, reclaimed and now preserved, Kennecott is the ghost town that helped electrify the US.

In the 1900s, prospectors searching along the eastern edge of the Kennicott Glacier came upon massive green cliffs of copper. Demand for copper wiring was skyrocketing as large-scale electrification efforts swept the United States, and scions including J P Morgan and the Guggenheim family saw opportunity. They formed the Alaska Syndicate, intent on accessing the mineral riches of the Alaskan wilderness.

By 1911, a railroad had been developed across inhospitable terrain, and the Kennecott mine and mill were complete. At its peak, Kennecott employed 600 people. The work was gruelling – the temperature in the mines hovered around freezing and the hours were long. But according to current local resident Kelly Bay, the community thrived. “They had big social events and ice skating in winter,” he said. The company town included a hospital, a school, recreation facilities, a general store and even a dairy. http://emp.bbc.com/emp/SMPj/2.43.0/iframe.html

The mine closed in 1938 after the ore deposits were depleted and global copper prices dropped. The abandoned town began its return to wilderness once more, the buildings slowly crumbling. But in the mid-1970s, people seeking a “hippie” lifestyle began slowly resettling the remains of the town. According to writer and historian Ronald N Simpson, Kennecott became a place to escape to. “There was no work out there or anything, but if people wanted a remote existence, they got one out there,” he said.

In 1978, Kennecott was listed on the US National Register of Historic Places, and was designated a National Historic Landmark in 1986. In 1998, the US National Park Service acquired many of the buildings and much of the land and began restoring the site. Today, summer visitors make the seven-hour drive east from Anchorage to stroll the streets of Kennecott, imagining anew the challenges of life at the edge of the world.