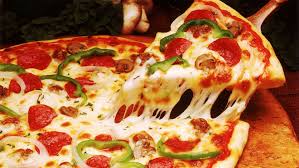 Breaking news: making homemade pizza is easy! And with the time fast approaching when we can have friends over in the garden, it’s the perfect food to serve.

This week, Welsh chefs Jez Harry and Ieuan Phillips have been seen travelling across Italy to find out how great pizza is made – and to compete in the Pizza World Championships in Naples – on BBC Two in Pizza Boys. On the way they met inspirational pizza makers (‘pizzaiolos’). We’ve got together with them to bring you pizza-making tips.

Pizza-making in Naples received UNESCO recognition in 2017 as an ‘intangible cultural heritage item’. Now, we’re not expecting your kitchen to qualify for this status, but you can definitely make a tasty take on a classic Neapolitan pizza at home.

The two original pizzas of Naples both have a tomato base: the Margherita, which is also topped with basil and mozzarella (reflecting the colours of the Italian flag), and the Marinara, which has garlic, oregano and olive oil added to the tomato.

This is where things get tricky. A Neapolitan pizza should be cooked at 430-480C in a wood-fire oven (and topped with hand-crushed tomatoes). “There aren’t many bad pizzas in Naples”, says Ieuan. But you can still make a good pizza without a pizza oven.

We recommend you turn your oven up as high as it will go. You can use a pizza stone in a conventional oven – its ceramic material retains the heat, giving a crisper bottom. Preheat the stone in the oven before putting the pizza base on it and then topping and baking. If you only have a baking tray, preheat it before putting the dough on it, then add the toppings.

Ieuan suggests an alternative method of cooking your pizza base, by starting it in an ovenproof frying pan. Once it’s cooked on the hob on each side for a couple of minutes, you can transfer it to a preheated baking tray or leave it in the pan, then add your toppings and cook in a hot oven.

The base is half the pizza, so it’s got to be good. Pizza enthusiasts might tell you to leave it to rise for 24 hours to develop a complex flavour, and it certainly makes a difference, but at BBC Food we reckon a 2-hour rest, or 12 hours in the fridge, is enough to give it a flavour boost. Cover it with cling film and, if you’ve refrigerated it, let it come to room temperature for 2 hours before using.

The Italians use strong 00 flour (the finest texture, perfect for fresh pasta and pizza, and sometimes called pasta flour). But it’s difficult to know the strength of your 00 here, so at BBC Food we often mix strong white bread flour and 00 flour for a soft but sturdy base. Jez says a local flour in Wales makes great dough – though he adds it’s important the protein content is high, making the dough stretchier, and he chooses flour ground to ‘00’.

Neapolitan pizzas have a plump border and the dough is made from four ingredients: flour, yeast (or sourdough starter), water and salt. The Romans add olive oil to their pizza dough – the pizza has a thin and crisp-edged base and can be cooked on a rectangular tray in the oven. A Roman pizza ‘taglio’, aka pizza by the slice, is ideal for a low-effort, traybake dinner, or as a snack when watching sports at home with friends, according to Jez.

Sicilian pizza has a thick, yet light and spongy base, and is cooked in a tray in a standard kitchen oven, just like focaccia. Authentic toppings include onions, tomatoes, anchovies, oregano, sheep’s milk cheese and breadcrumbs, but you’ll find variations around the world. The dough doesn’t even require much kneading!

For portable pizzas, look no further than a calzone stuffed with your favourite pizza fillings.

4. You can adapt your pizza depending on what you have

“Pizza toppings differ throughout Italy, depending on what is in the local area”, says Ieuan, adding some “famous restaurants, such as Franco Pepe’s outside of Naples, use ingredients [sourced from] within a 2-kilometre radius”.

The Welsh boys seek local ingredients for some of their own pizzas, such as their creation for the London Pizza Festival, which uses Abergavenny goat’s cheese, raw Welsh honey, sage, basil and sobrasada (a cured sausage). “Take the Italian ethos of local is best and see what’s near you”, says Ieuan.

There’s no need to be purist about toppings, says Jez. Adapt your pizza according to what you have. “People expect a Marinara to have seafood on it”, he says, but tradition suggests “it’s the pizza sailors ate”, explaining that there’s no cheese because it would have been expensive and has a short shelf-life, so was unsuitable for voyages.

The same applies to kit. Jez says Detroit pizza in the USA (similar to the Sicilian-style) was first cooked in trays from automotive suppliers, a renowned Detroit industry, as suitable trays weren’t avaliable to buy at the time.

If you’re not sure where to start with local ingredients, you’ll find recipes for familiar pizzas, such as pizza ai quattro formaggi (four cheese pizza), and the non-Italian but popular Hawaiian pizza, on BBC Food.Pizza recipes on BBC Food

Pizza-making at home “can be a real family affair, with different toppings for different people”, says Jez. Keep it simple with a Margherita, pile on the toppings, make your slices vegetarian, vegan or “even put pineapple on it, if you want to”, he says. His favourite is pairing sweeter and salty flavours together. Mini pizzas work well for personalised meals.Four cheese pizza

Sweet pizza can split opinion, but “like many things, when it’s done right, it’s amazing”, says Ieuan. His top tip is “not to overdo it”, for instance to avoid a result that looks like you’ve put pizza dough “under a chocolate fountain and then piled on the strawberries and marshmallows”. A touch of icing sugar in the dough sweetens the base slightly to complement your chosen toppings, which could include sweetened mascarpone, hazelnuts and fruits. If you want to go all out, pizza fritta (deep-fried pizza dough from Naples) is a great way to make a savoury favourite into a sweet dish, with a sprinkling of icing sugar or stuffed with ingredients. Think doughnuts, but pizza-style!