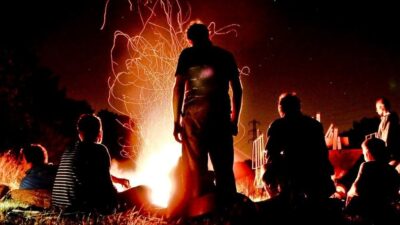 In the ‘Digital Church’ in West Germany, programmers code under the pulpit. The spirit of tech startups is meant to drive digitalization. However, even divine intervention might not solve their biggest challenges.

The altar of the former St. Elisabeth Church has been supplanted by an espresso bar. One of the aisles is now called Idea Room. The light percolates through stained glass windows, illuminating a foosball table. In the Digital Church in Aachen, worlds collide: High-speed internet is running through old brick walls, digital startups are standing up to German risk aversion.

In 2017, digitalHub, an association from Aachen,bought the desecrated church and transformed it into a digitalization center. It is one of a few such centers funded by the German state of North Rhine-Westphalia. In the Digital Church, the association supports tech startups in a bid to make Germany ready for the future. The digitalization of Germany’s economy remains on shaky grounds: Startup founders still stumble over a lack of capital and cultural fear of failure.

Conjuring up the spirit of digitalization

Germany is lagging behind its peers in its digitalization efforts. “The US and China are digitizing with the speed of a car driving 100 kilomters per hour [62 miles per hour]. We are dragging behind with 10 kph,” Oliver Grün, the chairman of digitalHub, told DW.

In the Digital Competitiveness Ranking of the IMD Business School in Lausanne, Switzerland, Germany has been losing ground. In the 2020 report, Germany was placed 18th among 63 countries. Five years ago, the country still came in 15th.

Despite the country’s weak global standing, German startups could actually be playing a major role in the digital sector, said Grün, who also heads the Federal Association of IT Small- and Medium-Sized Enterprises (SMEs). “In Germany in general, and particularly in Aachen, we have people with deep tech know-how. With our engineering capabilities, we can develop great products,” he said. Aachen is home to the RWTH, Germany’s biggest technical university and one of the most renowned in Europe.

The long table in the nave serves as a meeting point. Here, established SMEs and startup founders explore possibilities for cooperation. “The Digital Church played a decisive role for us because we met our first business partners here,” said Tim Host, CEO and co-founder of Aachen-based startup EMSU, a developer of smart shelves. According to Host, the grand building adds more credibility when meeting business partners, compared with a cramped office.

The first partnership to walk down the aisle here was between the mobility startup MOQO and a regional car dealer. The rental cars of the dealership can now be booked and opened using a smartphone.

The association also supports startups in raising capital. However, securing financing for particularly successful young businesses has proven difficult in Germany. German venture capital funds are eager to invest during early funding rounds but tend to stay away during later stages. “As soon as startups require financial injections in the two-to three-digit million range, they are acquired by larger businesses,” Grün said.

According to a report by the Deutsche Börse Venture Network, a subsidiary of Frankfurt Stock Exchange operator Deutsche Börse Group, only 12% of capital raised for startups in Germany, Switzerland and Austria during later funding rounds comes from within these countries. By comparison, almost half of the funding during these later rounds stems from the US and Canada.

“The startups then just go abroad,” Grün said. With many businesses eventually moving to countries such as the US and China, Germany is losing valuable firms which initiatives such as the Digital Church helped grow.

The power of confessing failures

Creative ideas, the courage to take risks and allowing for possible failure are three essential characteristics of founders. But these qualities are seldom promoted in Germany. “The problem is that, instead of seeing opportunities, most people see cause for concern,” said Grün. According to startup founder Host, failure is seen as a taboo: “Most founders don’t publicly talk about things that didn’t go as planned.”

To break the taboo, the Digital Church organizes public confessionals, so-called F***-up Stories. During these virtual events, founders share their stories of past failures. The aim is to establish a culture that is more tolerant of mistakes; one in which success is not equated with perfection but measured in experiences and results.

Host has also sat in the confessional chair during a F***-up Stories event. His first startup did not work out. Instead of keeping quiet, he shared his past mistakes with a large audience. “If you are made aware that someone failed at a particular hurdle, you can minimize the chances of failing at it yourself,” he said.

A constant mumbling fills the space beneath the high ceilings of the former church. At an office desk below the pulpit, a young man is coding intently. In one of the aisles, three founders are tinkering with a formula. Inside these old walls, there is no sense of self-doubt. The real challenge awaits outside.