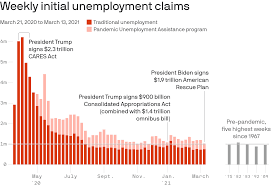 Why it matters: Despite more than $5 trillion in dedicated government spending and $3 trillion added to the Federal Reserve’s balance sheet, for a full calendar year now at least 1 million people have submitted applications for traditional or pandemic-based unemployment benefits every single week.

What it means: Including the global financial crisis, the 1973 oil crisis, the dot-com bubble burst and every other recession since 1967, only one week prior to the pandemic — the week ending Jan. 9, 1982 — now registers on the list of top 50 worst weeks for U.S. job losses, and it ranks 49th.

For many weeks during the pandemic, initial jobless claims totaled more than twice what they did during the worst week of the Great Recession.

Yes, but: Excluding applications for the Pandemic Unemployment Assistance program, numbers have been below 1 million since August, with the exception of one week in late January.

Yes, but, but: PUA is not the first recession-era jobless program. Following the Great Recession in 2008, Congress created similar programs through the Workforce Investment Act.

By the numbers: In 52 weeks, there have been more than 81 million first-time filings for jobless benefits.

There were 18.2 million people receiving some form of unemployment assistance in the U.S. as of Feb. 27.

A year prior, there were 2 million.

“This is evidence of the long-term scarring in the labor sector that, despite what is going to be a booming economy over the next two to three years, will not be repaired anytime soon and requires sustained policy attention,” Joe Brusuelas, chief economist at tax advisory firm RSM, said in a note to clients.

On the bright side: “[A]s businesses reopen and vaccinations continue at an accelerating rate, we can expect steep drops in claims this spring,” Frick said.