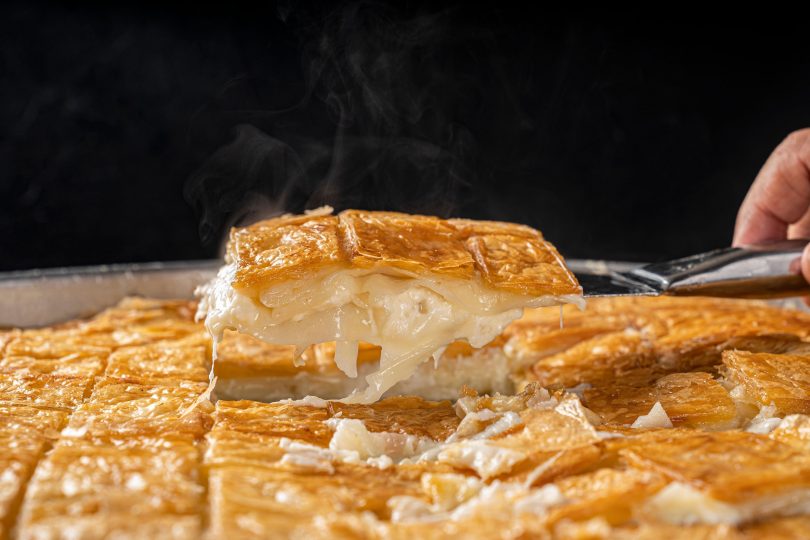 ISTANBUL : Börek, generally prepared using paper-thin dough, is a staple in Turkish cuisine. Let’s learn about the various types of this crunchy stuffed pastry, both savory and sweet

From breakfast to tea time, as a side or main dish, börek can be found pretty much everywhere in Turkish cuisine. And I mean, can you blame them? Made out of thin layers of yufka and stuffed to one’s desire, börek can be prepared in a variety of ways – and when I say variety, I mean there are tons of different options to choose from. Today we’ll have a look at just a few favorites.

Yufka is essentially phyllo pastry, but I prefer to call it by its Turkish name because we are talking about Turkish cuisine here. You can buy them at pretty much every supermarket but personally speaking, I’d stay away from ready-made yufka. They are usually a bit tougher and don’t make for the best börek unless you’re aiming to make a simple stovetop börek.

There are many specialty shops called “yufkacı” that sell them fresh, usually daily. It is a bit more expensive than the supermarket kind, but when you find the right shop you can make delicacies without breaking a sweat about tearing them.

Last but not least: You can make your own yufka. It is a simple dough usually made with flour, water and salt, but getting it thin enough requires a bit of mastery. But that’s nothing you can’t handle! Besides, even if the layers get a bit thicker than intended, your fresh homemade yufka will taste a great deal better than anything else. Being made with love certainly makes a difference in taste!

Tepsi böreği and its different versions

Tepsi böreği is a kind of börek made in a baking tin. To make it, layer your yufka, spread the filling, more layers of yufka and some more filling. Close off with another piece or two of yufka and call it a day. That is the basic process for making all different kinds of tepsi böreği. The differences start with their fillings. Feta cheese with parsley is a favorite and so is minced beef, with onions, garlic and other herbs to make it more interesting. Many like to have their börek with potatoes as well, and do not get me started on all the kinds that feature vegetables! Spinach is a favorite in that department, commonly seen in many a pastry shop. But you might wonder why they don’t exactly taste the same and not even the consistency seems similar. This is because there are two parts of börek that are key: Fat and moisture. While butter gives a very rich flavor, commercially sold börek usually is not made with butter but rather with vegetable oil.

And moisture is super important as well! Each layer gets sprinkled with a mixture of fat and either milk or water. Börek made with water gets more crunchy while börek made with milk is on the softer side.

One kind of börek made in a tin is kol böreği, literally meaning “arm börek.” The reason for that is simple: it is a long stretch of börek rolled together, each long piece like an arm. Instead of layering the yufka and adding the filling in between, the stuffing is spread in a line on a piece of yufka that is then rolled lengthwise. It is then put right onto the tin in a spiral shape, starting from the center and spiraling outward until the whole tin is covered.

This brings us to another kind of börek that gets rolled up:

Literally meaning “rose börek,” this one is a personal favorite of mine. The ingredients don’t change but the way it is prepared makes for a great portion and is an overall cleaner way of serving the dish. With each yufka, you get four small pieces of börek ready to serve. I’ll be giving you the recipe for my favorite minced meat version, I usually use beef, but there is absolutely no bounds to what you can stuff this with! If I end up with extra mushrooms, some lightly roasted chicken breasts, onion and the aforementioned mushrooms make for a great filling!

Chop your onions finely and roast them a bit with any fat of your choice and add the minced meat to it once they have softened. Sauté the meat until it is no longer raw and turn the heat off. Grate the potatoes after peeling them and chop the parsley and add both to the filling mix. Yes, the potatoes are added in raw. Season to your desire.

Cut your yufka into four pieces by first cutting them in half and then half again. You will end up with triangles with a round edge on one side. Take one of the triangles and spread a mixture of water and oil over it. Usually, one to two tablespoons are enough to cover it. Spread some of the filling along the rounded edge, and start rolling it toward the point of the triangle, but do not pull too hard. You want to have it loose enough to roll that long yufka piece into a spiral resembling a rose. Tuck the outer end of the yufka piece underneath the formed spiral and put it onto a baking tin, preferably lined with wax paper. Repeat until either the yufka or the filling is done. If you have plenty of yufka left over you can always add something else like cheese. If you have filling left over, you can make a delicious omelet the next morning by heating it up – and cooking the potatoes in the process – and adding eggs.

Speaking of eggs, whisk an egg or two and brush the börek with it. If you do not like egg coating you can of course skip this step. Sprinkling sesame and/or nigella seeds are optional as well but make for a nice little touch.

Bake at 180 degrees Celsius (350 degrees Fahrenheit) for about 20-30 minutes or until the börek has become golden brown. Let the pastries cool off a bit and serve!

While baking börek makes a lot of sense, you might be craving something more on the crunchy side. One crunchy kind of börek is çiğ börek, also known as çibörek. Usually, people make this one by making their own dough, as these are rather small and the dough is less of a hassle to roll out. This börek is filled with a mixture of beef, onions and parsley and as the name suggests, the filling is added raw (“çiğ” means raw). Close off the little pockets of meaty joy, fry them in oil and serve as soon as possible.

The second fried option that comes to mind is paçanga böreği. This one is done with yufka directly and is usually folded into the perfect little pocket. The difference here is it is usually filled with pastırma, a cured meat, kind of like pastrami (yes, etymologically speaking they are related), cheese and vegetables such as peppers and tomatoes. While you can eat çiğ börek a day later, paçanga can get a bit soggy if you had included tomatoes. Either way, this börek tastes great.

The last fried option I want to mention here is the famous sigara böreği:

Literally meaning “cigarette,” this kind of börek deserves the name as they are long and thin. Filled with white cheese, either feta or lor, and are fried like the other two mentioned above.

Chop the parsley very finely and crumble up the cheese as much as possible together with the parsley. Depending on your cheese, add a bit of salt or skip it altogether if the cheese is already salty. Now cut your yufka into 12 equal pieces by cutting the sheet in half to get two, again to get four and then into three pieces to get a total of 12. With these long triangles, take the wider end and put a bit of the cheese mix on there. Fold the sides in to avoid any spilling while frying and roll the whole thing tight, leaving just a tiny bit of the tip of the yufka free. Wet that with a bit of water and “glue” it onto the börek. Roll them all up in this manner and fry them in oil until they take on a light brown color. Let the excess oil drip onto paper towels and serve as soon as possible.

Who says that börek needs to be savory? I mean, aside from the obvious fact that baklava is essentially a sweet börek made with super-thin yufka, there are other kinds as well, of course. One of the most common kind you can find is “Kürt böreği.” Some call it “sade börek” or ditch the R to call it “küt böreği.” Whatever you call it, this kind of börek is essentially a börek without filling but served with a hearty helping of powdered sugar. Sounds simple enough – and it goes wonderfully with some black tea.

But there is another kind that needs mentioning:

Like Kürt böreği, the name of this börek also refers to an ethnic group, but this one is just special because it has pudding as its filling! It is a bit labor intensive if you make the dough yourself, but you can always substitute it with baklava yufka – 18 pieces should be enough, a package usually has much more depending on the brand.

Dissolve the sugar in the water and bring it to a boil. Let it simmer for five minutes, turn of the heat and add the lemon juice. Set it aside to cool off.

Set aside a bit of the milk and add the egg yolks, vanilla, starch, flour and zest, and mix until it is completely smooth. The rest of the milk should be brought to a boil and you can add the milky mixture into that. Now you need to constantly mix it to prevent it from burning until it thickens. Let it bubble for a minute or two and turn the heat off. Let the pudding cool off.

Oil up the baking tin of your choice and drape the first piece of this yufka to go over the edges. Melt the additional butter, mix it with the oil and brush some over it.

Proceed by adding a total of 17 layers of yufka while spreading some of the fat on each layer. Finally, add the pudding onto it and fold the first yufka’s corners onto the top. Roll out the last layer of yufka and close it off. Use the remainder of the fat and spread it all over the top. Cut the börek as desired and bake it at 170 degrees Celsius (340 degrees Fahrenheit) for about 30 minutes or until it achieves a golden brown color.

After removing the börek from the oven, let it cool off for five minutes and pour the syrup over it. Serve and enjoy!

So many more kinds!

I have barely scratched the surface of all the different kinds of börek that are out there. I can only encourage you to ask and have a taste whenever or wherever you get a chance to do so. One last börek I need to mention here, though, is “su böreği.” Literally meaning “water börek,” it is made a bit differently and reminds one of the layers of lasagna but with a cheese filling, copious amounts of fat and a crunchy exterior.