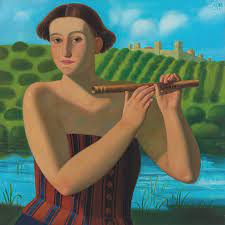 DUBAI (Arabnews): Dubai always finds a way to surprise its sceptics. This year’s 14th Art Dubai is one of the first large-scale art fairs to take place outside of the virtual realm since the start of the pandemic. Its success will indicate the strength of the market during these trying times.

Art Dubai opened its doors on March 29 in Dubai’s DIFC (Dubai International Financial Center). This was the fair’s home when it launched in 2010 as the Gulf Art Fair, before it moved to the Madinat Jumeirah.

As with other events now underway in the UAE, fair organizers have banked on the UAE’s high vaccination rate, with more than 50 percent of the population now vaccinated, a number second only to Israel, as ground to hold host the annual event for collectors and art enthusiasts that have, just like in previous years, flown in from around the world.

There have of course been several changes this year. All gallerists are tested twice for coronavirus, once before the fair opened and again during the fair. There are many hand sanitizer stations in each hall and attendees are urged to wear their masks at all times.

The fair’s structure and design also marked a break from its long-time home in Madinat Jumeirah’s Johara Ballroom. The 50 galleries from 31 countries — greatly scaled down from the 92 galleries from 80 countries at the 2019 fair — are on display this year in three long separated white tented halls. The smaller number of participants was approved by most attendees, with many fairgoers expressing a preference for the fair’s new, more compact design and easy to access location in the city’s financial district.

“We really had to innovate this year to bring Art Dubai to life,” fair director Pablo del Val told Arab News. “By moving to DIFC and changing our date by two weeks, we have been able to bring to life a physical fair with a re-configured format. This has allowed us to offer an exhibition of works for sale within an intimate, controlled environment that adheres to the latest safety measures. International galleries unable to attend in person due to travel restrictions have been able to take advantage of Art Dubai’s Remote Participation Program, whereby they have sent works for display on site and connected virtually with visitors at the fair.”

Some of the art world’s biggest names can be found at the fair alongside rising and established stars from the Middle East, Africa and Global South — regions Art Dubai has long worked to support.

Smiles were everywhere, as was relief at being able to congregate in-person once again at an art fair. Sales were swift on the first two days — the fair runs till Saturday, April 3.

At the French Galerie Perrotin, a first-time participant, works by world-renowned artists Takashi Murakami, Keith Haring, and Xavier Veilhan could be found, with a work by the photographer JR selling on the first day for $65,000. Nearby at Custot Gallery, gallery staff rejoiced on the first day with sales of two works by British artist Ian Davenport in the range of $90-100,000 dollars each and a small Fabienne Verdier painting for $100,00. A series of works by Indian artist Shilpa Gupta sold to an institution for $50,000 on the first day at Galleria Continua and several works by Iraqi-born artist Afifa Aleiby at Berlin and London-based Kristin Hjellegjerde Gallery for $50,000. London gallery Ronchini sold a Rebecca Ward work for $20,000.

Leila Heller Gallery, participating in the fair for the 14th year, raved about this edition’s “energy and curation.”

“So many artists were working during the pandemic and their creativity was boiling,” said Leila Heller. “They have expressed so much in their recent work.” She showed a booth featuring new works produced after the Beirut explosions by Lebanese artist Marwan Sahmarani, whose work is also on show at a pop-up space in Alserkal Avenue titled After the Blast, documenting what happened in Beirut on Aug 4 last year. Heller sold five works by Sahmarani in the range of $60-90,000.

“It feels like a real show of resilience to be here, after all the cancellations in 2020,” said Victoria Cooke, director of London and Accra-based Gallery 1957, who was participating in the fair for the third time. “We wanted to come to the fair with a sense of positivity and hope; we chose to bring Joana Choumali’s works — an artist who herself won the Prix Pictet award under the theme ‘hope’ — and Abdoulaye Konate, whose works emanate a sense of beauty wherever they are shown.” All of Ivorian Joana Choumali’s works sold by the second day in the realm of $9,000 to $14,000. The gallery is one of a number of spaces — Addis Fine Art, Tafeta and Akka Art Project — representing art from Africa, a key focus of the fair.

Many works on display were created during the global lockdowns of 2020 and the events that defined the year, particularly in the Middle East. At Saleh Barakat Gallery, for example, a large abstract expressionist painting by Iraqi-Kurdish Beirut-based artist Serwan Baran portrayed a scene of a destroyed car with the slight shadows of figures looking through debris, recalling the aftermath of the Beirut explosion.

“Art Dubai is embedded in the fabric of this unique city and plays an instrumental role in the development of the vibrant art and culture scene not only here in Dubai, but around the globe,” said Hala Khayat, Art Dubai’s new regional director.

For centuries Dubai has served as a strategic city for trade, placed at the crossroads between the Far East and the West. Like the city’s cosmopolitan character, Art Dubai reveals itself as a multicultural fair, offering a richness of artistic pedigree from Africa, the Middle East, Asia and Europe.

“We like to think of Art Dubai as the fair of discovery,” del Val said. “It is known for bringing together galleries that represent a large and varied global population, reflecting the multicultural identity of this city. The diverse collection of nationalities and communities that live in Dubai have a keen interest in seeing a representation of art from around the world.”