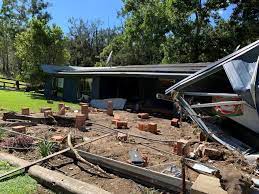 HOLLISDALE, Australia (Reuters) – Robert Costigan thought the worst was behind him when he saved two family properties from bushfires a summer ago.

This year, they floated away.

The homes of the Australian cattle farmer and his father-in-law Brian Watt, who lives next door, were swept off their foundations this month when heavy rains caused rivers to reach their highest levels in half a century, submerging bridges and buildings. Watt’s house slammed into a telegraph pole.

“If it wasn’t for bad luck I’d probably have none at all,” Costigan told Reuters at his 100-acre property at Hollisdale, 400km (249 miles) north of Sydney.

Days after the floods, the property was strewn with upended farm equipment, trees and debris.

“I don’t know whether it’s just someone testing me or what, but it is what it is I guess. You get through it,” he added, fighting back tears.

After years of drought devastated crops and livestock, they battled the country’s worst wildfires in a generation in the Southern hemisphere summer of 2019-20, only to face flooding amid a La Nina wet weather event this year.

The same river system Costigan pumped water from to save his house from the bushfires has returned to destroy it with flood.

Water levels have subsided but insurers have written off the building, with structural timber torn loose, tin roofs crushed and everyday objects – a mattress, a fluffy child’s toy – reduced to a sodden mess.

When the fires hit, the family kept safe in town as Costigan remained at the property in an effort to protect it. Now they are all staying with neighbours, homeless and heartbroken.

Two days before the house was swept away, Costigan’s daughter Eva had to cancel her 11th birthday party due to the flood.

“She was upset about that and then we had to tell her that she lost her house Saturday morning. All the presents that she got Thursday are gone,” Costigan said.

Still, the 39-year-old farmer, who also works for the local council, vowed to rebuild.

“I’ve worked too hard to just walk away from it,” he said.