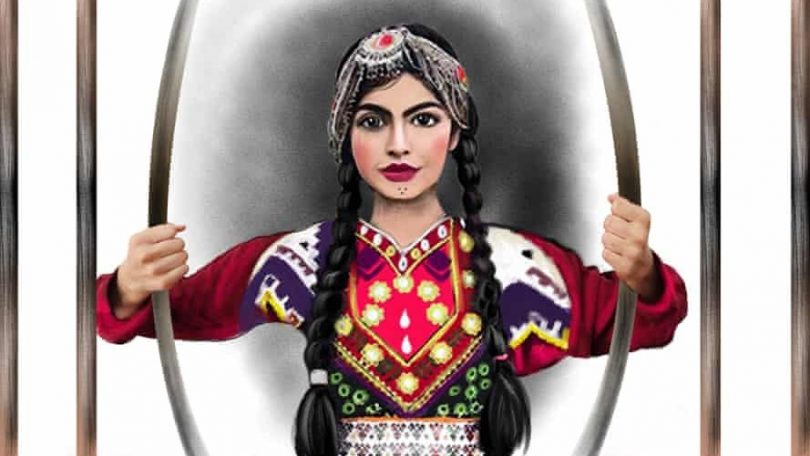 Woman in traditional dress breaks open the bars of a prison. A young child dances, oblivious to a backdrop of tanks and explosions. The drawings by Afghanistan’s first professional female animation artist, Sara Barackzay, reflect the struggles of her young life.

Barackzay, who lost her hearing as a child, left Afghanistan to study in Turkey, but has returned with the hope of starting a specialist school for animation arts.

Her topics include peace, war, women’s rights – and the animals from her childhood growing up among the family’s cats, rabbits, chickens and even frogs, she says.

“Afghan women try so hard – maybe even harder than others – to reach their goals. It’s one of the messages I want to communicate through my art,” she adds. “I always had big dreams, but fighting for them was never easy. Afghan women continue to face many limitations, and gaining my own freedom is possibly the biggest challenge I’ve faced – and it’s a struggle that continues. I am still finding my way.

“The other goal is to change perceptions about Afghanistan: my country is full of kind people, amazing food and an old culture, and that’s what I want to show to the world.”

Growing up in and around Herat in the north-west of the country – an ancient city with its historic Blue Mosque and old citadel – Barackzay started drawing at the age of four. Her parents had temporarily moved the family to a village outside the city after Sara’s birth, escaping Taliban rule, returning to their small brick house after the US-led invasion in 2001.

“The war was all present when I was a child,” Barackzay says. “My father helped me learn how to speak without being able to hear, but it was hard.”

Life changed when she was given a hearing aid at the age of eight and was able to join her sisters at school.

“It opened the world for me,” Barackzay says. She finished school at 15, then took university entrance exams, applying for a scholarship to study animation arts in Turkey, and persuading her family to let her study there when she received a fully funded offer.

“The Smurfs,” she says, “is how I learned Turkish as a child. I even watched television programmes in German, Arabic and English, and now speak all of these languages.”

Now she is teaching other young Afghan women her skills. “I even receive threats because of what I do, but I came back to Afghanistan to teach animation to other young girls and to one day open a university here,” she says.

Rising insecurity and the absence of good healthcare have affected her life, she says.

Fighting has increased in Afghanistan with more than 3,000 civilians killed last year alone, according to the UN. Violence has risen sharply recently, with targeted hit-and-run attacks killing more than 200 people since September. As the US considers a potential troop withdrawal in May, there are fears that fighting will escalate further.

“I dream of making the future easier for at least some girls in Afghanistan, and of joining Disney or Pixar as an animation artist one day,” Barackzay says. “But my number one dream remains for my country: lasting peace.”