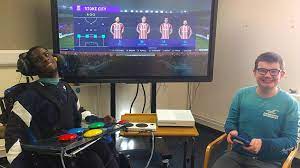 It comes after this year’s Association of Colleges’ FIFA Cup, which runs until May, included three disabled gamers.

It’s the first time gamers like Dan and Christopher (pictured above) have been able to take part.

Students play matches against opposing teams every week until May, and enter their results online.

After seeing students like Dan, from National Star college in Gloucestershire, taking part, BEA says it will push for wider accessibility for disabled gamers.

It says it will call on some of the biggest names in the technology industry to make that happen.

Tom Dore, from BEA, says: “We’re hoping that we can take what they’re doing as a pilot.

“We’re intending to speak to Microsoft about the opportunities to get a group of colleges like National Star involved in a pilot competition like this because the impact that they’ve seen is huge.”

Only a few years ago, it would have taken lots of money, specialist equipment and time to install an accessible controller if you have a disability.

Daniel has limited mobility in his hands and arms. He used adapted technology to take part, which was developed in 2018 by Microsoft.

It’s an Xbox Adaptive Controller, which has various switches he can control from the chair he uses everyday to take part in games.

The other players against him in the tournament weren’t aware of his disability.

Although Dan says it “means a lot” to him to be able to take part in the main Association of Colleges FIFA tournament, but he would prefer playing against other disabled gamers.

He says: “Being able to play real opponents is really hard because I play the game in a different way to them.

“I would like to be able to play against people who use the same technology as me so that it is fairer.”