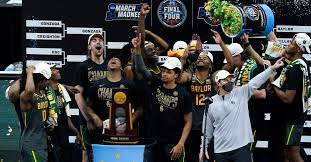 All-American Jared Butler (22 points, seven assists) was named the Tournament’s Most Outstanding Player, becoming the first player to drop 20 points and seven assists in the title game since Carmelo Anthony in 2003.

Wild stat No. 1: This was the fifth national championship game between the AP preseason top two teams — and No. 2 is now 5-0.

Wild stat No. 2: Since seeding began in 1979, Baylor is the third team to win the national title without any McDonald’s All-Americans, joining 2002 Maryland and 2014 UConn.

Between the lines: Baylor jumped out to a 29-10 lead behind a barrage of threes and an offensive rebounding clinic; and though the Bulldogs briefly narrowed that deficit, they never really made it a game.

Baylor led the nation in three-point shooting (41.2%) and had no trouble unleashing that weapon, starting five-for-five from deep and ultimately draining 10 triples. They’ve now won 34 straight games in which they’ve hit at least that many.

Gonzaga’s season comprised a record 27 consecutive double-digit wins, but after escaping with an overtime victory over UCLA, the magic wore off. Jalen Suggs’ buzzer-beater gave the Bulldogs their last lead of the season.

By the numbers: Baylor’s win gives the state of Texas just its second title (Texas Western, 1966).

There are still just seven undefeated champions, and none since Indiana in 1976. Gonzaga is the third team whose only loss came in the title game (1961 Ohio State; 1979 Indiana state).

The big picture: The game itself didn’t live up to the billing, but the fact that Baylor and Gonzaga were the opponents in such a highly-anticipated championship matchup is undeniably good for the sport.

Gonzaga’s transformation from a nobody to a perennial power and Baylor’s rebuild from a program devastated by scandal and tragedy to the class of a Power Five conference is the stuff of Hollywood, but we’re witnessing it in real time.

Blue bloods will always factor into the narrative — even in down years like this — and Cinderellas are what make March Madness so great. But the Bears’ and Bulldogs’ ascension shows there’s always room for a new story.