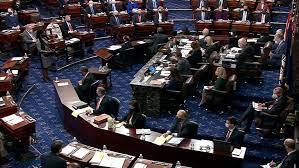 WASHINGTON (foxnews): The Senate approved a measure by unanimous consent Wednesday that would require the Biden administration and the director of national intelligence to declassify intelligence on the origins of COVID-19.

“The American people deserve to know about the origins of COVID-19,” Missouri Republican Sen. Josh Hawley said on the Senate floor before the Senate passed the amendment that was part of a broader bill. “They deserve to know how this terrible pandemic that has ravaged the globe and our country, how it got started, and what China’s role was in starting it.”

He said voters deserved to see the evidence and judge for themselves, rather than different speculation from various administration officials on where the virus may have come from.

“Whether it’s weighing in on issues of health care, national security, COVID-19, who disagrees with transparency?” asked Indiana Republican Sen. Mike Braun. “The sunshine reveals everything.”

In a statement before the vote, Biden said intelligence leaders were weighing two possible scenarios – that the virus either leapt to a human from contact with an infected animal or that it accidentally leaked from a laboratory in Wuhan, China. C

Democrats are getting nervous about ‘woke’ culture, analysts say

A New York Times opinion writer wondered in an op-ed Wednesday if the progressive cancel culture push will backfire on Democrats at the polls, and he isn’t the only analyst asking the question.

Edsall shared an email he received from social psychologist Jonathan Haidt arguing that the left-wing policies will only serve to drag down the party.

“Wokeness is kryptonite for Democrats,” Haidt wrote. “Most people hate it, other than the progressive activists. If you just look at Americans’ policy preferences, Dems should be winning big majorities. But we have strong negative partisanship, and when people are faced with a party that seems to want to defund the police and rename schools, rather than open them, all while crime is rising and kids’ welfare is falling, the left flank of the party is just so easy for Republicans to run against.”