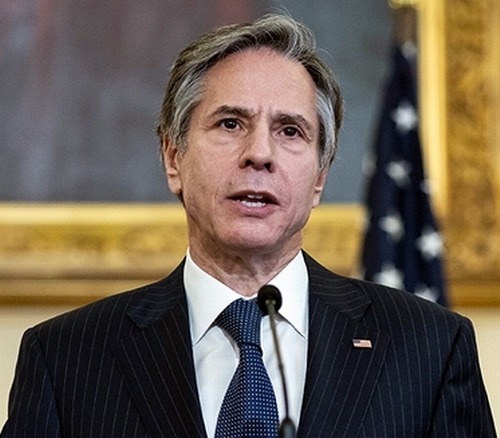 WASHINGTON DC: Secretary of State Antony Blinken on Sunday said “it would be serious mistake” for China to strike at Taiwan and expressed “real concerns” about Russia’s massing of forces on the border with Ukraine.

In addressing concerns about America’s two great Cold War rivals, Blinken stopped short of promising U.S. military intervention — “I’m not going to get into hypotheticals” — but did vow there would be “consequences.”

Speaking to host Chuck Todd on NBC’s “Meet the Press,” Blinken said of Chinese belligerence toward Taiwan, “We have a commitment to Taiwan under the Taiwan Relations Act, a bipartisan commitment that’s existed for many, many years, to make sure that Taiwan has the ability to defend itself, and to make sure that we’re sustaining peace and security in the Western Pacific. We stand behind those commitments.

“And all I can tell you is it would be a serious mistake for anyone to try to change the existing status quo by force,” he said.

China considers Taiwan to be part of its territory, something that has been the case since Mao Zedong’s revolution took over China in 1949 and the remnants of the old Nationalist regime fled to Taiwan, where they and their successors have been a thorn in China’s side for decades.

A similar dynamic has existed between Russia and Ukraine in recent years. Ukraine became an independent nation in the 1990s after the Soviet Union was dissolved. Vladimir Putin’s Russian government seized the region of Crimea in 2014, and there has fighting along the border for years now.

“As we speak right now,” Blinken told Todd, “I have to tell you I have real concerns about Russia’s actions on the borders of Ukraine. There are more Russian forces massed on those borders than at any time since 2014 when Russia first invaded. That’s why we’re in very close contact, in close coordination, with our allies and partners in Europe.”

In the wide-ranging interview, Blinken also said he expects the United States “to be the world leader on helping to make sure that the entire world gets vaccinated.”

Describing U.S. efforts to increase cooperation on the development and distribution of vaccines, Blinken said there would be costs to America if the world is not protected against Covid.

“Unless and until the vast majority of people in the world are vaccinated, it’s still going to be a problem for us,” he said. “Because as long as the virus is replicating somewhere, it could be mutating, and then it could be coming back to hit us.”

The world needs “to get to the bottom of” the origins of Covid-19, Secretary of State Antony Blinken said Sunday, and that means China still owes the world some answers.

“I think China knows that in the early stages of Covid, it didn’t do what it needed to do, which was to, in real time, give access to international experts, in real time to share information, in real time to provide real transparency,” Blinken said.

He added: “That’s why we need to get to the bottom of this.”

A World Health Organization report released last month acknowledged that WHO’s investigators had been unable to fully solve questions about the origins of the pandemic, which has killed almost 3 million people globally, including more than 561,000 Americans.

Reports during and after the WHO investigation indicate that China didn’t fully cooperate with the investigators.

Blinken said China’s lack of transparency, particularly at the beginning of the pandemic, made the situation worse than it would have been otherwise, producing “much more egregious results.”

Speaking to host Chuck Todd, he said the situation with China spoke to the need for a commitment to greater transparency in the future on international health issues.

“As we’re dealing with Covid-19,” Blinken said, “we also have to put in place a stronger global health security system to make sure that this doesn’t happen again, or, if it does happen again, we’re able to, to mitigate it, to get ahead of it. And that means making a real commitment to transparency, to information sharing, to access for experts. It means strengthening the World Health Organization, and reforming it so it can do that. And China has to play a part in that.”

When asked about Afghanistan, Blinken said that: First, the President is committed to ending this war, to bringing our troops home, and to make sure as we do that to the best of our ability that Afghanistan never again becomes a haven for terrorism and particularly for terrorism that targets the United States. That’s why we went there in the first place. That’s what brought us there.

Look, ultimately, any peace that is going to be lasting and that is going to be just has to be Afghan-led, and what we’re doing now is really energizing our diplomacy to try to bring the parties together – the Taliban, the Government of Afghanistan, other key players, but also countries in the region that have interests and influence in Afghanistan – to try and move in that direction. I don’t think anyone in Afghanistan, whether it’s the Taliban, whether it’s the government, and certainly not the people, have an interest in that country falling back into civil war. They’ve been in conflict for 40 years. If the Taliban, for example, wants recognition, if they want international support, if they are part of some kind of new government going forward in Afghanistan, that can’t happen; that support won’t be there.

So we’ll see how the parties calculate their interests. I think other countries also have to step up and help move Afghanistan in a positive direction.