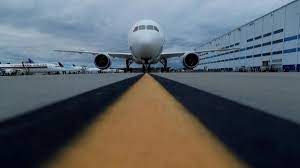 SEATTLE (Reuters) – Boeing Co has resumed deliveries of its 787 Dreamliner jets, handing over one plane to United Airlines on Friday, an initial step as the U.S. planemaker works through production defects that sidelined dozens of aircraft.

Reuters reported last week that Boeing remained on course to resume deliveries of a few 787s this month, which a Boeing spokeswoman said remained the goal.

The delivery from its South Carolina factory comes as Boeing undertakes painstaking repairs and forensic inspections to fix structural integrity flaws embedded deep inside dozens of 787s, issues which halted deliveries since October, cutting off a key source of cash.

The inspections and retrofits could take up to a month per plane and are likely to cost hundreds of millions – if not billions – of dollars, depending on the number of planes across the fleet that are impacted and the defects involved, sources told Reuters.

A United Airlines representative did not immediately return a request for comment.

The United Airlines 787 was one of those four FAA-inspected planes.