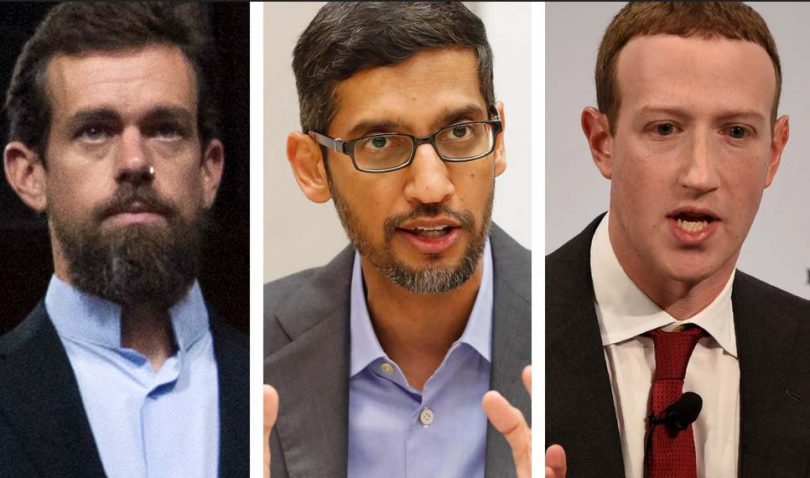 WASHINGTON (AP) — The CEOs of social media giants Facebook, Twitter and Google face a new grilling by Congress Thursday, one focused on their efforts to prevent their platforms from spreading falsehoods and inciting violence.

That’s been a familiar theme for lawmakers over the past few years. But the pressure is even higher following the Jan. 6 insurrection at the U.S. Capitol, the rise in COVID vaccine misinformation and united Democratic control of Congress and the White House. The latter could make legislative action more likely, although it remains far from a sure thing.

As malicious conspiracy theories continue to spread, lawmakers are pounding the social media companies over their market dominance, harvesting of user data and practices that some believe actually encourage the spread of engaging but potentially harmful misinformation. Some Republicans have also alleged, without proof, censorship and political bias against conservatives as another reason to rein in the enormous firms.

There’s increasing support in Congress for imposing new curbs on legal protections regarding speech posted on their platforms. Both Republicans and Democrats — including President Joe Biden as a candidate — have called for stripping away some of the protections under so-called Section 230 of a 25-year-old telecommunications law that shields internet companies from liability for what users post.

These executives testified on the subject at several congressional hearings last year, sometimes under threat of subpoena. This time they face tougher dynamics and may be called to account for earlier promises. In a Senate hearing shortly after the election in November, for instance, Zuckerberg and Dorsey gave lawmakers assurances of vigorous action against disinformation.

Banning a sitting president from social media was an unprecedented step. Of course, so was Trump’s heavy use of Twitter to lambaste opponents, laud supporters and spread false claims to more than 80 million followers. He was also only the second president to have a social media presence while in office.

Facebook hasn’t yet decided whether it will banish the former president permanently. The company punted that decision to its quasi-independent Oversight Board — sort of a Supreme Court of Facebook enforcement — which is expected to rule on the matter next month.

Republicans have stepped up their complaints of alleged censorship and anti-conservative bias at the social media platforms. Researchers say there’s no evidence that the social media giants are biased against conservative news, posts or other material, or that they favor one side of political debate over another.

Democrats, meanwhile, are largely focused on hate speech and incitement that can spawn real-world violence. An outside report issued this week found that Facebook has allowed groups — many tied to QAnon, boogaloo and militia movements — to extol violence during the 2020 election and in the weeks leading up to the deadly riots on the Capitol.

The report from Avaaz, a nonprofit advocacy group that says it seeks to protect democracies from misinformation, identified several hundred pages and groups on Facebook that it says spread violence-glorifying material to a combined following of 32 million users. Facebook acknowledged that its policy enforcement “isn’t perfect,” but said the report distorts its work against violent extremism and misinformation.

The tech CEOs plan a spirited defense of the liability shield under Section 230, saying it has helped make the internet the forum of free expression that it is today. Zuckerberg, however, will also again urge Congress to update that law to ensure it’s working as intended. He’s adding a specific suggestion: Congress could require internet platforms to gain legal protection only by proving that their systems for identifying illegal content are up to snuff.

“Instead of being granted immunity, platforms should be required to demonstrate that they have systems in place for identifying unlawful content and removing it,” Zuckerberg said in written testimony prepared for Thursday’s hearing.

It’s not clear lawmakers will buy that argument. Sen. Ron Wyden, an Oregon Democrat, charged that Zuckerberg’s plan would entrench giant firms at the expense of smaller rivals. “Everyone working to address real issues online should be deeply wary about Mark Zuckerberg’s proposals for new regulations,” Wyden said in a statement.

Pichai and Dorsey have urged caution about any changes to Section 230. Regulation is important to protect the open web while curbing its harmful use, Pichai said in his written testimony. But he warned that many reform proposals “would not serve that objective well,” and could inadvertently harm free expression and limit the platforms’ ability to protect users.

Dorsey didn’t directly address the issue in his written statement, but did respond to recent questions about how Twitter should handle world leaders who violate its policies. “We are currently re-examining our approach to world leaders and are soliciting feedback from the public,” he said in the statement.