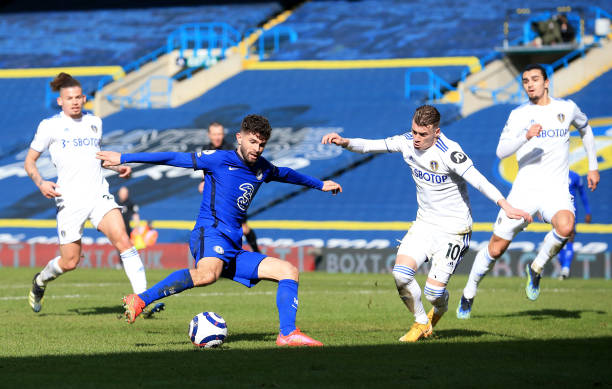 LEEDS (Agencies): Chelsea missed a chance to cement their place in the Premier League’s top four as Leeds held them to a frustrating 0-0 draw on Saturday.

Thomas Tuchel’s side had plenty of chances but couldn’t deliver the knockout blow in a hard-fought clash at Elland Road.

The Blues remain in fourth place and fifth-placed West Ham are just three points behind them with two games in hand as the race to qualify for the Champions League looks set to go down to the wire.

Tuchel is now unbeaten in 12 matches in all competitions since replacing the sacked Frank Lampard in January. With clean sheets in their last five games, Chelsea have conceded only two goals in that period.

However, their goal-scoring issues under Tuchel resurfaced as opportunities came and went in the Yorkshire rain. They have yet to score more than two goals in any match in the Tuchel era. Wednesday’s Champions League last 16 second leg against Atletico Madrid at Stamford Bridge — with Chelsea holding a 1-0 lead — will be another stern test of their renaissance under the former Paris Saint-Germain boss.

Tuchel made six changes from Monday’s win against Everton as Christian Pulisic replaced Timo Werner after reports the United States winger was unhappy with his lack of action since the German took charge.

On Friday, Tuchel had urged Pulisic to seize his chance when it came, saying of a player he worked with at Borussia Dortmund: “He is in my plans. When the moment comes you have to be ready.”

Leeds and Chelsea have been fierce rivals since their brutal FA Cup final clash in 1970, but the absence of fans due to the coronavirus lockdown diluted the Blues’ first league visit to Elland Road since 2003. The poor quality of the Elland Road pitch was almost reminiscent of the battles on fields of mud that defined Chelsea’s encounters with Leeds in the 1970s.

Pulisic wasn’t fazed by the rutted surface as he scampered down the right and whipped over a low cross that Kai Havertz poked straight at Leeds keeper Illan Meslier.

Leeds launched a penetrating counter immediately after Havertz’s miss and Patrick Bamford’s cross was turned in by Tyler Roberts, only for the offside flag to come to Chelsea’s rescue.

If that was a stroke of luck for Chelsea, Leeds benefitted from their own good fortune moments later when Diego Llorente whacked a clearance against team-mate Luke Ayling, with the ball looping onto the crossbar before falling into the grateful Meslier’s arms.

As ever with Leeds and their wide-open style, chances came thick and fast and Roberts was inches away from opening the scoring when Chelsea keeper Edouard Mendy tipped his curler onto the bar. Chelsea defender Ben Chilwell fired just wide from the edge of the area before Mason Mount’s 25-yard drive was pushed out by Meslier.

Havertz finally delivered an influential display against Everton after a wretched first season with Chelsea. But the Germany forward was back to his diffident worst here and shot tamely at Meslier from Hakim Ziyech’s pass. Granted space by the statuesque Leeds defence, Havertz should have done better with a close-range blast that Meslier palmed over early in the second half.

Mendy saved well when his former Rennes team-mate Raphinha had a sight of goal from Rodrigo’s knock down.

Chilwell had a golden opportunity to break the deadlock, but he scuffed wide with just Meslier to beat after surging into the area.

Antonio Rudiger’s hopeful effort from 30 yards sent Meslier sprawling to save, while Callum Hudson-Odoi was denied by the keeper as Chelsea’s challenge petered out.