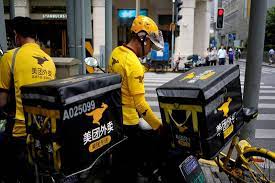 BEIJING (AFP): Regulators have launched an anti-trust probe into Meituan, one of China’s biggest food delivery firms, they said Monday, as Beijing clips the wings of its soaring tech companies.

The probe was prompted by reports that Meituan allegedly engaged in forced exclusivity agreements with vendors, the State Administration for Market Regulation said in a statement. Those were among its “suspected monopolistic behaviours”, the regulator said.

E-commerce titan Alibaba was hit by a record 18.2 billion yuan ($2.78 billion) fine this month after facing a similar charge.

The woes of Meituan, which counts gaming giant Tencent as a shareholder, is the latest sign that China’s assault on big tech is far from over.

Beijing has taken the country’s tech firms to task in order to curtail the reach of private companies into the public’s daily finances and — analysts believe — to rein in their runaway expansion as well as the status of their super-rich founders.

Two weeks ago the regulator warned 34 technology giants — including Baidu, Tencent and Meituan — to “rectify” any anti-competitive measures, prompting a series of public pledges to abide by anti-monopoly guidelines.  Regulators told internet companies to “heed the warning of Alibaba’s case”.

Alibaba too had come under fire for forcing the practice of “choosing one of two” on retailers — where merchants are compelled to work only with one platform and not its rivals. Companies such as e-commerce platform JD.com have since pledged to avoid such behaviour.

Alibaba and JD.com, along with messaging and gaming giant Tencent, have become hugely profitable on the back of growing Chinese digital lifestyles and government restrictions on major US competitors in the domestic market.

But as the platforms amassed hundreds of millions of regular users, concern has risen over their influence in China, where they are used for a huge array of daily tasks.

Fintech firm Ant Group, an Alibaba affiliate whose planned record-shattering $35 billion Hong Kong-Shanghai IPO was shelved late last year, also announced this month it would comply with an overhaul outlined by regulators and become a financial holding company — meaning it will be supervised more like a bank in the future.