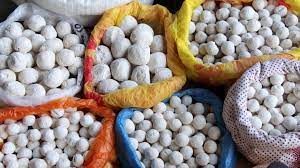 As a child in newly independent Kazakhstan, I yearned to snack on candy bars, soft drinks and anything foreign and packaged. Instead, my mother would buy salty, sour snacks that resembled white chocolate truffles, but were in fact hardened balls of sour cheese. At local bazaars, I’d see aunties cheerfully selling small batches of these homemade goods packed in cellophane.

A Central Asian dry cheese made of fermented milk, qurt is a versatile treasure of nomadic people’s ingenuity. There are variations of names for this food, including kashk in Iran, chortan in Armenia, and aaruul in Mongolia, as this calcium-rich, protein-packed snack accompanied travellers along the Silk Road and beyond.

But the origin of qurt is the road itself. Born out of necessity, the nomadic people of Central Asia carried horse, sheep or camel milk in animal-skin saddle bags called torsyk. Journeys across the vast steppe provided a perfect setting for fermentation to take place inside this vessel, and the galloping motion of the horse gave a churning effect that separated the milk into curds. These curds, drained, dried and lightly salted, packed all the nutrients of the liquid dairy product into a solid, portable food.

This by-product of milk born on the Silk Road has been a staple of strength and resilience to Kazakhs and others ever since.

While Kazakhstan’s nomadic way of life mostly dissipated after it joined the Soviet Union in 1920, its ancestral recipes remain. Today, along with kumys (a cold fermented dairy drink), qurt is eaten either as a snack or dissolved in water or broth, adding a rich and creamy sourness to drinks, soups and stews. Its milk protein content of choline and methionine along with calcium makes the nutritious snack popular among young children and the elderly. Some people shave qurt over salads and pastas as a cheaper, locally sourced alternative to parmesan, and parents give sweet, dried-fruit versions to their kids instead of candy. The demand for qurt spikes around 21-23 March, when people celebrate Nauryz (spring New Year).

But whether qurt is eaten as a snack or for a special occasion, ultimately the reason Kazakhs buy it is to get a taste of home.

Qurt is traditionally prepared by combining a yoghurt-like fermenting agent with freshly boiled milk. Up until the early 20th Century, when the majority of Kazakhs lived in yurts spread over pastoral lands, people would gather together to make large batches of the cheese, wishing for prosperity and hoping that their families would persevere through the harsh winter.

Though some Kazakhs continue to maintain a semi-nomadic lifestyle, today homemade qurt is usually prepared in modern-day kitchens during spring and summer when livestock are grazing and milk is abundant. The boiling process starts in the morning, and by the afternoon, the reduced milk by-product is rolled into small balls that are placed in woven reed baskets to dry in the sun and wind. The end result is lightweight and thus easy to transport, and can last for years without refrigeration.

When eaten fresh, up to a week from making it, qurt has a soft consistency and a subtle flavour. The longer it dries, the harder it gets. According to Kazakh ethnographer Aigerim Musagazhinova, properly prepared qurt shouldn’t be so dry that it’s impossible to bite. “It should be dry on the outside but when you bite into it, it’s soft, tender and fresh,” she said. Perhaps the most commonly described taste of qurt is associated with salt and acidity. “When we even talk about [qurt] we get a similar sensation in our mouth as you might when thinking of lemons,” Musagazhinova added.

Musagazhinova recently published a book that features more than 50 lost recipes and traditions of Kazakh cuisine. Her extensive, 13-year research included two years of field trips to every corner of Kazakhstan, where she interviewed the custodians of culture and tradition in their homes. Musagazhinova distinctly remembers that nearly every family would lay qurt at the table as an accompaniment to the meal. “I’d grab two or three pieces of it for the road, and to this day I carry qurt in my bag even when I’m not travelling,” she said.

Indeed an 1872 historical account of Kazakhs by the Russian Empire’s ethnographer and translator Shagimardan Ibragimov notes how Kazakh riders would tie a pouch filled with qurt to their saddles. “It is such a unique product that saved Kazakhs from the famine [1919-1922 and 1930-1933] which is why I believe it’s in our genetic code,” Musagazhinova said. “During the early days of the pandemic, and still, the demand for qurt rises,” she added. “People searched for qurt and kumys, which is telling of their beneficial properties.”

Beloved across the nation, qurt is often prepared with camel’s milk in western Kazakhstan, where camel breeding is prevalent. In northern Kazakhstan it is common to find qurt with added berries, dried fruit and nuts, which are common to the region. In the south, due to the hot climate, plenty of salt is added to preserve it. And qurt’s size and shape vary depending on the hand preparing it.

For me this cheese is a link to my ancestors. When I make qurt I can feel my grandmother’s presence.

“My grandmother would make it in a way that her fingerprint would leave a mark on each one,” said Zhanslu Zhienbayeva, a large-scale qurt producer from northern Kazakhstan. She remembers being 10 years old and asking her grandmother to be neater when rolling the cheese. As she grew up and got a knack for making qurt herself, she realised that the dents left on them aided the drying process.

Zhienbayeva’s memories of making qurt with her grandmother are imbued with nostalgia. The youngest of five children, she would climb onto the roof of her home with trays of rolled-out qurt under a cheesecloth. After a few hours of drying in the sun, she’d pass the qurt to her grandmother to determine if it was ready. “For me this cheese is a link to my ancestors,” Zhienbayeva says. “When I make qurt I can feel my grandmother’s presence. As qurt became my livelihood, its value to me is priceless.”

Qurt’s legacy goes far beyond beloved family traditions. One of the best-known stories about qurt took place in a WWII labour camp – today a museum named ALZHIR – in northern Kazakhstan’s Akmolinsk region for the wives and children of Russian and German prisoners of war. According to a story told by one of the camp’s German prisoners, Gertrude Plaitas, whose memories were later written into a poem by Raisa Golubeva, locals would see these women and children working in the fields and, saddened by their plight, they would throw pebble-shaped pieces of qurt at them. At first the prisoners thought that locals were throwing rocks out of malice. But later they realised that these rocks were edible, helping the prisoners survive another day.

“When I first read the poem, I had tears in my eyes,” said Zhienbayeva. It inspired her to travel to the camp museum, where she heard the story once again, picturing the women who would go to work hungry during a harsh winter. “Women had to lay and hide in the stems of sage, and one woman sensed the dairy smell,” Zhienbayeva told me.

Today, new takes on the salty snack are bringing it onto supermarket shelves in vacuum-sealed packages. One of the people doing that is Nagima Zharylkasymova. A former primary school teacher, she took her fourth-grade students to a farm in Shymkent that produced dairy products, among which was qurt. “They got to see the animals, the process of preparing it, and their curiosity rubbed off on me,” Zharylkasymova said. Now retired from teaching, she runs a small qurt business with her four daughters-in-law, putting a spin on the traditional product by producing the balls in green, orange and purple hues, derived from sorrel, pumpkin and beetroot extracts that add extra nutritional value to the snack.

“My unique and colourful qurt immediately stands out at weddings and celebrations,” she told me with great pride.

The matriarch of the family, Zharylkasymova knows the importance of connecting over traditional foods. Each day, she rolls out qurt with her 14 grandchildren, who nibble on the crumbled pieces. They talk about their days, her grandchildren asking their grandmother about the cheese. “I get so happy because my grandchildren are understanding the hard work their grandma does, and they’re forming a connection with me,” Zharylkasymova said.

This sense of connection has become more important to me as I, too, have got older. So many times, at dinner tables and celebrations, I declined this small, sour token of tenderness. My childhood desire for everything foreign led me to New York City, the land of gastronomic exploration. But every so often, as I yearn for home, I get a familiar sour taste in my mouth. I think of my grandmother who’d sneak it in my meals, of my classmates who brought it to share during recess and of my ancestors who journeyed across the steppe carrying this ingenious, versatile cheese.