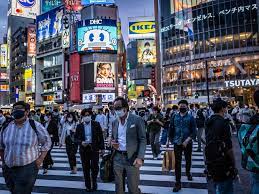 BEIJING (Insider): China put in place a slate of strict measures to fight COVID in the southern port city of Guangzhou on Monday night in an attempt to suppress a potential fresh wave of cases and avoid the fate of other Asian countries struggling to curb the virus.

Strict travel restrictions came into effect at 10 p.m. local time on Monday, and mandate that the Guangzhou residents show proof of a negative COVID test within 72 hours before traveling out of the Guangdong province.

Guangzhou is a sprawling Chinese city located around 80 miles northwest of Hong Kong. It boasts a population of 15.3 million residents – nearly twice the size of New York City – and is situated within Guangdong, home to around 115 million people.

The new restrictions resulted in some 500 flights being canceled at Guangzhou and Shenzhen’s airports, per the South China Morning Post.

The Chinese authorities attributed these new cases to the fast-spreading and deadly B1617 COVID variant first detected in India, reported the SCMP. The news outlet noted that mass testing is in progress across Guangdong province, with detailed COVID screening and swabbing procedures for Foshan and Shenzhen cities in particular.

“The rapid spread is the biggest difference between this epidemic and previous epidemics; the strong spread of the virus is reflected in the fact that the virus can be spread by eating a meal and short-term indirect contact.” Zhang Zhoubin, the deputy director of the Guangzhou Center for Disease Control, said at a May news conference.

A reporter for the Chinese news site Yicai referred to the spread of the virus as the “morning tea transmission chain” because the cases were linked to a “refreshment cafe.”

Chinese authorities are not taking any chances; the country s likely implementing strict controls to avoid the fate of other East Asian nations like Japan and South Korea, which have been consistently logging hundreds of cases in daily.

Separately, mounting cases in the run-up to the Tokyo Olympics prompted the government to put nine prefectures – Tokyo, Kyoto, Osaka, Aichi, Fukuoka, Hiroshima, Hokkaido, Hyogo, and Okayama – under a state of emergency in the first week of May. At press time, Japan recorded 747,223 COVID cases and 13,006 deaths.

Both South Korea and Japan have posted sluggish vaccination rates due to slow roll-outs and supply bottlenecks. As of June 1, Japan has only vaccinated 2.6% of its 126.3 million population, while 4.1% of South Korea’s 51.7 million people have been inoculated.

Several “COVID zero” havens – countries that have consistently managed to keep their case numbers down by aggressively closing borders and limiting exposure to the virus – are now struggling to cope with a renewed resurgence in cases.

Taiwan, for instance, recorded a 253-day streak of zero COVID-19 cases from April to December. But earlier this year, the country saw an uptick of cases. On May 31, for example, the Taiwan Centers for Disease Control logged 278 new cases. Thus far, the TCDC has recorded 8,511 cases and 124 deaths in a country of 23.5 million.

On May 14, Singapore also rolled out a fresh suite of controls, including a ban on dining out and strongly regulated safe-distancing measures, to curb the spread of COVID after a troubling surge in unlinked cases carrying the B1617 variant. These measures were implemented just two weeks after Bloomberg said Singapore was the best place to be during the pandemic because it had at the time negligible COVID transmission levels within the community.

Like Singapore and Taiwan, China’s COVID response has been shaped by a COVID Zero approach, in which even one case is too many. But countries like the UK and the US have begun treating COVID as an endemic problem in which people are learning to live with the virus rather than waiting to eradicate it completely before resuming normal life.

While the instances of fresh cases in Guangzhou do not come close to the 2020 explosion of COVID cases in Wuhan, China is still moving quickly to reify its COVID Zero approach.

The country reported its first local cases in three weeks on May 13, when two cases were detected in Lu’an city in the eastern Anhui province, which prompted a round of mass COVID testing for the city’s residents.

Smaller-scale outbreaks of COVID cases in the southwestern Yunnan province on April 26 were also met with aggressive mass-testing measures and immediate city-wide lockdowns for 72 hours.

China was previously the epicenter of the COVID pandemic, but it kept its cases largely under control for months. This lull in case numbers led to a boom in domestic travel during its five-day labor day holiday from May 1 to 5, which saw 230 million domestic trips taken across the country.

The country managed to control the number of locally-transmitted community cases by quickly isolating imported cases under a strict “14+7” day quarantine procedure, where travelers to China must spend 14 days at a facility and a further week of self-quarantining at home.

The SCMP reported on May 19 that the country is ramping up its vaccination rollout, with some 15 million COVID shots being administered daily. On May 24, the Chinese government also announced that it administered 546 million COVID vaccine doses, inoculating around 19.5% of its 1.39 billion-strong populace.