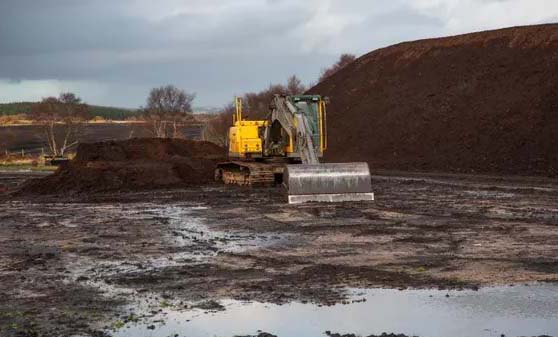 LONDON: The UK government must ban the sales of peat compost this year after its goal of a voluntary phaseout by 2020 proved an “abject failure”, according to a group of gardening experts, conservationists and scientists.

Peat bogs store huge amounts of carbon and must be retained to help tackle the climate crisis. In a letter to the environment secretary, George Eustice, seen by the Guardian, the group say the UK as host of the UN climate summit talks this year should show leadership on the issue.

The Easter weekend is traditionally the biggest gardening weekend of the year, and the first coronavirus lockdown in 2020 is estimated to have created 3 million new gardeners. In a survey by the Wildlife Trusts published on Friday, just one of the 20 leading garden retailers – Travis Perkins – said it would end peat compost sales in 2021. The trusts said there was no sign of the government’s long-awaited peat strategy.

“In 2011, the government set voluntary targets to end sales of peat-based compost for domestic use by 2020. This has been an abject failure,” said the letter to Eustice signed by the TV gardeners Alan Titchmarsh, Kate Bradbury and James Wong, the conservationist Isabella Tree and dozens of others. “If the government wants to show global leadership on the climate crisis before it hosts the Cop26 climate conference, this is a vital step.”

Prof Dave Goulson, a scientist at the University of Sussex who drafted the letter, said: “Allowing this precious store of carbon to be pillaged so that we can grow ornamental flowers is a needless environmental travesty, given that there are high-quality peat-free alternatives available.”

UK peatlands hold more than 3bn tonnes of carbon, three times more than UK woodlands, but only about 20% remain in a near natural state. As well as extraction, draining of the bogs and fens for farming and forestry, overgrazing, and burning of heather on grouse shooting estates have damaged peatlands.

Peatlands grow by the slow buildup of plant material in waterlogged landscapes. Their degradation means they are losing more carbon than they are gaining.

Craig Bennett, the chief executive of the Wildlife Trusts, said: “Countless promises have been broken and targets missed, with the result that precious peatland habitats are still being unnecessarily destroyed in the name of gardening. The time for delay and excuses is over. The government can ensure these important carbon stores function as nature intended by banning peat sales now.”

In November the gardener Monty Don called peat in compost “environmental vandalism” and joined the National Trust, the Royal Horticultural Society and other groups in calling for a ban. The government’s voluntary target for the horticulture sector was to end sales to gardeners by 2020 and to end professional use of peat – for example, in plant growing – by 2030.

A spokesperson for the Department for Environment, Food and Rural Affairs said: “We are committed to phasing out the use of peat in horticulture in England by 2030 and we urge all gardeners to play their part and only use peat-free products. We will consider further measures to end the use of peat, and will be consulting on these measures this year.”

The Wildlife Trusts survey received responses from 11 of the 20 retailers contacted. Only two declared an end-date for peat sales: Travis Perkins in 2021 and Wickes by 2025. B&Q and the Blue Diamond group of garden centres said they were committed to phasing out peat but gave no date.

Asda, Lidl and others said they had targets to reduce peat sales but not yet to end them. Wyvale Garden Centres, Morrisons and Sainsbury’s were among those that had not responded to the survey by the time of publication.